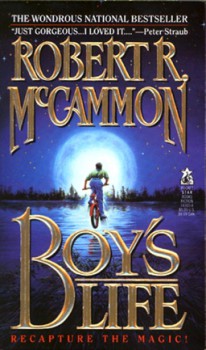 See, this is my opinion: we all start out knowing magic. We are born with whirlwinds, forest fires, and comets inside us. We are born able to sing to birds and read the clouds and see our destiny in grains of sand. But then we get the magic educated right out of our souls. We get it churched out, spanked out, washed out, and combed out.

And so begins the best piece of writing I’ve come across.

In the seventies and the eighties, Robert R. McCammon was a successful horror author. Usher’s Passing (a sequel to Poe’s classic), Wolf’s Hour (World War II werewolf yarn) and Swan Song (post-apocalyptic epic) were among his excellent works. 1990’s Mine was a different kind of terror tale, as was 1992’s Gone South.

To oversimplify, McCammon wanted to move out of horror and into new genres. And he was told to forget it: to not mess with the formula (shades of Brian Wilson and Pet Sounds). So he wrote two historical novels that weren’t published and he quit.

A decade later, that first historical book, Speaks the Nightbird finally saw the light of day in 2002 and has spawned four sequels. McCammon has written a few other novels and novellas, back in the horror genre. But he returned on his own terms, and not with a major publishing house. He has a new novel coming out in May of this year.

Two thousand is probably a pretty low estimate of how many books I’ve read, and the single finest piece of writing I’ve ever come across is in the introduction to 1991’s Boy’s Life. Which isn’t really too surprising, because that is the finest book I’ve ever read; in any genre. It’s not a horror book: it’s a book about the magic of our youth. And what happens to that magic. You ask me for only one book to read (beyond the Bible), and I’m telling you Boy’s Life.

Here’s the rest of that snippet from the opening that has stayed with me for going on three decades:

After you go so far away from it, though, you can’t really get it back. You can have seconds of it. Just seconds of knowing and remembering. When people get weepy at movies, it’s because in that dark theater the golden pool of magic is touched, just briefly. Then they come out into the hard sun of logic and reason again and it dries up, and they’re left feeling a little heart sad and not knowing why. When a song stirs a memory, when motes of dust turning in a shaft of light takes your attention from the world, when you listen to a train passing on a track at night in the distance and wonder where it might be going, you step beyond who you are and where you are. For the briefest of instants, you have stepped into the magic realm.

These memories of who I was and where I lived are important to me. They make up a large part of who I’m going to be when my journey winds down. I need the memory of magic if I am ever going to conjure magic again. I need to know and remember, and I want to tell you. 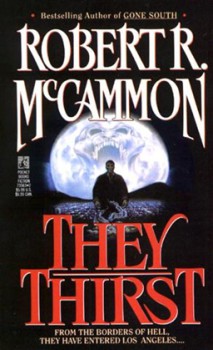 Ethereal. Poignant. Wistful. Insightful. Magical. McCammon taps into something rare with this, and he hasn’t even started chapter one yet.

A murdered body is found in Zephyr, Alabama in the summer of 1964 and young Cory Mackenson’s life changes. Full of compelling characters, interesting events and wonderful prose, McCammon weaves a magical tapestry with his superb storytelling and writing facility.

I got my copy out for this post and skimmed over a few story points. There was one that I had completely forgotten about that made me marvel at McCammon once again.

Cory has a friend named Ben. Cory tells him a story about martians that cut into the back of people’s heads and change them. Ben’s dad sees a comet and goes out to find it with a buddy. Ben, crying, begs his dad not to go. He knows he’ll come back changed.

Cory tries to tell him it’s okay: it was just a story. But Ben is emotionally wrecked. And McCammon pays this off like the brilliant author he is. It’s powerful: just like the whole book.

Boy’s Life would be a marvelous miniseries. However, Universal bought the rights, forever, before the book was even published. Which was odd, because they’ve never even attempted to use the property. So, it’s unlikely to make it to any screens. On a side note, Frank Darabont wrote a script for Mine over a decade ago, but can’t get it made. Which is unfortunate, since the guy knows what he’s doing.

If you take one thing away from The Public Life of Sherlock Holmes (well, besides the awesomeness of John D. MacDonald and that Solar Pons is well worth reading), make it a promise to read Boy’s Life. I really don’t think you’ll be disappointed.

There’s a poem even before the introduction. It captures the feel of the book:

We ran like young wild furies,
where angels feared to tread.
The woods were dark and deep.
Before us demons fled.
We checked Coke bottle bottoms
to see how far was far.
Our worlds of magic wonder
were never reached by car.
We loved our dogs like brothers,
our bikes like rocket ships.
We were going to the stars,
to Mars we’d make round trips.
We swung on vines like Tarzan,
and flashed Zorro’s keen blade.
We were James Bond in his Aston,
we were Hercules unchained.
We looked upon the future
and we saw a distant land,
where our folks were always ageless,
and time was shifting sand.
We filled up life with living,
with grins, scabbed knees, and noise.
In glass I see an older man,
but this book’s for the boys.

Best…Book…Ever!
I have read this book twice, and will read it again soon. It is a book that gets better each time. And when I read it, I can feel the ‘magic’ return to my soul. This is the gateway back to when everyday was magic. And McCammon is the magician.

@thedarkman – I dug out my hard bound copy for this post (the paperback is beyond worn). And after I re-read the scene about Ben’s dad going out to the woods, I read the scene where Cory first hears ‘I Get Around.’

And the journey down the train tracks.

And then the scene with…

This book is just full of writing that tugs on your emotions.

I like Mystery Walk and Bethany’s Sin, et al, but Boy’s Life is just an amazing work.

[…] at The Public Life of Sherlock Holmes, I talked about my favorite passage from my favorite book. Robert R. McCammon’s Boy’s Life is a real […]

Today (September 28, 2015) only, you can buy this amazing book in any of three ebook formats for only $1.99. If you actually read this post, you know this is a superb deal.