Last week, I wrote about John Cleese’s Elementary, My Dear Watson. I’m struggling through my re-watch of his The Strange Case of The End of Civilization as We Know It (I thought it was bad on first viewing: nothing has changed my mind this time around), so that isn’t ready to go yet. So, here’s the first of several posts related to a Mystery Writers of America Grandmaster: the late Tony Hillerman.

“I was writing episodically because this short book stretched about three years from 1967 to 1970 from first paragraph to final revision – with progress frequently interrupted by periods of sanity – probably induced by fatigue and sleepiness. Most of my efforts at fiction were done after dinner when the kids were abed, papers were graded and the telephone wasn’t ringing.

Sometimes, in those dark hours, I would realize that the scene I finished was bad, the story wasn’t moving, the book would never be published, and I couldn’t afford wasting time I could be using to write nonfiction people would buy.

Then I would pull the paper from the typewriter (remember those?), put the manuscript back in the box, and the box on the shelf to sit for days, or some times a week, until job stress eased and the urge to tell the story returned.”

So did Tony Hillerman, decorated World War II combat veteran, former newspaper reporter and then-current university teacher, very slowly, write The Blessing Way. Hillerman is not a Navajo. He’s a Caucasian who grew up in a small Oklahoma village on land belonging to the Potawatomi tribe. He went to the local Indian school for first through eighth grade and from an early age had no prejudices against Indians. They were just kids, like him. It shaped the character that let him write about the Navajos in a realistic and sympathetic manner. They aren’t simply stereotypes in a mystery book.

When Hillerman finished The Blessing Way, he sent it off to his agent, Ann Elmo, who had placed numerous nonfiction articles for him. She didn’t want him to write a novel. He should stick with nonfiction. She told him the book was bad and it wouldn’t sell as a mainstream novel or as a mystery. When he asked what he could do to improve it, she suggested “getting rid of all that Indian stuff.” 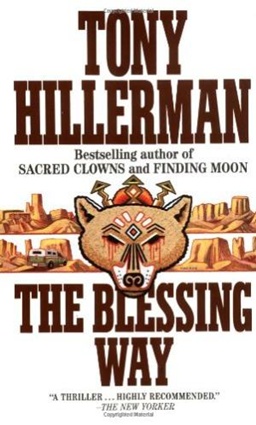 Practically speaking, it wasn’t bad advice for the time. Indians in fiction were just the enemy in westerns. The traditional “study your markets” advice would have stopped Hillerman cold. But he thought that the Navajo ‘stuff’ was the good part of the whole thing. He sent the manuscript to Joan Kahn, the legendary editor at Harper & Row. She told him that if he could come up with a better final chapter, they would publish it.

That’s telling. Hillerman hadn’t liked the first ending he wrote. He had tried again, and didn’t like that one, either. He had actually started a third, but just wanted to be done with the book, so he went back and picked the ‘best of the bad finished chapters’ and completed the novel. And Joan Kahn knew it wasn’t up to snuff.

Hillerman reworked it, expanded the role of Joe Leaphorn, his Navajo policeman, and he ended up with his first novel in print. He would write seventeen more in the series before succumbing to cancer in 2008 at the age of 83. His daughter, Anne, has continued the series with two more books so far.

Hillerman originally titled this book The Enemy Way. Which is the Navajo ceremonial performed in the story. Harper & Row wanted him to suggest eight additional titles. He did so, even though The Enemy Way was printed right there on the manuscript’s front page. For some reason, they decided that number seven, The Blessing Way, was better, after first considering Monsterslayer. Who understands publishing companies?

Hillerman had really wanted to write his version of The Great American Novel, about a newspaper reporter. But he thought that a mystery would be easier to write, so he decided to do one and then try his ‘important book.’ That’s almost condescending.

He did go ahead and write The Fly on the Wall after The Blessing Way. But even before he finished that first novel, he knew he wanted to write another book in which he got the Navajo part “right.” And in Dance Hall of the Dead, Leaphorn is front and center. He carries the book from the beginning and the series finds its center. I’ll be doing a separate post on Fly, which is one of my top ten favorite novels.

On the odd chance this post makes you want to go start reading the series, I don’t recommend starting with The Blessing Way. Leaphorn is a supporting character and the protagonist is actually a Caucasian anthropology professor. While it is a good book, it’s probably the least of the series and certainly the least typical. I recommend the Edgar Award winning second novel, Dance Hall of the Dead. Then go back to The Blessing Way, or book number three, Listening Woman. After you’ve read those three, you’re ready to move on to People of Darkness (one of my favorites), which features a new hero, officer Jim Chee. He stars in the two ensuing novels before Leaphorn and Chee work together in book seven (Skinwalkers).

The next post in this series will focus mostly on Leaphorn and the first three Navajo Police novels featuring him. But for now we’ll look at Hillerman’s thoughts on outlining. 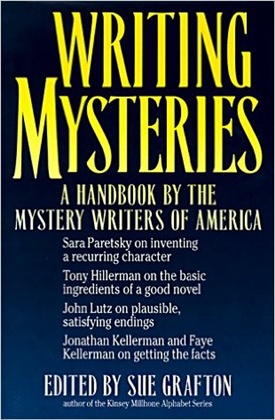 Hilllerman tried hard to be an outliner, but he found he was a panster (so-called ‘writing by the seat of your pants’). He wrote the essay “Building Without Blueprints” for Writing Mysteries: A Handbook by the Mystery Writers of America. “Some people, sometimes, can write a mystery novel without an outline. Or, put more honestly, if you lack the patience (or brains) to outline the plot, maybe you can grope your way through it anyway, and sometimes it’s for the best.“

He had attempted to outline his first three books (Blessing Way, Fly on the Wall and Dance Hall of the Dead) but failed. So, he outlined a couple of chapters ahead and slogged his way through to the finish of each. He tried to outline the fourth, Listening Woman, and was stuck. So he decided to start writing the first chapter. He did so. And it didn’t work, so he rewrote a new opener. And again a third time, changing the outline as he went. More changing for the second chapter. And the third. Finally, he accepted that his writing style did not benefit from an outline.

Now, some writers need one, some don’t (I find I get stuck less if I’ve got a decent outline). But Hillerman listed the ingredients that let his imagination come up with what he needs:

A setting with which he is intimately familiar;
A general idea of the nature of the mystery to be solved;
A theme; and
One or two characters – in addition to the police protagonist.

Hillerman lets the story take him where it will. Janet Pete unexpectedly popped into being in Skinwalkers and certainly impacted Jim Chee’s life. This approach may not work for everyone, but it does for Hillerman.

In addition to exploring Joe Leaphorn, in the next post, Hillerman will provide a humorous look at some excellent, but useless, first chapters he has written.

Thanks for a great post on Hillerman. He is one of my favorites. Love the background information about his development as a writer and his advice about writing.

Richard – A friend gave me Thief of Time many years ago and I just thought it was really ‘neat.’ I’d never heard of Hillerman, but it was unlike all the other mystery books I’d read. So, I went back and started from The Blessing Way. Just a great series – a few books aren’t as good as the others, but that’s true of everyone (even Rex Stout). I have several of these on CD and listen to them every couple of years during the work commute. Haven’t gotten tired of them yet (though I prefer the unabridged readings).

His autobiography, Seldom Disappointed, is a really interesting book. I’d say maybe two-thirds is about his pre-fiction writing life. I enjoyed it quite a bit.

The next post is primarily about the Leaphorn books and the early feel of the series.

I am really enjoying re-reading these again (I’m on The Dark Wind at present). I have the first one by Anne Hillerman but haven’t read it yet.

I wish I had the three PBS movies Robert Redford made to rewatch: that would be another post.

What timing. For a post on first novels, I decided just a couple of days ago to reread Blessing Way. You’ve covered everything I might have said in that post, so when I write it I’ll just link here.

The Leaphorn books are favorites, but apart from Dance Hall of the Dead, I haven’t reread any.

R.K. – I always remembered somewhat that the first book was split between McKee and Leaphorn. But until I re-read it, I had forgotten how it really was McKee’s book, not Leaphorn’s. Then I dug into a couple interviews Hillerman gave and remembered that he had originally given Leaphorn a much smaller part then was included in ‘The Blessing Way.’

I think that Fly on the Wall is a superb example of a second novel. His newspaper experience really shone through.

Hillerman’s agent literally refused to handle The Blessing Way. She said it would make both of them look bad.

But he was determined to find a home for it and “cold-queried” Kahn. Which would be like me telling Otto Penzler I have a Holmes book I’d like to send him. Except I know Otto a bit.

Hillerman believed he could write a novel, and it could be about Indians. And he was right.

[…] This week over at Black Gate, ‘The Public Life of Sherlock Holmes’ (that’s me) talked a bit about Tony Hillerman. Years ago, a friend gave me a copy of Thief of Time, which I thought was a captivating book. I went back to the beginning of the Navajo Tribal Police series, The Blessing Way, and continued reading the series until Hillerman died of cancer in 2008. His daughter, Anne, has written two additional books since his passing. […]

The second post in the Hillerman series. I delve into Joe Leaphorn this time around. And Hillerman talks about perfect, useless first chapters.