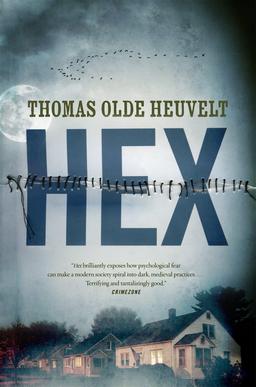 Last year Dutch writer Thomas Olde Heuvelt won a Hugo Award for his story “The Day the World Turned Upside Down.” During my lengthy discussion with Tor editor Liz Gorinsky, who edited Cixin Liu’s novel The Three-Body Problem (which won the Hugo for Best Novel last year), I learned that she was also editing Heuvelt’s first book to be published in English, the horror novel HEX.

Liz seems to have an unerring sense for foreign SF and fantasy that will appeal to an American audience. I trust her taste implicitly, and I find myself very intrigued by HEX. It was a bestselling novel in its original Dutch version; the English edition arrives in hardcover from Tor next week.

Whoever is born here, is doomed to stay ’til death. Whoever settles, never leaves.

Welcome to Black Spring, the seemingly picturesque Hudson Valley town haunted by the Black Rock Witch, a seventeenth century woman whose eyes and mouth are sewn shut. Muzzled, she walks the streets and enters homes at will. She stands next to children’s bed for nights on end. Everybody knows that her eyes may never be opened or the consequences will be too terrible to bear.

The elders of Black Spring have virtually quarantined the town by using high-tech surveillance to prevent their curse from spreading. Frustrated with being kept in lockdown, the town’s teenagers decide to break their strict regulations and go viral with the haunting. But, in so doing, they send the town spiraling into dark, medieval practices of the distant past.