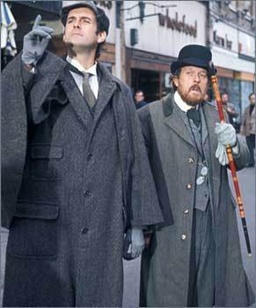 John Cleese is best known, of course, as the sardonic Q opposite Pierce Brosnan’s James Bond in Die Another Day. Though not as well remembered, he also played a key role in the British comedy troupe, Monty Python.

On January 18, 1973, the final episode of Python’s third season aired. It was Cleese’s last episode with the group, which would continue on for one more season. That very same same day, Cleese’s next project aired – Comedy Playhouse Presents: Elementary, My Dear Watson. It was produced by Barry Took, who had brought the Python members together.

I’m going to tackle the Achilles heel (really, it’s more like the entire torso) of this show, the plot: or rather, the lack of one. It’s barely a story. Try to stick with me, and no, I’m not leaving things out: it really goes like this…

The show opens in a room full of dead lawyers, slumped over their desks, each with a knife in the back.  Some would say that’s a pretty good start, but let’s stay focused. Thus the show’s subtitle, The Strange Case of the Dead Solicitors. A policeman and a secretary exchange what are intended to be witty comments, which immediately brings the lame laugh track to the viewer’s attention. This is not the most robust laugh track you’ll come across.

The scene switches to Baker Street where Cleese (an acceptable looking Holmes) is dining with his Watson, well played by William Rushton. Though there is no audience laughter, I enjoyed Watson’s comment about frequently neglecting his practice to dash off on one of Holmes’ hair-brained schemes, while still managing to live comfortably. That’s a funny in-joke.

After asking Watson what year it is (he looks at his watch and replies, “1973”), Holmes summons a cab, which pulls up to the curb: it’s a horse-drawn hansom and Holmes makes a reference to Doyle, letting us know that they know they’re in a television show. There’s more of that.

For Holmes has been summoned by a Lady Cynthia to her country estate, where the old family curse of a deadly rattlesnake has started up again. The snake is killing various animals. What?

But en route, Holmes and Watson are pulled into the case of the dead solicitors. While they are pushing a desk with a dead solicitor from London to Manchester to the studios of the tv game show, Call My Bluff, (the actual cast appears and lampoons their own show) Fu Manchu gets into the act. I’m not making this up!

Fu Manchu ends up with the desk and the body, while Holmes confuses the Euston and Paddington train stations and he and Watson end up riding back and forth all over England. 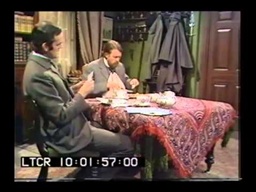 Holmes, annoyed with his deerstalker, throws it out of the train window and it lands on the dead solicitor being pushed along by Fu Manchu and his henchman. They fear Holmes is on to them! Inexplicably, Holmes had sewed the letter with Lady Cynthia’s address into the hat, and now they won’t be able to find her house. So, they go back and look for it. Um…

Animals keep dying at Lady Cynthia’s estate (all in the same room, which is supposed to be a funny visual. Didn’t do much for me.) and she fears her son will be the next victim. Her frantic calls to the police provide no help. The train mishaps have resulted in Holmes and Watson spending three days going nowhere and finally her son is bitten and dies. Soon, all her animals and son dead, we see her menaced by a rattlesnake as she tells it a story to try and keep it from attacking her. She lies about here age. Ha ha ha.

Holmes makes a wild series of deductions with no logic whatsoever, yells “There’s not a moment to lose” and rushes out the door: falling right off the train.

In a full-leg cast, arm in a cast and head wrapped from the fall, Holmes and Watson confront Frank Potter, a reformed piano tuner who is actually Moriarty in Elizabethan drag. There’s something about piano tuning, which is the offense that put Potter in jail. Piano tuning is a crime? They convince Potter/Moriarty to come with them to help tune a piano. I don’t get it.

We shift to Fu Manchu, loading five crates, correctly labeled as dead solicitors with knives in backs, onto an airplane. Lady Cynthia, on the phone with the police, screams. The snake had killed her as well. Everyone there is dead.

Watson is now dressed as Cyrano De Bergerac (I think), so that all three men look ridiculous and if confronted, can pretend they’re escapees from the nearby asylum. That’s probably the most believable element in the plot.

Moriarty gets a phone call on the way leaves the group. He’s being booked for a show at the London Palladium. The less-than-dynamic duo arrives at the airport as Manchu’s plane takes off and Watson observes that they are too late. “I think not, Watson. Reverse the film!”

And yes, the film runs backwards, the evil doctor backs right into a police van, which takes him away, and the case is solved. Uh huh. The Prime Minister goes on television, congratulating the film editors for saving the day, under instructions from Holmes.

At Baker Street, Holmes tells Watson that Frank Potter/Moriarty had nothing to do with the case. He was merely a red herring to fill in time so that the script wouldn’t be five minutes short. Watson drinks from a glass in each hand, tells Holmes that he never ceases to amaze him and Holmes says, “Elementary, my dear Watson.” And the show ends.

John Cleese clearly knows sketch comedy. And he was just wrapping up his brilliant run in Monty Python. But a thirty-minute collection of “bits” with a practically non-existent plot doesn’t really make a television show. I’ll let you watch it to find out why Fu Manchu was trying to get five dead solicitors, slumped over their desks with knives in their backs, to China. Hint – they are presents. 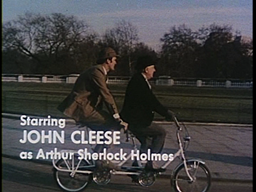 Some things aren’t funny, or just don’t make sense, or both. Why is Jack the Ripper constantly calling Scotland Yard to make a statement? At his house, Moriarty makes a lewd comment and shoos out a blonde wearing only a towel. Watson leers at her as she goes up the stairs and he has to be called in to the other room by Holmes.

However, there is some humor in this show and it’s worth watching. Holmes’ observation of a particular type of mud found on Manchu’s elbow is an amusing dig at Doyle’s penchant for that type of thing. I think that Watson’s comments are among the best lines throughout the show and Rushton is a pretty good parody Watson without being a bumbling fool.

Josephine Tewson, playing Lady Cynthia, appeared in another Holmes parody. She played the nun in the miserable Peter Cook/Dudley Moore Hound of the Baskervilles. THAT was a dog.

It isn’t much of a surprise that the show did not get picked up. I can’t imagine what they would do on a weekly basis when they couldn’t even come up with a plot for a thirty-minute pilot. Two years later, Cleese would star in the short-lived but much funnier Fawlty Towers.

Elementary, My Dear Watson, was not Cleese’s only attempt at spoofing Holmes, though it was his best. In 1975, he played Arthur Sherlock Holmes (the detective’s grandson) in The Strange Case of the End of Civilization as We Know It. The only reason I don’t call it the worst Holmes-related film ever, is because I’m not sure whether the aforementioned Cook/Moore Hound deserves the title, or if Strange Case (next week’s topic) does.

I consistently cite Without a Clue as an example of how to do Holmes parody well (in fact, excellently). Sherlock Holmes’ Smarter Brother is also quite well done. And on the other hand, the Cook/More Hound is Holmes parody as crap. Elementary, My Dear Watson falls somewhere in the middle of that scale.

You can watch Elementary, My Dear Watson on Youtube. It does have enough funny bits to make it worthwhile, but as a thirty-minute comedy show, it comes up short.

The prior entries for Holmes on Screen here at Black Gate:

I’m a Cleese fan, but was not aware of this show. (I also didn’t realize, until reading your article, that Cleese was not in the final season of Monty Python. Since he kept doing the Python films and live events post-series, I just assumed he was there throughout the show’s run.)

P.S. I can’t imagine the final season of Python being all that great without him. Rattle off all the most iconic Python skits and I think Cleese is in virtually every one of them. I mean, that would be like the Marx Brothers without Groucho Marx.

Nick – Have you seen ‘Strange Case of the End of Civilization as We Know it’? Ugh!

To me, Arthur Lowe was the perfect Watson.

Phubarrh – I’m planning on rewatching ‘Strange Case’ this week for next week’s post. I don’t remember Watson much.