Back in July, what seems to be the most popular ‘The Public Life of Sherlock Holmes’ post appeared here at Black Gate. I looked at what I think went wrong with season three of the BBC’s Sherlock. I included the just-released ninety-second, ‘first look’ video for the upcoming Special, to be aired around Christmas. And I pointed out it seemed to be full of the “Look how clever we are” bits that I lamented in my post.

Now, just about everyone, including myself, loves that the Special is set in Victorian times; unlike the episodes in the first three seasons. Cumberbatch and Freeman would be given their first (and quite likely, only) opportunities to play Holmes and Watson in the Doyle mold. I view it as a chance for the show to get back on track and reclaim the multitude of fans it lost during season three.

That trailer was a fun little look at the Special and a second trailer came out earlier this month. “Fun” is not a word I would use. This is clearly not going to be a cute little Christmas episode, or a hunt for the owner of a goose and a hat (not a goose with a hat). In fact, it’s not about the yuletide at all. As you can see, it’s going to be some very serious business.

Visually, it’s dark. The lighting isn’t too strong and there seems to be a lot of night action and poorly lit interiors. I think there’s a secret society thing going on in underground meeting chambers, but it’s hard to tell. But I like what I see and I think Cumberbatch and Freeman are going to excel.

I’ll leave the scene-by-scene dissections to other Sherlockians. But I do want to speculate on one thing. Co-creator Steven Moffat made it clear that there won’t be any time-travel twist and that “The special is it’s own thing… It’s not part of the run of three episodes.” Meaning it’s not an official season four episode. It’s sort of a stand-alone, “bonus” episode.

But I’ve been thinking of some explanations Moffat and Mark Gattis could offer to have it fit in and be ‘BBC Sherlock Canon,’ if you will. Or even if you won’t. So, here we go!

The Tardis – Moffat and Gattis are helming both Doctor Who and Sherlock. I don’t watch Doctor Who, but about a million fans of both shows have been clamoring for a crossover. One fan even created a pretty darn good one.

In this scenario, the Doctor brings BBC Holmes and Watson back to Victorian London to solve some dastardly crime or prevent some horrible wrong occurring. Perhaps we learn this at the very end of the episode, when we see the Tardis in the distance, or the background, as our two heroes walk off in triumph.

One of the first Holmes pastiches I ever read was Robert Lee Hall’s Exit Sherlock Holmes, in which Holmes and Moriarty were time travelers from the future. So, it’s been done before.

It’s Elementary – The most popular Doctor was also a Holmes. You read about it here, naturally. 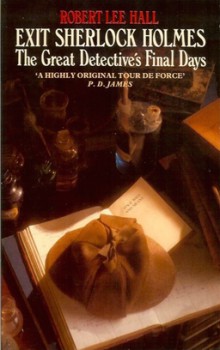 It’s a ‘Dallas’ – Younger folks may be unaware that Dallas was a tv show before the most recent, recently incarnation was cancelled. And it was massively popular. The entire ninth season turned out to be a dream that Victoria Principal’s character had.

Holmes and Watson come out on top in the Special, which ends with Sherlock waking up in his modern bed. He comes to his senses and we realize the whole case in the past was a dream. Sherlock says, “What a horrid time. I could never have lived back then.”

Everybody Dies — Clearly, getting Cumberbatch and Freeman to find time in their rapidly contracting schedules is becoming more and more difficult. Rather than continue to suffer the slings and arrows of disgruntled Sherlock fans who are waiting poorly (not patiently, poorly), Gatiss and Moffat decide to simply wrap things up with no warning.

So, Holmes and Watson die in the Special. It’s announced that there will be no season four and the show is done. You want to talk about shock effect? And about an enraged fan base!

It’s All About A Study in Pink – In the climax of the series pilot, based on Doyle’s novel, A Study in Scarlet, Holmes was about to take a pill that was either harmless or poison (he took neither). It’s well known that the good Dr. Watson made necessary changes to the stories he recounted to readers in the pages of The Strand Magazine.

Cocaine Induced – This is similar to the hallucinogenic explanation. Watson clearly tells us that Holmes was a cocaine user (a 7% solution) when they began rooming together. Holmes overdoses (a 14% solution?) and the entire Victorian Era adventure is just the creation of a cocaine-addled brain.

I’m sure readers can come up with more scenarios, but these are a few that could fit the bill.

You can click here for links to all twenty-one posts related to Holmes on Screen so far.

Please – just let it be a stand-alone. No Tardis, no drug hallucination, no Holmes waking up next to Suzanne Pleshette and telling her about his dream. They have one chance to finally do things right. I’m begging them to choose wisely.

By the way, it’s for sale on Amazon as a stand-alone, so it won’t be some bonus feature on a future fourth season set, should they actually have a fourth season. (Personally, I hope they don’t. They’ve already done too much damage to Holmes already!)

And it looks like the Special will be shown in select movie theaters around the world. That’s pretty cool!

[…] Bob Byrne’s “The Public Life of Sherlock Holmes: Tying in the BBC Sherlock Special” at Black Gate has a lot of good […]