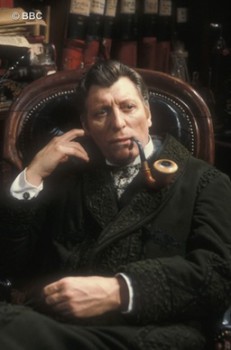 The BBC recently held a ‘Best of Doctor Who 50th Anniversary Poll’ and Tom Baker came out number one. This is a bit surprising, as he roamed in the Tardis from 1974 to 1981, which was over three decades ago. And less relevant but still of note is that the Doctor never really broke big in America until David Tenant took on the role.

After Baker gave the Doctor up for regeneration, the BBC approached him and asked what project he would like to do next with his popularity still soaring. Baker immediately replied, “Sherlock Holmes,” and traded his scarf for a deerstalker.

The BBC hadn’t tackled The Hound of the Baskervilles since Peter Cushing’s second attempt at it for his 1968 television series (a role he secured after failed attempts to land Robert Stephens and Eric Porter). There had been an American TV version in 1972 starring a dull Stewart Granger with Bernard Fox as yet another doofus Watson who mumbled his lines.

Fox is better known as Colonel Crittenden in Hogan’s Heroes and the pilot Winston in Brendan Fraser’s The Mummy. A recently unemployed starship captain played Stapleton.

Baker would star in a four-part, two-hour mini-series of The Hound. This adaptation is more faithful to Doyle’s story than any other filmed attempt. And Baker acquits himself well. However, there’s a peculiarity about The Hound that creates a potential Achilles heel. And Baker’s version is peppered with arrows from Paris.

Sherlock Holmes is off-screen for a significant part of this tale. Which means that the casting of Dr. Watson and Sir Henry Baskerville is crucial. Peter Cushing’s 1959 big screen version is an example of how to do it correctly (Andre Morrell and Christopher Lee). Sadly, this Watson and Baskerville cripple the production, to Baker’s detriment. 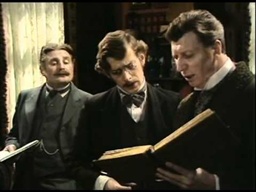 Terrence Rigby joins the long list of ineffective Watsons who mumble their way through the role. I’ve yet to understand why so many actors feel that the good doctor is incapable of speaking clearly. Or why he must constantly wear a clueless expression. Doyle did not write the character that way.

Rigby is completely forgettable. He would be a lightweight Inspector Leyton (who?) the following year in Ian Richardson’s version of The Sign of Four.

But Nicholas Woodeson (Skyfall, John Carter) was terribly miscast as Henry Baskerville. The balding, 5’4” actor yips his way through the movie like a small terrier. He’s barely up to Baker’s nose. I cannot think of a worse Sir Henry. You almost find yourself rooting for the hound in the end.

And it’s simply too much to overcome. Holmes is missing for approximately an hour: that’s half of the miniseries! Rigby and Woodeson are simply not up to the task of carrying the production and it’s too late for Baker to salvage things when he takes center stage. 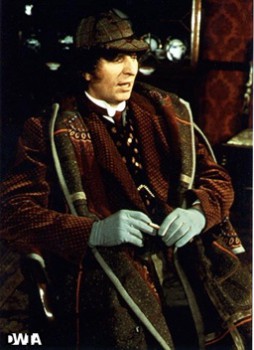 This is singularly unfortunate, however, as Tom Baker is a solid Holmes.

He had dressed up as Holmes in a Doctor Who episode, The Talons of Weng Chiang. This time, he got to don the deerstalker and Inverness without all of that hair and they fit him well. Baker manages to convey Holmes’s superiority without being too condescending, like, say, Douglas Wilmer or Benedict Cumberbatch.

The look he gives Dr. Mortimer when the latter asks if he may run his finger along Holmes’s parietal fissure is spot on. Baker does not have Jeremy Brett’s antic disposition or Robert Downey Jr’s sarcasm. He delivers Doyle’s lines as the reader expects to hear them voiced.

The general perception is that Baker’s performance was flat and he’s not held in high regard. True, it is a reserved Holmes, but not a bad one. I would very much have liked to see Baker given the chance to play the role in one of the short stories; where he’s the centerpiece and there’s more detective work.

In fact, had Baker been given a chance to inject some of the Holmesian-like persona he displayed in The Talons of Weng-Chiang (and lost a few pounds as well), I think he would have made a popular Sherlock. 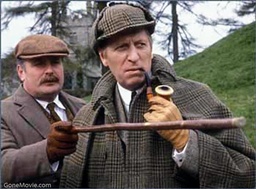 Not surprisingly, this production did not generate excitement and Baker’s stint as the world’s first private consulting detective was brief. Ian Richardson’s superior version followed the next year, Jeremy Brett’s A Scandal In Bohemia aired in 1984 and Baker’s Hound was quickly forgotten.

Baker’s version of The Hound has never been made available on VHS or DVD. Fortunately for us, it has been posted to youtube. Otherwise, it would be virtually unseen.

It’s hard to recommend this version because the script is a bit dull and Watson and Sir Henry are terrible. But the seeds of a fine Holmes are there in Baker’s performance, so it’s worth a watch.

IT’S ELEMENTARY – Baker is not the first actor to play both Dr. Who and Sherlock Holmes. Peter Cushing was Holmes on the big screen (Hammer’s 1959 Hound of the Baskervilles), in a television series (BBC’s 1968 Sherlock Holmes) and in a TV movie (1984’s The Masks of Death).

And in 1965 (Dr. Who and the Daleks) and 1966 (Dalek’s Invasion Earth 2150 A.D.), he played Dr. Who on the silver screen. However, because the movies were not affiliated with the television series, Cushing is not considered an official Dr. Who.

OK, you made me laugh out loud at that Shatner caption. And kudos for the shout out for Dr. Flurry!

I can’t count the number of times I’ve voiced Dr. Flurry as I played with my son and his League of Incredible Vegetables figures.

I’d like to see a show of William Shatner on stage, doing famous lines and speeches from plays and novels. Heck, I’d pay for this one:

To those who haven’t read the four novels (novellas, really) Sir Arthur Conan Doyle wrote about his detective: there’s an absence of Holmes.

The first Holmes story written was ‘A Study in Scarlet.’ A full half of the book is a flashback about Mormons in Utah. Holmes and Watson are completely absent.

The second story, ‘The Sign of Four’, includes a long flashback about the Sepoy Mutiny in India. Again, no Holmes and Watson.

The third novel (written while Holmes was officially “dead”) has Holmes missing for over a third of the novel. Watson is present and does a pretty decent job of carrying the load.

The fourth novel (and my favorite), ‘The Valley of Fear’, contains a long flashback taking place in a mining area in Pennsylvania. Yep: no Holmes or Watson.

It seems that Doyle didn’t know how to write a novel that featured Holmes the same way the short stories did. Which makes filming the novels a bit challenging.

If you’re starting out to read Holmes, I suggest beginning with The Adventures and the Memoirs. After you finish those, then I’d go back and read STUDY and SIGN. They aren’t bad novels. But they’re not as good as the short stories and I’ve had friends who began with those give up on Holmes before they got to the short stories.

Funnily enough, Baker also played Holmes in a farce written by the Irish playright, Hugh Leonard (of ‘Da’ fame) – ‘The Mask of Moriarty’ – the play’s premiere, if memory serves me correctly.

@Aonghus – I didn’t know that. I did find a link to a few pictures from the production:
http://www.tom-baker.co.uk/pages/js_gallery/index.asp?gid=5

I think I wrote something somewhere about an aborted attempt to turn that into a film; perhaps with Ian Richardson starring. Can’t find it, though.

Thanks for the link, Bob!

I’m curious what you think of Rathbone as Holmes? Sure he only acted in one proper adaptation – coincidentally,’The Hound of the Baskervilles’- but still…

While I find Bruce annoying just by breathing (even in the two period pieces from Fox) I think that Rathbone was one of the finest Holmes’.

He offered a lot more vitality than Wontner had (another favorite) and the stories were generally fun, if un-Canonical. Not all the plots were great, but none were total clunkers. And I don’t think you could single out a bad performance by Rathbone himself.

I also think that Rathbone is a great radio Holmes, both in the original stories and new tales. I quite enjoy listening to him.

Though Clive Merrison is my favorite radio Holmes. Hmm…there’s a future topic.

I always thought Rathbone was great but I know what you mean about Bruce. Unfortunately Watson is one of those parts that seems to bring out the ham in the best of actors.* It’s just a little bit too easy to play him as a bumbling duffer instead of a straight man (straight, I hasten to add, in the sense that he is a foil to Holmes’ brilliance, but that doesn’t make him a fool). Interestingly enough, somebody involved in the Cumberbatch version said he reckoned Watson was always of the harder of the two to cast.

Two period pieces? I stand corrected. What was the other one?

* totally off-topic, but I’ve noticed the same thing about anybody playing the part of Lizzie Bennett’s mother in ‘Pride and Prejudice’.

[…] Last week, we looked at Tom Baker’s relatively unknown Hound of the Baskervilles. As this post is being published on May 26, which is the birthday of a classic Holmes, we’ll look his version of The Hound. For on this date in 1916, Peter Cushing was born in Surrey. […]

[…] Last week, we looked at Tom Baker’s relatively unknown Hound of the Baskervilles. As this post is being published on May 26, which is the birthday of a classic Holmes, we’ll look his version of The Hound. For on this date in 1913, Peter Cushing was born in Surrey. […]

[…] Elementary – The most popular Doctor was also a Holmes. You read about it here, […]