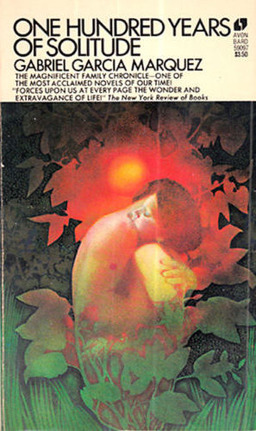 I was reading Salman Rushdie’s cover article in the Sunday issue of The New York Times Book Review yesterday when I stumbled on a fascinating quote.

Rushdie’s article, “Magic in Service of Truth,” isn’t really about fantasy — not directly, anyway. It’s a tribute to the magical realism of Gabriel García Márquez, and especially the setting of his most famous novel, One Hundred Years of Solitude. Márquez, who won the Nobel Prize for literature in 1982, died on April 17th, and Rushdie’s article is a thoughtful look back at the career of the man whom the President of Colombia recently called “the greatest Colombian who ever lived.”

But Rushdie’s article is fascinating for other reasons as well. He is one of the most respected writers of the 21st Century — indeed, for several months after the publication of The Satanic Verses in 1988, and the fatwā issued by Ayatollah Khomeini in 1989, he was perhaps the most famous author on the planet — and in the midst of his tribute to Márquez, he casually admits we are living in a literary Age of Fantasy.

We live in an age of invented, alternate worlds. Tolkien’s Middle-earth, Rowling’s Hogwarts, the dystopic universe of The Hunger Games, the places where vampires and zombies prowl: These places are having their day. Yet in spite of the vogue for fantasy fiction, in the finest of literature’s fictional microcosms there is more truth than fantasy. In William Faulkner’s Yoknapatawpha, R.K. Narayan’s Malgudi and, yes, the Macondo of Gabriel García Márquez, imagination is used to enrich reality, not to escape from it.

I read the article in in the newsprint edition, but you can read it online here.