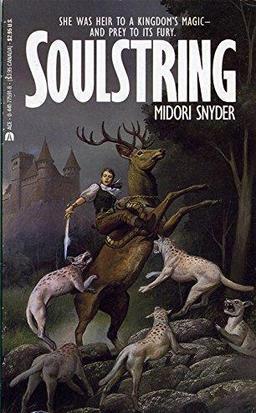 Midori Snyder is the author of eight fantasy novels, including the Oran Trilogy (New Moon, Sadar’s Keep, and Beldan’s Fire), and The Innamorati, which won the Mythopoeic Award in 1999.

Her first novel was Soulstring, a fairytale fantasy based on the Scottish legend of Tam Lin. It was one of many American fantasy novels to draw on that source in the 80s and 90s, but it had the good fortune to have a great cover by Segrelles (click the image at right for a bigger version), and get solid notices. It launched her career, but sadly has remained out of print since its original paperback appearance in 1987.

Her power could ruin her family, the might de’Stains, whose magic has passed from firstborn son to firstborn son for thirteen generations.

Her power could defy her vicious father, who rules like a shadow over the land of Moravia… and whose only use for his daughter is that she produce a suitable heir.

Her power could defeat his evil enchantments, free her from his grasp and rock the walls of Moravia Castle itself…

If only she can learn how to use it.

Soulstring was published by Ace Books in November 1987. It is 182 pages, priced at $2.95. The cover is by Segrelles. It has never been reprinted, and there is no digital edition. Copies in good condition are available online starting at around $1.