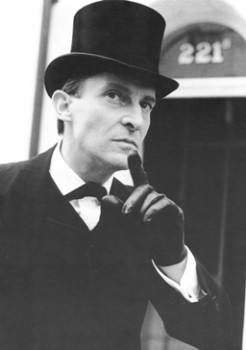 For several decades, Basil Rathbone, star of fourteen Holmes films in the thirties and forties, was generally the most recognizable and popular screen Holmes. And of course today, Benedict Cumberbatch and Robert Downey Jr are internationally recognized for their turns as the master detective.

But in between Rathbone and Cumberbatch, one actor (with apologies to Peter Cushing) stood above all other portrayers of Sherlock Holmes. And that was Jeremy Brett.

This is number one of a three part series looking at the first part (The Adventures) of the Granada television series, which ran in full from 1984 to 1994. To many fans, Brett is simply THE Holmes. So…

In 1980, Michael Cox was a producer at Granada, one of the Independent Television (ITV) contractors in England. At the same time in America, Charlton Heston was starring as Sherlock Holmes in the stage play, The Crucifer of Blood. His Watson was a handsome Englishman named Jeremy Brett.

The following year, Cox proposed an authentic Sherlock Holmes series; one that was as true to the original tales as could commercially be done in the television format. His idea was received positively, but Cox was told that an essential element of the deal would be a pre-sale agreement with American television. This would secure “up-front” money, which would be invested into the series. WGBH in Boston, host of the popular PBS series, Mystery!, was an ideal candidate for the partnership.

With approval from his superiors and a tentative business plan in place, Cox next needed to find a suitable Holmes. The name at the top of his list from the beginning was the aforementioned Jeremy Brett. Brett had enjoyed great stage success in England and America, though he had never become a major film star. He had worked for Granada before and agreed to meet Cox. Brett was interested, but cautious.

He did not want to be trapped in one part, stunting his career. The great Basil Rathbone had left more than one Holmes legacy behind! Brett was also concerned about portraying a man with such a dark character. In light of later developments regarding his mental health, this was a prudent concern.

It’s Elementary – The Falk Archive, which you can access through Tumblr and Facebook, has an almost endless collection of photos from the Granada series, like the David Burke one below. You absolutely should click over and look around. Just unbelievable!

Brett’s wife, Joan Wilson, was the Executive Producer of Mystery!. One can only speculate about her feelings regarding the whole matter, but what is known is that WGBH and Mystery! agreed to televise The Adventures of Sherlock Holmes in the US. Brett also signed on to play the great detective and Michael Cox had a new series on his hands. 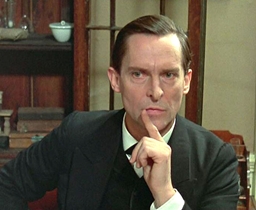 A permanent Baker Street was constructed in Manchester, England, next to another permanent stage constructed for the hit Granada series, Coronation Street.  A seven-story warehouse, which had served as storage for bonded alcohol and tobacco in the early nineteen hundreds, would be a key part of the new production. Accomplished British screenwriter John Hawkesworth was brought on board to write screenplays and serve as a script consultant. His quality work shows through in The Adventures.

American producer Sy Weintraub formed the Lorindy Company and purchased the American rights to the copyrighted tales from Dame Jean Conan Doyle. Lorindy contacted Granada, asserting that through those rights, it also held the rights to the characters of Holmes and Watson and they would sue Granada to protect their interests.

Granada disagreed and Lorindy sued, putting Granada’s production on hold. The case was argued for over two years, with an initial finding against Granada. Weintraub had planned on making over a dozen television films, starring Ian Richardson, and he was not giving up easily.

By the time the dust settled in 1983, Granada agreed to an out-of-court settlement, paying a significant sum to Weintraub and also compensating the Doyle Estate. Weintraub had made two films: The Sign of Four and The Hound of the Baskervilles. The films were shown on Home Box Office in 1983, Weintraub turned a profit on the whole affair and terminated his Holmes franchise.

Ian Richardson is an under-appreciated Holmes (as I’m sure you know because you read this, right?). He brought a pawky sense of humor to the role. Given time to grow his portrayal, it is quite possible he would have become one of the finest screen Holmes’. Richardson went on to portray Dr. Joseph Bell in the series Murder Rooms, which features a young Sir Arthur Conan Doyle as his assistant.

Granada never lost faith in the project and had continued working on the non-shooting aspects of the series during the legal interruption. One by-product of the delay was the creation of The Baker Street File. This was a guide containing over 1,200 entries related to Holmes and Watson’s habits and lives, based on the Canon. It was distributed to key workers in order to help minimize mistakes. 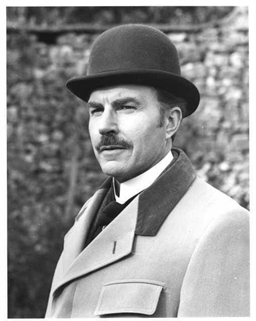 This nifty little item was later reprinted by Calabash Press and is currently available with a little legwork. Jeremy Brett had also used the delay to delve deeply into the Canon and came away with a more favorable opinion of Holmes, which he brought to the part.

Cox and Hawkesworth sorted through the thirty-six available stories and commissioned fourteen scripts. Thirteen made up The Adventures, with The Reigate Squires never being filmed. The thirteenth story was The Final Problem. The reasoning behind this approach was that if the series was not successful, it could be ended with Holmes’ death and cancelled. This is a lasting reminder that the Granada Sherlock Holmes was not a sure thing.

The last remaining piece of the puzzle was to secure a Dr. Watson.  Cox was determined to present the Watson that Doyle wrote about, not the comic relief provided by Nigel Bruce and so many who followed him. The series creator wanted David Burke, who was quite a success in British theater. Burke was quickly persuaded and completely transformed the screen image of Watson.

Cox and Hawkesworth were determined to maintain as much Canonical fidelity as possible. However, one essential change was that Watson could not be married. The series would not work if Watson did not constantly dwell at 221B Baker Street. Since Jeremy Brett emphasized the relationship between Holmes and Watson, this would prove to be critical to the success of the series.

Filming was ready to start in 1983. The third floor of the Victorian warehouse mentioned above had been converted into the marvelous 221B sitting room that is seen in the series. Cox discovered early that there would be difficulties with the building.

It was not sound proofed, and there were offices and other production-related facilities in the building. Outside noise was always a problem, and an assistant was sent outside to ride a bicycle, ringing a bell and asking for silence at certain filming times.

But shooting was finally ready to begin, over two years after Michael Cox had received initial approval from Granada higher ups. A major cast change, financial battles with Granada, Jeremy Brett’s struggles and Cox’s own departure from the project were not yet visible over the horizon. The BBC series starring first Douglas Wilmer and then Peter Cushing had not been a large commercial success. Would the first television Sherlock Holmes created to be faithful to Doyle’s stories be acceptable to critics and the public?

Next week, part two of three.

Great piece, Bob. I watched the series when it originally aired and own it now on DVD. I’ll be interested to see what you make of the casting change.

Violette – I’m debating getting the remastered DVD set. I bought a Chinese-pressed bootleg set years ago and it’s a bit muddy.

I don’t really get into the change from Burke to Hardwicke muck, since it wasn’t a high-drama situation (though it did turn out to be unnecessary…).

I enjoy both Burke and Hardwicke’s portrayals quite a bit. Much superior to the Watsons played opposite my other favorite Holmes’ (Wontner, Richardson and HOward).

Before Granada went into cost cutting mode and Brett’s health deteriorated, this was a top flight Holmes series and likely to be unsurpassed as a Victorian-set series.

I’m one of those for whom Brett is THE Holmes. I recommend the Brett biography BENDING THE WILLOW to any who are interested in his work, especially as Holmes.

For the fan of the Granada series, Michael Cox’ ‘A Study in Celluloid’ is the best book on the subject you’re likely to find.

Looking forward to your next installment, Bob. PBS is currently running the Brett series again, here in Chicago, and I’ve been tuning in every week.

Joe – PBS stations throughout the US fill up programming time with this dependable show. I’ve noticed here in Columbus they often run it while BBC Sherlock and Downton Abbey are on. Which makes sense.

I like Elementary and liked the first two seasons of Sherlock (hated three), so I don’t mind updates. But the Granada series is about as good as Holmes can get.

Back in my HolmesOnScreen website days, I wrote an essay called ‘The Definitive Holmes.’ I think I discussed Sidney Paget and Frederic Dorr Steele’s drawings, then I tagged William Gilette, Basil Rathbone and Jeremy Brett as the three defining Holmes’. Eille Norwood might be in there as well.

And I wondered what medium and who the next one would be. Updating that essay, I’d say Benedict Cumberbatch has made the list. For the record, I was enthralled with the first two seasons and hated the third.

As with A&E’s Nero Wolfe series, I have a hard time imagining a better Holmes series: at least, one set in his actual time.

I love these. I bought my first blank VHS tapes back in 84/85 to copy these off Ch 13 in NYC. I rewatched those copies for years.

In Protest of Goofball Dr. Watsons – A Poem | Almost Holmes

[…] three part look at Jeremy Brett’s Adventures of Sherlock Holmes will post over at Black Gate. Here’s part one. I posted quite a few pictures from the series over on my Facebook page over the past week or […]