Netflix’s House of Cards redefined what can be achieved by a web series. Everything about it, from casting to story to visuals, screams “quality.” The fact that it was intended to run for only a single season yet has already been renewed for a third testifies to the success that the show has had. It’s tough to maintain viewership when there’s almost nobody to root for, but they’ve done it.

But I wonder how many people realize that it is a remake of a 1990 British miniseries (apparently lust for power transcends decades. And centuries…)? Ian Richardson plays the Kevin Spacey role. Francis Urquhart has a disarming smile that makes him seem more warm than Spacey’s Frank Underwood. Don’t be fooled!

The original House of Cards has a few Holmes ties. Female lead Susannah Harker appeared opposite Charlton Heston in the TV version of Crucifer of Blood, a modified version of The Sign of the Four.

She was also the client in Jeremy Brett’s version of The Adventure of the Dying Detective. Also, Colin Jeavons was Brett’s Inspector Lestrade. But it is Richardson’s brief tenure as Sherlock Holmes that we will look at now.

Ian Richardson was an extremely successful stage actor in England, well known for his work in Shakespearean productions. He also enjoyed success on screen. Sadly, he is best known to American audiences as the man in the rolls royce who asks, “Would you have any grey poupon?” Such is fame.

Sy Weintraub, an American best known for a series of Tarzan films (you can read Ryan Harvey’s review of one here), paid a large sum of money to the Doyle Estate for rights to all sixty of the original Holmes stories by Sir Arthur. I’ve read that he was going to make anywhere between six and thirty films in the series.

Ian Richardson was cast as Holmes and two films were quickly shot: The Sign of the Four and The Hound of the Baskervilles. The Hound was being filmed when the earth opened up beneath Weintraub’s production. 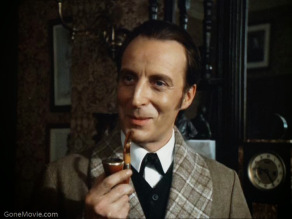 What we have here is one of the great examples of failing to do your homework. The stories were about to enter into the public domain in England in 1980. Granada Films announced a television series which would adapt all the Holmes stories and be distributed in America as well as England.

Weintraub, realizing that he had paid a lot of money for essentially nothing and was going to lose the monopoly on his American market, joined forces with Doyle’s daughter, Dame Jean, and took Granada to court.

The argument was that though many of the stories were in the public domain, because Holmes and Watson continued to feature in stories still under copyright protection, the two characters were still under copyright. Holmes copyright has remained a contentious issue right up to this day (there’s a future column).

The Granada production was put on hold for about two years (which actually let them tighten things up and prepare for filming, resulting in a stronger series). Weintraub settled the matter out of court and put his Holmes series to rest.

Richardson said that the settlement was for “an extraordinary sum of money – something like two million pounds – which was enough for Weintraub to cover his costs on both The Sign of the Four and The Hound of the Baskervilles, and make a profit, too. And so he wrapped the project up.”

A third script, The Prince of Crime, had been written by Charles Pogue, but it was consigned to limbo when Weintraub took his money and went home. It did resurface as Hands of a Murderer, starring Edward Woodward as a forgettable Holmes.

The two Richardson films debuted in the US on Home Box Office in November and December of 1983 and released directly to video the following year in the UK, airing quietly on television a few years later.

Neither made any kind of splash, in the Holmes world or out. 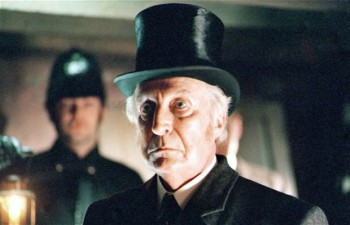 Richardson was approached about replacing the ailing Peter Cushing in The Abbot’s Cry, a planned sequel to 1984’s The Masks of Death. However, nothing came of it, the film remained unmade, and Richardson never played Holmes again.

He did, however, star in the television series, Murder Rooms: The Dark Beginnings of Sherlock Holmes. Richardson played the real-life inspiration for Holmes, Dr. Joseph Bell, with Arthur Conan Doyle as his assistant.

To Richardson’s detriment, Weintraub refused to let the actor appear in Amadeus, while the legal issues were ongoing. Thus, Jeffrey Jones was given Richardson’s role as Emperor Joseph II.

Had Granada not decided to take advantage of the copyright expiration, Richardson might have made a dozen or more Holmes movies and be remembered today as one of the finest portrayers of the great detective (he’s my favorite).

He brought a controlled humor and a playful sense of pawkiness to the role. Who knows? With the legal difficulties, Granada might have simply abandoned their project and the world would never have seen Jeremy Brett, who is regarded today by many as the greatest Holmes, at 221B Baker Street.

It had been over a decade since a Holmes television series (Peter Cushing in 1968), then two financially sound projects arrived at the same time. Curious incidents, indeed.

A future column will look at Richardson’s Hound, which is cited by many as a favorite version.

[…] number three, talking about Ian Richardson, one of the most underrated Sherlocks, is up over at Black Gate. You can sample it below and then click on the link to read it all. Richardson is in  my top five, […]

It’s an interesting point you make at the end of the column about the climate today, which obviously can support two blockbuster Holmes series (and a film franchise!) simultaneously, yet for Weintraub back then it seemed like a deal-killer.

Based on your recommendation, I want to hunt down the Richardson Holmes now!

Holmes fans enjoy identifying actors who have appeared in other Holmes movies. It’s not an uncommon ocurrence. There were several such in Richardson’s Hound of the Baskervilles:

Denholm Elliot had appeared in the two worst Sherlock Holmes films ever made. He was Stapleton in Dudley Moore’s titanic of a Hound and also appeared in John Cleese’s debacle, The Strange Case of the End of Civilization as we Know It. He finally got to appear in a real Holmes movie, playing a somewhat timid, yet effective, Dr. Mortimer.

Connie Booth, also in Strange Case, cut out the comedy as Laura Lyons. She would also appear opposite Michael Pennington’s ‘revived in the modern day’ Sherlock in The Return of Sherlock Holmes.

Four folks would go on to appear in the Grenada series. Nicholas Clay (Sir Hugo, Stapleton) starred as Dr. Percy Trevelyen in The Resident Patient, while Donald Churchill (Watson) would be Scott Eccles in Wisteria Lodge.

Ronald Lacey (Lestrade) played a creepy Thaddeus Sholto in The Sign of the Four. Finally, David Langton (Sir Charles Baskerville) would be Sir Demery in The Illustrious Client.

Nick (hmm..how do I reply within a reply?) – Yeah: back then the American market was key to making each project work financially.

The Granada series might well have not made a season one if a Boston PBS station hadn’t struck a deal to air (and pay for the privilege) the American rebroadcast. And Weintraub knew he was screwed, put up a fight and got a good settlement. He was fighting a losing battle.

But now Cumberbatch’s ‘Sherlock’ is world-wide and HUGE in China. And there’s a new series that just started in Russia, so that constraint of being “the only one” and controlling one big secondary market is a thing of the past.

The Downey Jr movie really revived a dormant franchise. Though perhaps what it really did (albeit well) was remind society that Sherlock Holmes remains an enduring, interesting character.

Holmes is too interesting to let go to waste. In a previous post you said that a short story has to last more than 10 years to be considered good. I think that is a good bar to test a story. Considering that most of Sherlock Holmes stories were short stories……that is one hell of a historic short story.

I said a short story has to last more than 10 years to be considered good? I don’t remember that. Or do you mean Nick said it?

I just found a tidbit I’d never noticed before. Richardson had been cast as Holmes in an abandoned project to translate Charles Marowitz’s Broadway play, ‘Sherlock’s Last Case,’ to the screen. Another missed opportunity.

@ Bob, my bad, it was John O’Neil who said that, and I agree with him. I wasn’t finished with my coffee when I made that post.

@Wild Ape – I never get a near a keyboard before coffee. Or a car, or the front door….

Weintraub has 10 credits on imdb as a producer: 8 Tarzan and 2 Sherlock Holmes. He held the rights to Tarzan for about 25 years and made a bundle of money out of residuals. An interesting Hollywood career.

[…] mentioned Netflix’ wildly successful House of Cards in a recent Public Life of Sherlock Holmes posting. I’ve written a couple of screenplays that will be made into movies shortly before […]

[…] as the great detective. You can argue which is better: Cushing’s Hound or Rathbone’s (Ian Richardson’s version might be number three, but I prefer his Sign of the Four). It may simply come down to a preference […]

[…] The Case of the Short Lived Sherlock – One of my favorite Holmes’, Ian Richardson […]

[…] Cumberbatch’s Holmes being more of a parody than a true depiction. I can watch Rathbone, Richardson, Cushing, Wilmer, Wontner and of course, Brett, and see Doyle’s detective. But a deep look at […]

[…] Hillerman would play the real Watson a few years later opposite Edward Woodward’s Holmes in The Hands of a Murderer. That forgettable film was based on the script for The Prince of Crime, which was to be the third Ian Richardson Holmes film, before Sy Weintraub settled his lawsuit against Granada and packed up his project after two movies. (Richardson is just about my favorite Holmes). […]