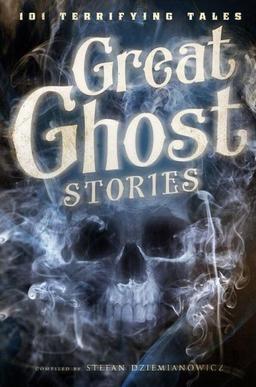 Fall River Press is Barnes & Noble’s discount hardcover publisher. If you’ve ever visited a B&N superstore, you’ve likely seen dozens of their books piled near the check-out aisles. They specialize in low-cost editions of authors in the public domain, including Edgar Rice Burroughs, H.G. Wells, Edgar Allen Poe, Washington Irving, and many others. They’re notable chiefly because their books are a great value, and also because you can’t find them on Amazon.com.

Stefan Dziemianowicz has edited more than 50 horror, mystery, and SF anthologies, many for Fall River — including The Rivals of Sherlock Holmes: A Collection of Victorian Detective Tales, and Penny Dreadfuls: Sensational Tales of Terror. His latest is Great Ghost Stories: 101 Terrifying Tales, a nearly 700-page compilation of stories by Lovecraft, M.R. James, E.F. Benson, Jules Verne, Somerset Maugham, Rudyard Kipling, and 95 others.

Ghosts! They come in all shapes and sizes, all genders and species, and they have manifold reasons for manifesting — or, as is sometimes the case, not manifesting. For more than two centuries ghosts have haunted the imaginations of writers around the world, who have chronicled their exploits with a vividness and zeal that is just a little bit incongruous for entities whose relative lack of material substance leads many among us to question their existence.

Great Ghost Stories pays tribute to the long literary legacy of the ghost story by gathering together in one volume 101 of the best short ghost stories of all time. Here you will find ghosts of virtually every stripe and semblance: ghosts who seek revenge against the living, ghosts who dutifully keep appointments made while their hosts were still alive, ghosts who appear to convince skeptics of their existence, and even ghosts who don’t know that they’re ghosts. Some of the ghosts depicted here are helpful, while others are horrifyingly malevolent. Some have a disconcerting physicality — for example, the phantom limb whose owner claims committed the murder that he’s accused of. Others are so insubstantial — among them the lingering influence of a suicide that imbues a boarding house room — that their power over the living seems completely out of proportion.

The stories collected in this volume show the great variety of ghostly experience as conceived by some of the greatest weird fiction writers of all time. You don’t have to believe in ghosts to enjoy these stories–but you dismiss their power to terrify you at your own peril.

Great Ghost Stories: 101 Terrifying Tales was published by Fall River Press on March 18, 2016. It is 689 pages, priced at $7.98 in hardcover — less than the price of a paperback! The jacket was created by The Book Designers. It’s available at your local B&N store, and online at B&N.com.