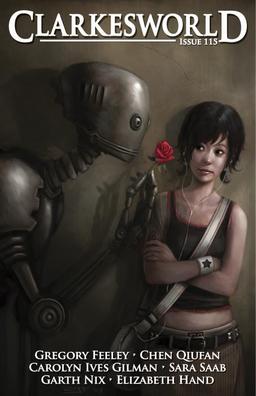 Tangent Online is, as usual, more on top of things than I am. Their review of the latest issue of Clarkesworld magazine was posted yesterday, before I’d even had a chance to look at this month’s cover. Reviewer Jason McGregor does a fine job of writing intriguing summaries for each story (a subtle art, and I know that from experience.) Here’s his summary of “Touring with the Alien” by Carolyn Ives Gilman.

Avery is a woman with something in her past which leads her to a strange and rootless life, so she is able to go on a journey at a moment’s notice when an employer calls her with a strange job. Alien artifacts have appeared all over North America (why just North America?) and humans who may be abductees eventually appear from them. Avery is to drive one of these, and an alien, to St. Louis. Along the way, she reflects on her life (ultimately revealing the great tragedy of her life, which the reader suspected in a general way), her strange companions, the nature of consciousness, and makes a decision with enormous consequences.

“Touring with the Alien” by Carolyn Ives Gilman
“Balin” by Chen Qiufan; translated by Ken Liu
“The Bridge of Dreams” by Gregory Feeley
“The Cedar Grid” by Sara Saab
“Old Friends” by Garth Nix (from Dreaming Again, 2008)
“Winter’s Wife” by Elizabeth Hand (from Wizards: Magical Tales From the Masters of Modern Fantasy, 2007)

Clarkesworld typically posts several Podcasts during the month. This month there are six:

We last covered Clarkesworld with Issue 114.

This issue’s cover, “Robot in Love,” is by Rudy Faber.

Our April Magazine Rack is here. See all of our recent fantasy magazine coverage here.

I’d far rather be that fictional name-doppelganger than the one in this litfic novel about a suburban housewife having a nervous breakdown during the Cuban missile crisis. All my Google alerts were really confused when that book came out. Bring on the alien-artifact-smuggling jobs!

Now you have me very curious about A Place We Knew Well. Like I needed that! 🙂

It has no monsters, no ghosts, no magic, no cosmogonic mysteries. I checked.

Better you than me, I guess.