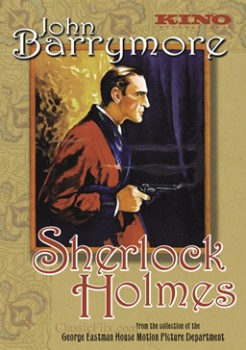 Back in May, I wrote about Eille Norwood’s turn as the silent film era’s finest Holmes. Now, just about any discussion concerning who the greatest actor of the silent era was will involve the name John Barrymore, who was known as “The Great Profile.”

So, it’s natural that he would make a film about a character that over a hundred years after his creation can still be readily identified by his profile.

By 1922, John Barrymore was an established star in both the US and Great Britain and had made a hugely successful version of Dr. Jekyll and Mr. Hyde just two years before. Actor/director Albert Parker was determined to make a Holmes film with the forty year-old Barrymore in the lead role.

Of course, there was a minor snag, as Stoll Pictures (starring Norwood) had locked up the rights to Doyle’s original stories, with Sir Arthur’s own assistance. So Parker had an actor and an idea, but no script. The man was certainly energetic, and he rushed to Chicago and met with the great William Gillette, who was touring with his own play, Sherlock Holmes (subject of a future post).

Parker bought the rights to film the play (which had already been done in 1916 starring Gillette himself: sadly, no known print exists of that one) and arranged a deal with Samuel Goldwyn. This would easily be the most lavish and well-financed Holmes film to date. 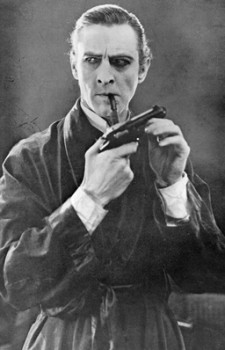 Many of the exterior scenes were filmed in London, while shooting also took place in Switzerland. The title would be changed to Moriarty for its release in Britain. It is a reasonable assumption that this was to minimize conflict with the Stoll series with Eille Norwood.

Barrymore was immensely popular and his name guaranteed that the movie would receive a great deal of attention. Parker’s amusing comments on working with Barrymore are worth quoting at length:

“I came over to England after Barrymore had arrived and I was told that Barrymore couldn’t be seen or found anywhere. I finally tracked him down to a tiny little attic room at the Ritz Hotel and I went in and there was Barrymore sitting up in bed blind drunk. The room was in a terrible state. There were even gin bottles in his shoes!

Eventually I got him to work ,and I can tell you I had a pretty rough time with him on location in England. We had rows; it was a very tricky time. We went to Switzerland on location; more rows…Barrymore was drunk most of the time.

We returned to the States when we had all the location shots, and then I really had it out with Barrymore; a real row. I told him he was killing himself and so forth. I really let him have it. And Barrymore must have seen the strength of what I was saying, and you know, he never touched a drop while we were filming all the interior scenes…I think he gave a very good, restrained performance in those scenes.

The film got marvelous reviews, you know. It broke records in New York. It was my favorite picture that I made. After that film Jack and I became great friends. I was very fond of him, and I think he was fond of me. But he was absolutely crazy, mad as a hatter, not food for himself at any time, but lovable.” 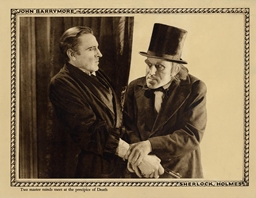 The rest of the cast was top notch as well. A newcomer, Roland Young, played Dr. Watson. In his typical overstating fashion, Barrymore said of him:

“When the modest, self-effacing Roland appeared on my horizon, I took a great liking to him; so much so that I began to feel sorry for him during our scenes together. For once in my life, I decided to be somewhat decent towards a colleague. I suggested a little stage business now and then, so that such a charming, agreeable thespian might not be altogether lost in the shuffle. When I saw the completed film, I was flabbergasted, stunned and almost became an atheist on the spot. That quiet, agreeable bastard had stolen, not one, but every damned scene!

This consummate artist and myself have been close friends for years, but I wouldn’t think of trusting him on any stage. He is such a splendid gentleman in real life, but what a cunning, larcenous demon when on the boards!”

The terms “quiet” and “unassuming” were never used when talking about Barrymore himself.

Moriarty was played by a German silent film star of the time, Gustav von Seyfferitz. He was a parody of a villain, with sideburns, long hair and a stovepipe hat. There was certainly no doubt that you knew he was evil as soon as he appeared on the screen. 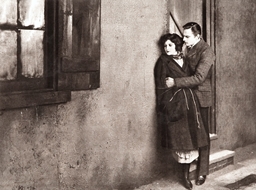 At the end of the film, Barrymore confronts the evil professor while disguised as..Moriarty! It is a scene never again seen on film.

Carol Dempster was cast as Holmes’s love interest. Parker said that Barrymore objected to Dempster. They were down to shooting the last scene when Barrymore refused to do it with Dempster and left. Parker was stuck.

Barrymore was to run and jump on a cab, talking to Dempster who was inside. Parker sent Dempster home to get the actor to agree to film the scene. But Parker put Dempster’s maid in the cab. Apparently Barrymore was surprised at this and ad-libbed the scene, which stayed in the final version.

William Powell played a thief. He would later portray popular detective Philo Vance and then achieve Hollywood fame as Dashiell Hammett’s thin man, Nick Charles. All of the co-stars were short, as Barrymore was not tall, and Parker was careful not to have Holmes appear less than the lean, towering figure Doyle painted.

The plot followed the Gillette play fairly well, with two notable exceptions. The lesser one came about because Parker wanted to include an attractive houseboat in the film. Since it had nothing to do with the original story, a subplot was added in which Holmes investigated a murder that was new to the movie.

A prologue was added at the beginning of the film that attempted to explain Holmes’s obsession with Moriarty. Holmes and Watson are colleagues at Cambridge, where Prince Alexis is falsely accused of stealing athletic funds. Moriarty is behind the frame-up. Holmes is nearly run over by a cart driven by the lovely Alice Faulkner and she turns his head.

But he focuses his attention on the crime and discovers that Moriarty is at the heart of it. Holmes confronts him and realizes how truly wicked the man is. He dedicates his life to bringing him to justice. My guess is this was added for those who weren’t familiar with Doyle’s The Final Problem. 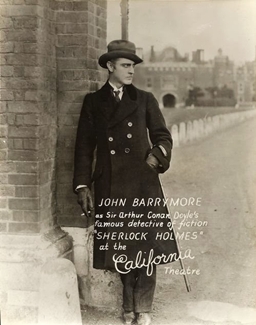 From there, the story of the stage play starts, with Faulkner, compromising letters and the evil Larabees all woven together. Holmes traps Moriarty at the end and marries Miss Faulkner.

Reviews were generally favorable and the film was a hit in America. The Toledo Blade said: “Sherlock Holmes could have had no more enthusiastic or sympathetic interpreter. It is a remarkable picture.”

This film was lost to the world until 1975. In fact, the movie itself did not even exist. Parker had hundreds of rolls of negatives in his personal collection. Almost every take of the movie was there, but they were not in order and there were few frame titles for guidance.

Parker could remember very little of the order and died while the reconstruction was going on. He was working with British film historian Kevin Brownlow, who doggedly rebuilt the picture scene by scene. To watch the film and imagine the work Brownlow did makes this author tip his deerstalker to him. It was a remarkable accomplishment and certainly added to our film history of the great detective. You can read about it here

IT’S ELEMENTARY – Barrymore was born into an acting family and with his siblings Lionel and Ethel, was part of America’s acting royalty. His grand daughter is Drew Barrymore.

[…] I recently wrote about John Barrymore’s film, Sherlock Holmes, which was based on William Gillette’s massively popular play about the great detective. […]