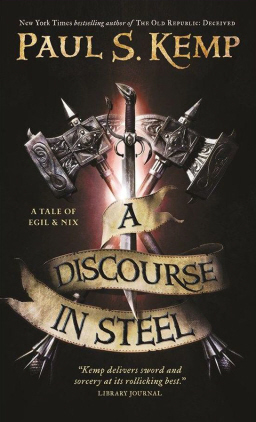 There’s a school of thought in cover design that says that book covers with a heavy design element — as opposed to a reliance on artwork — are taken more seriously.

There’s something to this. A lot of bestsellers eschew artwork altogether in favor of design, and it seems to work just fine. When George R.R. Martin’s A Game of Thrones became a bestseller, Bantam Spectra jettisoned the artwork by Stephen Youll that had been on the cover for nearly ten years, and replaced it with the boring cover you’re familiar with today. No artwork, just a shining sword. Most mainstream readers won’t buy a book that looks too much like a fantasy novel — or at least, that’s the theory.

That was the first thing I thought of when I saw the cover of Paul S. Kemp’s  A Discourse in Steel, the second novel in his Tales of Egil & Nix series. It’s a sharp cover, actually, with a clear adventure fantasy theme. The lack of artwork and focus on design brought A Game of Thrones to mind (maybe it’s supposed to). But I also found it a little generic.

Egil and Nix have retired, as they always said they would. No, really – they have! No more sword and hammer-play for them!

But when two recent acquaintances come calling for help, our hapless heroes find themselves up against the might of the entire Thieves Guild.

And when kidnapping the leader of the most powerful guild in the land seems like the best course of action, you know you’re in over your head…

A hugely-enjoyable stand-alone adventure in classic sword and sorcery mode, from the New York Times bestselling author of Star Wars: Deceived and The Hammer and the Blade.

The first book in the series was the well-received The Hammer and the Blade (2012) — still available, with an entirely more typical fantasy cover.

One thing that impressed me was the recommendations on the back. These appear on most Angry Robot paperbacks, and this one read:

IF YOU LIKE THIS TRY:
Fritz Leiber – The Lankhmar Stories
Douglas Hulick — Among Thieves

It wasn’t the comparison to Fritz Leiber that impressed me. As I’ve noted before, every modern sword and sorcery novel wants to be compared to Fritz Leiber. No, what impressed me was that they recommended Douglas Hulick’s Among Thieves, a Roc paperback. Good to see a little genuine camaraderie between fantasy imprints.

I’ve been telling myself to pick up the first book in this series for the past year.

I’ve read several of Kemp’s Forgotten Realms novels and i enjoyed them quite a bit, but it seems like the Realms setting has held him back in some ways. I’d like to see what he does in his own sandbox.

Kemp’s done quite a few FR novels — we briefly discussed his contribution to the 6-part WAR OF THE SPIDER QUEEN series, Resurrection, two years ago:

If I remember correctly, you said you enjoyed those books quite a bit.

Kemp’s also penned several STAR WARS novels, including the upcoming Lords of the Sith (due next April.)

And I’m with you — I’m curious to see what’s he capable of, striking out on his own.

I really enjoyed the first novel. ‘A Discourse in Steel’ is already purchased and waiting on my bookshelf. I want to get to it soonish.

Ressurection was a decent book that was overshadowed by the first two books in the series.

His best Forgotten Realms work is a series about a character called Erevis Cale. Right now there are 8 books and four short in the series. i’ve read 4 of the books and three of the short stories.

I’ve enjoyed them all more than Ressurection. One of the trilogies ending kind of breaks the mold of your normal DnD plot.

Let’s be honest. Most book covers today are terrible, so less could be seen as more in a lot of cases. 😀

And John, if you think the current cover to Game of Thrones is bad, you should see the original hardback cover.