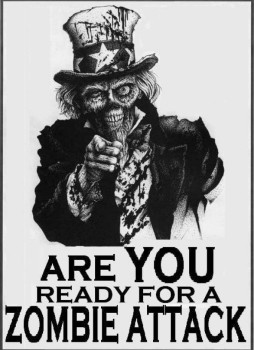 First there was the much-ballyhooed U.S. Strategic Command document discovered earlier this year outlining a plan of action in case of a zombie apocalypse (read the CNN report HERE). Then the Centers for Disease Control and Prevention capitalized on the zombie zeitgeist with their campaign for zombie outbreak preparedness (HERE). Even researchers from the Mayo Clinic, the top-ranked hospital in the United States, have participated in “Bounce Day,” which describes itself as “an integrated disaster response experience” that simulates a zombie plague (HERE).

Such stories are noteworthy and amusing, especially to a horror maven such as myself, but perhaps they aren’t as surprising as some folks may first think. Really, they make perfect sense.

Protocols for dealing with a zombie outbreak are pretty similar to those for virtually any pandemic (minus gunshots to the head). As the Bounce Day blog notes, using “actors simulating illness (zombies) and those affected by the crumbling of society” in such training scenarios helps “participants [learn] both medical and nonmedical response protocols ranging from vaccination and treatment to refugee camp management and security.” In other words, even though zombies don’t exist, the skills we would need to utilize in order to contain them are highly practical for many real-world threats (avian flu, Ebola — take your pick of scary viruses that keep World Health Organization officials up at night).

Zombies provide a fill-in-the-blank marker for such quarantine situations — a growling, rot-faced placeholder for any number of nightmare scenarios. Ironically, by giving such hypothetical scenarios the zombie veneer, you make them less scary. Practicing for a bird-flu pandemic is kind of depressing, and really kind of terrifying. Zombies are fun because they don’t exist. Hence we have an illustration of how monsters are often used to sublimate real fears under the guise of stand-in bogeymen. We can deal with our real fears at one level removed, without having to cogitate on them directly.

And as an added bonus: in the unlikely event the dead do start rising again with a hunger for human flesh — hey, we’ll be prepared for that too.

I remember the humor and cleverness of the CDC zombie page when I first discovered it about three years ago. At the time it made sense, the needed preparedness for any sort of disaster have similarities.

But on a second perusal of that page, I’m not seeing how these suggestions would be all that incredibly helpful in the zombie apocalypse.

Nevertheless, whatever tangential connections can be made in the hopes of helping people to be better prepared for real disasters, more power to them!

One suggestion that would be most helpful in a zombie apocalypse but will certainly be absent from CDC is plenty of extra ammunition.