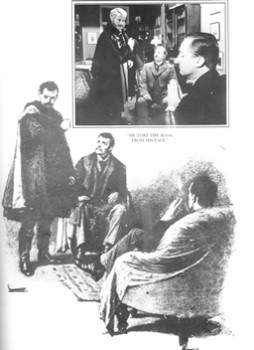 Last week I posted part one of our look at Granada’s The Adventures of Sherlock Holmes, starring Jeremy Brett.

The Adventures were divided into two parts; seven episodes in the first; six in the latter. A Scandal in Bohemia aired on April 24, 1984. Can it be thirty-one years since Jeremy Brett first graced television sets as the great detective? Scandal was actually the third story to be filmed.

Producer Michael Cox wanted Brett and his Watson, David Burke, to become comfortable with their roles before filming one of the most famous tales in the Canon, so he didn’t start taping with this one.

Watson enters their Baker Street lodgings, having been gone on a trip. He sees the empty syringe case and fears his flat mate has turned to cocaine. Shortly after our first vision of Holmes, Brett gives the “My mind rebels at stagnation” speech. It is completely understated but still paints a portrait of Holmes’ need for work (compare it to the over-the-top reading of Matthew Frewer).

The script is remarkably faithful to the story and is filled with original dialogue from Doyle. The influence of Sidney Paget is blatantly obvious. The King of Bohemia’s unmasking is a replica of the original drawing, and Brett’s ‘drunken groom’ disguise is nearly identical to Paget’s drawing. We even get the famous “Good Night Mr. Holmes” scene.

David Burke is as far from Nigel Bruce as one can imagine. He is thoughtful, intelligent, amusing without being a buffoon and utterly dependable. There is a valid film reason for Bruce’s un-Canonical portrayal as comic relief, but Burke reinvents Watson as his original self: the way Doyle wrote him.

Producer Michael Cox intentionally wrote Watson into scenes he was absent from in the stories and inserted him actively into conversations. This gave the David Burke more solid footing to work from and diminished the need to play the role for laughs, such as Nigel Bruce did. It worked wonderfully!

It’s Elementary – The bonded warehouse that served as the studio was not soundproofed. In fact, due to the construction all around the site, the second assistant would ride his bicycle around the area, ringing a bell and asking for silence. Seriously!

Critics were kind and viewer numbers would be good (though not great) for The Adventures. The following week, The Dancing Men aired. Brett was left-handed but was determined to portray Holmes as a right-handed man. The scenes where he writes the dancing men alphabet on the chalkboard were laborious efforts on his part.

Brett felt that he and Burke were really developing the friendship of Holmes and Watson and it comes through in this episode. Since Brett had played Watson on stage in Crucifer of Blood, he felt he understood both sides of the relationship. 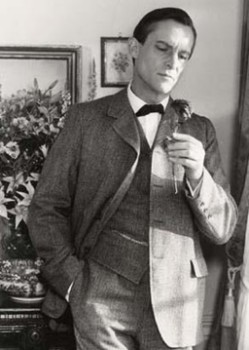 The series continued with The Naval Treaty, The Solitary Cyclist (the first filmed), The Crooked Man, The Speckled Band and The Blue Carbuncle (a Christmas episode which aired on June 5, 1984!).

Jeremy Brett was determined to be as faithful to Doyle as he could be. This led to many arguments with Producer Cox and script editor John Hawkesworth, who gave more weight to the practical realities of a television production than Brett did. But there are many instances of canonical fidelity.

The famous “Rose” soliloquy from The Naval Treaty is done by Brett and again, there is a strong similarity to Paget’s drawing. The famous image of Holmes lashing at the deadly speckled band coming down the bell rope was lovingly recreated. And throughout each episode, direct quotes were lifted from Doyle’s writings.

One element characteristic to the seven episodes was that they all opened with an action sequence of some type. Narration of a domestic scene at Baker Street reads well, but does not produce compelling television. For Scandal, we see one of the attempts to burgle Irene Adler’s house to open the episode.

The King of Bohemia had told Holmes of such attempts. Cox and company use the medium of television to restructure and expand the original story without being unfaithful to Doyle.

The Solitary Cyclist opens with Violet Smith being pursued by the title character on her way to consult with Holmes at Baker Street. The viewer is given a sense of something afoot before Holmes enters the case. It is a television technique that works for the Holmes tales.

Brett was still learning Holmes during these first seven episodes. He both expanded and “shrank” the character. An unexplainable twist was giving Holmes a palpable contempt for the military at the beginning of The Crooked Man. One feels sympathy for Major Murphy, Col. Barclay’s aide. 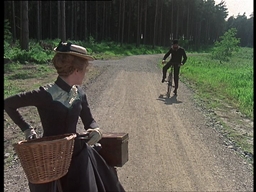 We see Holmes’ despair at not being able to crack the dancing men alphabet as his physical appearance declines (repeated in The Norwood Builder). But there are other scenes in which he seems to be the Holmes we have imagined for so long.

His coolness in the face of Grimesby Roylott’s rage is perfect. And his disdain for the King of Bohemia is summed up when he refuses to shake his hand, leaving Watson to quickly cover up.

Oddly enough, the next set of adventures did not begin airing until August 25, 1985 (The Blue Carbuncle was televised on June 5, 1984). However, all thirteen episodes had been filmed one after another, with no break. Only one week of preparation was given before shooting began for each episode.

Brett, feeling the strain on himself and sensing the effect on the crew, lobbied for a two-week preparation period, which Granada denied.

It’s Elementary – The team had forty stories to choose from: those in the public domain. Four stories were dropped from consideration (two lacked Watson, while two others had him doing nothing), though one, The Musgrave Ritual, was eventually used.

The first installment can be judged a success both commercially and critically. Brett’s portrayal was well received and David Burke was reinventing Dr. Watson. Granada’s production values were strong and the Victorian world of Holmes and Watson had been credibly recreated.

On tap for the second part of The Adventures were episodes including Inspector Lestrade, Mycroft Holmes and Professor Moriarty. Rosalie Williams, who had known Brett during his early days on the stage, had committed to the series for the duration and continued as Mrs. Hudson.

Along with The Sign of the Four, The Adventures were the high water mark of the series: heady stuff, indeed!

And here are links to:

When the Granada series came out, there hadn’t been a really well-received and liked Holmes series since the Peter Cushing BBC show in the mid-sixties.

There had been popular movies like The Private Life of Sherlock Holmes and Hammer’s Hound of the Baskervilles. But essentially, all Holmes attempts compared unfavorably with the Basil Rathbone movies of the forties.

Brett’s Holmes was the first interpretation to be considered at least the equal of Rathbone’s’.

Before the recent explosion of Cumber-mania, Rathbone and Brett have usually been considered the two greatest on screen Holmes’.

There have been other favorites, like Ian Richardson, Cushing and Eille Norwood (silent films), but really, it’s been Rathbone and Brett and everybody else.

That’s the huge impact that Brett’s series had. It gave us a classic Holmes, using Doyle’s actual setting: Victorian London.

“The Blue Carbuncle” is a delicious Christmas season watch. It also encapsulates, in a lighter mode than most episodes roll, everything that made these Jeremy Brett Sherlocks the very best Sherlock ever.

I just re-watched The Greek Interpreter. Don’t know if it’s my favorite, but I thought they did a great job reworking the finale (which is better for tv than the original story is).

And they had George Costigan intentionally play Latimer in an oily, slimy manner. It’s the BEST Peter Lorre imitation I’ve ever seen. Superb.

Along with Mycroft, that makes it one of my favorites in the series.

A thoughtful essay. I must say that I agree that Jeremy Brett presents an unparalleled portrait of Holmes, especially in these early episodes, aided by Granada’s wonderful sets.
I just wanted to correct one thing – Brett was left-handed all right, but it’s not him drawing the dancing men so awkwardly right-handed on the chalkboard. They used a hand double for those scenes. I suppose the awkwardness comes from them trying to conceal the person the hand was attached to.
Much later in The Problem of Thor Bridge, Brett (who was an avid archer) shoots the bow left handed – I supposed they figured no one would notice, or perhaps by then production values has slipped to the point that they didn’t care.

I did not know they used a hand double. I was relying on Michael Cox’s ‘A Study in Celluloid.’

Something about using a hand double amuses me. Of course, I’m a bit odd.