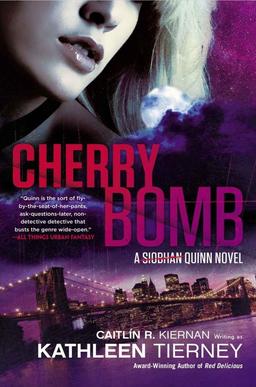 Caitlin R. Kiernan has received a lot of attention for her recent horror novels, especially The Red Tree (2009) and The Drowning Girl (2012). Her Siobhan Quinn urban fantasy novels had an unusual genesis, as she explains in the Author’s Note to this volume:

My thanks to my agent, Merrilee Heifetz, who urged me to do this after reading Chapter One of Blood Oranges, which I’d actually written on a lark, as a joke, a protest against what “paranormal romance” has done to the once respectable genre of urban fantasy. I honestly never intended to write a whole Quinn book, much less three.

Cherry Bomb is the third (and final?) volume in the series, following Blood Oranges (2013) and Red Delicious (2014). All three were published under Caitlin R. Kiernan’s pseudonym, Kathleen Tierney.

Here’s the back cover copy.

Meet Siobhan Quinn — Half vampire, half werewolf, and retired monster hunter. Or so she thought…

Three years have passed since Quinn turned her back on Providence, Rhode Island’s seedy supernatural underbelly, walking out on Mr. B. and taking a bus headed anywhere. She hoped her escape would give her some peace from the endless parade of horrors. But a dead girl who quarrels with the moon can’t catch a break, and, on the streets of Manhattan, Quinn finds herself caught between a rock and a hard place. Again.

What do you do when you’re stuck in the middle of a three-million-year-old grudge match between the ghouls and the djinn, accidentally in possession of a hellish artifact that could turn the tide of the war, all the while being hunted by depraved half-ghoul twins intent on taking the object and ushering in a terrifying Dark Age?

Cherry Bomb will be published tomorrow by Roc Books. It is 257 pages, priced at $16 in trade paperback and $9.99 for the digital edition.