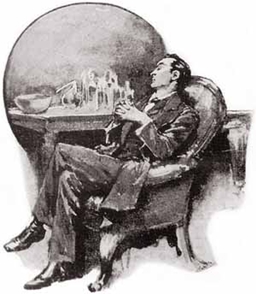 I opened the door to our rooms at 221 B Baker Street and entered, careful not to jostle the package I carried. I was immediately engulfed in the warmth of the crackling fire that blazed in our hearth. Sherlock Holmes  was in his favorite chair, looking half asleep. Opening his eyes, he turned his head and greeted me lazily.

“Ah, Watson, you have finished your rounds and holiday shopping and returned too late for Mrs. Hudson’s evening repast. However, I am sure she can be prevailed upon to provide you with some cold meats.”

Here, he stopped, and before I could reply, changed his tack entirely. “But I see that you stopped at your club, where I am sure you supped.”

You can imagine my astonishment, dear reader, to hear this. I had not uttered a word since entering the room, and I saw no way that he could know that I had indeed dined at the club. I was surprised that he hadn’t given the name of the former army colleague who had joined me.

“Holmes, this is outrageous! How could you possibly have deduced that in the few seconds I have been in this room?”

He airily waved a hand of dismissal. “Please, it is obvious.” The look on my face must have shown I was not convinced, so he continued.” Your boots have that dark sheen that is unique to the elderly boot man at your establishment. There are at least three other distinctive marks that tell me as much, but the boots alone were enough to deduce it. It is the merest child’s play. Pray, remove your coat, light your pipe and make yourself comfortable.”

I shook my head and chortled. My friend never ceased to amaze me with his elementary, but surprising deductions. I filled my clay pipe with a fresh supply that Bradley’s had sent up just yesterday. Once it was properly alight, I looked at the world’s greatest consulting detective. Noticing my scrutiny, he reached behind his chair and set a package out on the table.

“This is a gift for you Watson. What is it?”

“That’s hardly fair,” I retorted. “How could I know what is in that wrapped package.”

He merely smiled, and his eyes glowed with that wry amusement I saw so often. “You know my methods, apply them.”

I leaned forward and closely examined the wrapping paper, which was of good quality. It was blue, with silver trim. There was no bow or the like. I picked it up. Nothing shifted inside, and I mentally noted that it was not very heavy. No more than two pounds, if that. I peered at it thoughtfully, waiting for my subconscious to offer me some insight. 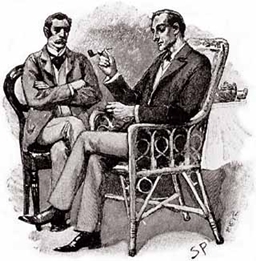 Finally, I set it back down on the table. Leaning back in my chair, I said as casually as I could “It is a quill and ink set. I imagine with a high quality nib. It was probably purchased at Robertson’s”

For perhaps the first time, I had left Sherlock Holmes speechless. He looked at me, unable to speak a word. I had roomed with Holmes for several years now, and I was savoring this moment.

He finally gained his composure, though his face still showed surprise. “Watson, I hardly know what to say. You left this morning before I purchased this item, and you have only just returned. I would have noticed you had you been present when I bought it. Your answer must have been a guess.”

How many times had our situation been reversed? With a smug look, I said, “Holmes, I never guess. It is destructive to the faculties.”

Chagrined, he replied “Touché, Watson, a most palpable hit. I would be most pleased to hear how you came up with the correct answer. I am your student.”

I cannot tell you how much I was enjoying this. It was a rare moment, indeed, when I had the upper hand on Sherlock Holmes in the area of deduction. Just as he had done so often in the past, I set out explaining my “trick.” I sat up straight and took on a, dare I say, professorial air.

“Last night, as we relaxed after supper, I awoke from a short nap to notice you looking at my writing desk. I was curious and observed you from beneath lowered brows. You shook your head with a small smile, and I knew you were thinking that I have worn my current quill to the point of obsolescence. This has been one of my favorites.”

He nodded his agreement; still not certain how I had reached my final answer. I continued. “You then leaned back in a contemplative mood, perhaps wondering if replacing it would be too personal. Even though you constantly belittle my writings as “sensationalistic,” you know that I take them very seriously, and a writer’s tools are very important to him.”

Here I paused for effect and took a few puffs on my pipe. My friend had a strange grin on his face, though it was not a large one. I knew this was because he realized that I had finally learned his methods.

“This was not actually a real risk, since you know what implements I prefer. So, you decided to give me something thoughtful and practical.”

“Very good Watson, but how can you tell it is of high quality?”

“That is the easiest question, Holmes. Do you think I would expect you to give such a gift, but of inferior craftsmanship? At Christmas?”

He merely nodded at this, for it really wasn’t much of a deduction. “And you knew it was purchased at Robertson’s. How?”

“Here, I had some additional information. As you know, it is a capital mistake to theorize before one has all of the facts at hand.” He let out a chuckle, hearing his own maxim tossed back at him, and motioned for me to continue.

“I myself was in Robertson’s earlier this week, looking for a blotter. I couldn’t help but notice the wrapping paper being used for holiday purchases. It was the same paper I see before me.”

With that, I put my hands behind my head and looked at my companion.

“Bravo Watson, bravo,” he said, clapping his hands together. I will admit that my smile widened, for such praise from Holmes was rare. “You have correctly identified the contents of the package. But that is not the most amazing thing.” I gave him a curious look. “No, what truly stands out is that you did correctly identify it, even though every deduction you made was incorrect.”

The smile faded from my face instantly. I sat forward, sputtering incoherently.

“No Watson, that is untrue. You were correct in stating that I would not give you an inferior gift. I thank you for the compliment. However, your other statements are all wrong.” 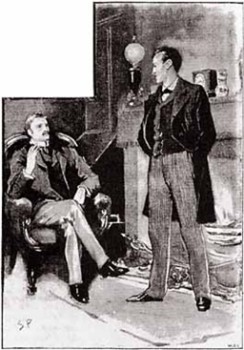 Now it was my turn to be at a loss. I still had not managed to put together a complete sentence.

Holmes tamped his pipe and sat back, then continued on in a smooth voice. “You did in fact catch me looking at your writing table last night. However, while I was certainly aware of the quill on it, I did not take any real notice of it. I was, instead, looking at the table itself. It seemed to me that, by sitting there, you would catch a chill breeze when the fire was not lit. I then sat back in my chair and determined that you would likely be more comfortable if you moved the table to that spot.”

Here, he pointed to an open space about six feet to the left. “At that point, I gave it no more thought, as it is your business where you want your writing table. I would add that I purchased the quill and bottle at Stamford’s. You are aware that the world’s leading mapmakers have a fine selection of writing utensils. The wrapping paper is common, and I suspect many of the city’s cartographers and the like use it.”

Any elation I had felt just a few moments ago was completely gone. I was now capable of speaking, but I had nothing to say. He was not done with me, however.

“So now, Watson, you must tell me how you knew what was in the package. Was it not a guess?”

A sheepish grin crossed my face. “No Holmes, it was not a guess. Yesterday, I heard you talking in the hallway with Mrs. Hudson about the purchase.  I was in my room.”

“Capital, Watson!” Holmes said with a grin. You had an outcome, so you looked at the facts in a way that led you to your result. I dare say you could join Lestrade at Scotland Yard.”

Seeing a hurt look on my face, he relented. “Come now, it’s not as bad as all that. You attempted to use my process of reasoning. That’s more than the Yard does. And the gift is yours. Should you need help moving the table, I am at your disposal. As for me, I shall retire.”

With that, arose and went to his room. As he closed the door, I heard him say “Merry Christmas to you, and to you a good night.”

Laughing to myself at my attempt to outsmart the great detective, I placed my present on the mantle above the fire and retired to my own room upstairs.

IT’S ELEMENTARY – The three illustrations are by Sidney Paget. If you’re not familiar with Paget, he’ll be a future post topic, but you can read about him in the last issue of Baker Street Essays, which featured illustrators of the Canon.

THE STORY BEHIND THE STORY

Three years before Sir Arthur Conan Doyle died, he received an interesting request.  A dollhouse designed for Queen Mary of England was on display in London. It was exquisite in detail and included a small library with rows of books. The top authors in England wrote new short, short, short stories, which were painstakingly inscribed onto the books. One was by Doyle. It was a brief parody called “How Watson Learned the Trick.”

It is a relatively unknown piece of Holmesian fiction, involving Watson using Holmes’s methods and botching it quite nicely. You can watch an animated film short of it here.

“Watson’s Christmas Trick” is my own holiday tribute to that mini book by Sir Arthur Conan Doyle.

Bob, it’s a wonderful little mini-mystery that stays faithful to both characters. Thanks for so many brilliant articles on the Great Detective over the past year. Merry Christmas.

Thanks Michael. It’s been a fun first year here on Black Gate. There will be more Holmes (and other subjects) in 2015.

Merry Christmas to you and the rest of Black Gate. Along with Easter, it’s the day that keeps me going through the year.

[…] week over at Black Gate, The Public Life of Sherlock Holmes contains my own short Holmes pastiche, Watson’s Christmas Trick. Which is a take on Doyle’s own Holmes pastiche, How Watson Learned the […]