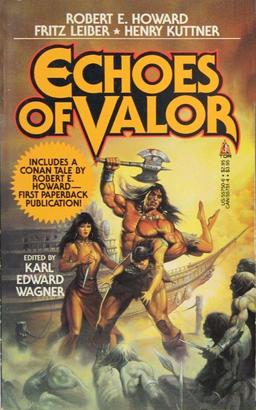 In 1987, a decade after he’d edited the three volume definitive editions of the Berkley Conan (The People of the Black Circle, Red Nails, and The Hour of the Dragon), Karl Edward Wagner set out to create a major reprint anthology of heroic fantasy.

He succeeded with flying colors with Echoes of Valor, the first volume of which was published in 1987. This volume is unusual for several reasons. First, it contained only three stories — three complete novellas by Robert E. Howard, Fritz Leiber, and Henry Kuttner, wrapped in a rather terrible cover by Ken Kelly.

Second, it includes the first publication of the original version of Howard’s 100-page Conan story “The Black Stranger.”  Unsold in Howard’s lifetime, it had previously appeared — heavily revised by L. Sprague de Camp — in the February 1953 issue of Fantasy Magazine; it was later re-titled “The Treasure of Tranicos” when it appeared in the Gnome Press Conan editions. “The Black Stranger” has become the definitive version, and it has re-appeared many times since.

Third, while later volumes in the series included lengthy introductions by Wagner, Sam Moskowitz, and Forrest J. Ackerman, this volume contains only fiction. The other two stories are Leiber’s 1947 Fafhrd and the Gray Mouser novella “Adept’s Gambit,” originally published in his collection Night’s Black Agents, and Kuttner’s “Wet Magic,” the tale of Morgan le Fay in World War II Britain, originally published in the February 1943 issue of Unknown Worlds magazine.

Wagner managed two more Echoes of Valor volumes, in 1989 and 1991, before he died. All three are highly collectible today. Here are the next two:

Echoes of Valor was published in Feb 1987 by Tor Books. It is 286 pages, priced at $2.95. The cover is by Ken Kelly. It has never been reprinted, and there is no digital edition.

Isn’t it time for someone to do some anthologies from Unknown? (Have there been any since the old Pyramid paperbacks?)

Such a great series — I wish he’d managed more installments.

> Isn’t it time for someone to do some anthologies from Unknown?

Considering that the last one I know about was 40 years ago, I’d say yes!

> (Have there been any since the old Pyramid paperbacks?)

Not to my knowledge. Pyramid did two volumes in 1963/64; we covered them both here:

The Echoes of Valor series is one of my favorites, and I pick up spare copies any time I come across them.

Baen published a collection of stories from Unknown entitled Unknown in 1988. It was edited by Stanley Schmidt with a Thomas Kidd cover and contained 9 stories. ISBN 0-671-69785-4.

Galahad Books, which is a British publisher IIRC, published a substantial hardback, also in 1988, entitled Unknown Worlds Tales from Beyond. It had a blah cover but contained 25 stories. I think I picked my copy up in either a Waldenbooks or a B. Dalton’s in the remainder bin. It’s been so long I don’t recall exactly. I just remember reading it one night while I was sitting up with my grandmother in the hospital. ISBN 0-88365-728-7

One of my most prized possessions is a set of 10 consecutive issues of Unknown (Oct. 41 – Apr. 43) in a single library bound hardcover that I found online about 15 years ago.

Thomas, you’re right, it’s time for some more anthologies that focus solely on Unknown. I think at the time it was better than Weird Tales. Too bad the paper shortage in WWII killed it.

> Baen published a collection of stories from Unknown entitled Unknown in 1988. It
> was edited by Stanley Schmidt with a Thomas Kidd cover and contained 9 stories.

Right you are… this inspired me to track this book down for my VINTAGE TREASURES post today. Looks like this is an abridged version of the Galahad Books hardcover? They were both edited by Schmidt, and released the same year.

I’ll compare the contents in my article. Thanks for the tip!

[…] a brief article on Echoes of Valor II today, continuing the series as promised after I covered the first volume last […]

[…] Karl Edward Wagner continued his sword-and-sorcery anthology series with Echoes of Valor II, published in hardcover by Tor Books in August 1989, two years after the release of Echoes of Valor. […]