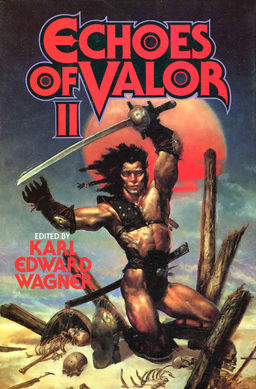 Karl Edward Wagner continued his sword-and-sorcery anthology series with Echoes of Valor II, published in hardcover by Tor Books in August 1989, two years after the release of Echoes of Valor.

Wagner settled into an established pattern with this volume. The first one had been unusual for a couple of reasons. For one thing, it contained only novellas — three big stories by Robert E. Howard, Fritz Leiber, and Henry Kuttner. Not that you can go wrong with Howard, Leiber, and Kuttner, but the next two books in the series offered a more varied table of contents.

Echoes of Valor had also been bare bones from an editorial standpoint. Not even an introduction, let alone commentary on the stories. Wagner rectified that with Echoes of Valor II, which included new and reprinted story intros and author retrospectives by C. L. Moore, Sam Moskowitz, Forrest J. Ackerman, and Wagner himself. This seems more what Wagner had in mind for EoV, which he clearly intended to be a definitive S&S anthology series.

In fact, it’s probable that the first volume was put together much more hurriedly than the last two. Not only was it missing the editorial content that would be the hallmark of the series, but it went straight to paperback. Echoes of Valor II appeared first in a handsome hardcover edition, and was reprinted in paperback in February 1991.

This one contains a rich assortment of classic S&S and heroic fantasy, including a Conan tale by Robert E. Howard, a Jirel of Joiry story and two Northwest Smith tales from C. L. Moore, a Venus novella by Leigh Brackett and Ray Bradbury, and a Hok the Mighty novella by Manly Wade Wellman… along with fascinating articles on how some of the stories came together.

The cover of the paperback edition (below right, click for bigger version) made a big deal out of the fact that EoV II contained Robert E. Howard’s first Conan story, “The Frost-King’s Daughter,” “never before in book form.” 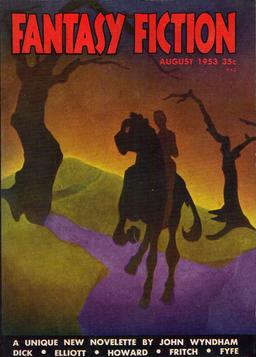 It actually includes two versions of the story, which was indeed the first Conan tale. When it was rejected by Weird Tales, Howard replaced Conan with Amra of Akbitana and changed the title to “Gods of the North,” where it was published in The Fantasy Fan in March 1934.

According to The Conan Wiki, when L. Sprague de Camp found Howard’s original manuscript he changed the title to “The Frost Giant’s Daughter” and extensively rewrote it; that version appeared in the August 1953 issue of Fantasy Fiction (cover right). Howard’s original manuscript first appeared in Donald M. Grant’s Rogues in the House in 1976; this is the version Wagner includes in Echoes of Valor II.

The essays and retrospectives Wagner assembled for EoV II were much more detailed than the usual two-paragraph story intros for anthologies of this ilk, and fans of sword & sorcery treasured them. They were often highly personal, and usually 5-7 pages in length. 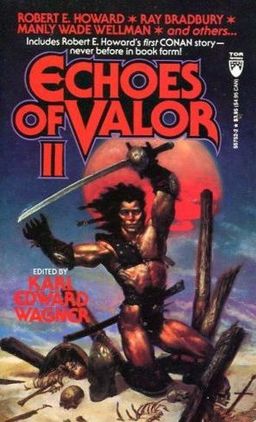 Here’s the non-fiction table of contents:

Echoes of Valor II was published in August 1989 by Tor Books. It is 274 pages, priced at $17.95 in hardcover and $3.95 in paperback. The cover is by Rick Berry. It has never been reprinted, and there is no digital edition.

We’ve also covered the other two volumes in the series:

This series was one of the most influential from a personal standpoint of any I’ve come across. I was (and still am) a rabid fan of Kuttner and Moore (collaboratively and individually) as well as Brackett. At the time the EoV books were published, I had acquired almost all of the work by those three that was easily available in my area in the preinternet days. At the time, this volume was like finding the Holy Grail.

I know what you mean, Keith. For me, it was seeing the seriousness with which Wagner approached the material — as vital work deserving of scholarship — that impressed me. I bought the third volume as much for the non-fiction as for the fiction.

Sigh. Fine. Remind me of another series on my shelf that I need to reread someday. 😀