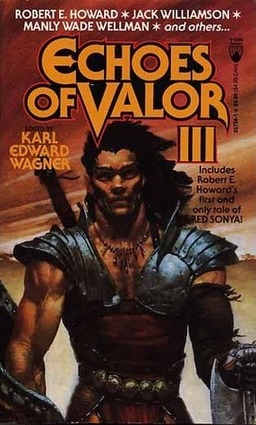 And so we come to the end of our all-too-brief series on Karl Edward Wagner’s ambitious and highly regarded sword & sorcery anthologies. Echoes of Valor III was published in paperback by Tor Books in September 1991, just three years before poor Karl drank himself to death in 1994.

The three Echoes of Valor books are perplexing in some regards, especially for collectors. Wagner had taken a huge step towards literary respectability for Robert E. Howard in 1977, by compiling and editing the definitive three-volume hardcover collection of the unexpurgated Conan for Berkley: The People of the Black Circle, Red Nails, and The Hour of the Dragon. It’s clear that he intended Echoes of Valor to accomplish the same feat for a wider rage of his favorite writers, by assembling the defining collection of their best heroic fantasy in hardcover — and with non-fiction commentary that treated them to genuine scholarship.

It didn’t quite work out that way. The first volume of Echoes of Valor appeared only in paperback in 1987, and it had no non-fiction content at all. It was also burdened with a Ken Kelly cover that pretty obviously had originally been intended for Tor’s Conan line — I wouldn’t be surprised if most book shoppers in 1987 mistook it for just another Conan pastiche, and didn’t give it another glance.

With the second volume, Echoes of Valor II, Wagner finally got the book he’d aspired to. It appeared in hardcover in 1989 with an original cover by Rick Berry, and no less than eight non-fiction pieces (autobiographical sketches, forwards, and author appreciations) from four distinguished writers: C.L. Moore, Forrest J. Ackerman, Sam Moskowitz and Wagner himself.

Echoes of Valor II was one of the first books to treat sword & sorcery as serious fiction, and the hardcover format meant that Tor was able to sell it into libraries and schools across the country. It was a groundbreaking book for the genre. So it was a bit puzzling when Echoes of Valor III appeared three years later — exclusively in paperback, and with only one brief essay from Sam Moskowitz.

That’s not the only way Echoes of Valor III is different, however. Whereas the first volume featured only novellas, and the second chiefly short stories, for this one Wagner selected seven novelettes, plus one novella from Jack Willamson. He also gave over a third of the book — 125 pages — to a single author, Weird Tales writer Nictzin Dyalhis, who’s celebrated here with three novelettes and an appreciation from Moskowitz titled “Nictzin Dyalhis: Mysterious Master of Fantasy.”

Since all three volumes are so different, it’s easy to believe that Wagner had no strict format at all in mind for the Echoes of Valor books. We’ll probably never know for sure.

That’s all part of their mystery and charm, however. And no matter how you look at them, all three contain excellent fiction, and some very enjoyable and entertaining discussion of some of the greatest pulp fantasy of all time.

This volume contains “The Shadow of the Vulture” by Robert E. Howard, the story that introduced the world to the famous Red Sonya, a Hok the Mighty tale by Wagner’s close friend Manly Wade Wellman, a werewolf story by Jack Williamson, three stories by Nictzin Dyalhis, and two by Henry Kuttner.

Since I can never pass up an opportunity to showcase pulp art, here’s all the original magazines these stories appeared in:

And here’s a look at Nictzin Dyalhis’ tales. Dyalhis was published almost exclusively in Weird Tales, but his fiction was reprinted in a number of magazines and paperbacks over the decades. The stories herein are “The Red Witch, from the April 1932 Weird Tales (cover by C. C. Senf), “The Sapphire Goddess” from Weird Tales, February 1934 (cover above right), reprinted as “The Sapphire Siren” in Avon Fantasy Reader #17, November 1951 (cover by Barton), and “The Sea-Witch,” from December 1937 Weird Tales (cover by the great Virgil Finlay.)

And here’s the complete table of contents for Echoes of Valor III:

Echoes of Valor III was published by Tor Books in September 1991. It is 374 pages, priced at $3.99 in paperback. The cover was by Ricky Berry. It has never been reprinted, and there is no digital edition.

Another great collection. And I love all of those covers!

Thanks Joe! If I have time this weekend, I’ll go back and add some pulp covers to the previous installments, too.

Someone really needs to put together a Nictzin Dyalhis eBook collection.

Thanks for this series on Echoes of Valor, John. For me personally, they were some of the most important books I read in high school and college.

And I agree with Joe H. There needs to be a Nictzin Dyalhis ebook collection.

> Someone really needs to put together a Nictzin Dyalhis eBook collection.

> Thanks for this series on Echoes of Valor, John. For me personally, they were some of the most important books I read in high school and college.

You’re most welcome, Keith. I just wish I’d found them in high school — I didn’t discover them until 20 years later.

Now I begin to understand why KEW was such a big deal. I’d never really registered him as a presence in the genre until I became a regular reader here at BG.

On a completely frivolous note, I have to say that the name Nictzin Dyalhis looked so much like it had started as an anagram for something else, I had to go run it through an anagram generator. Although “Clannish Ditzy I” has its charms, “Chain Ditzy Nils” seems more like something that would happen in a Sword and Sorcery dungeon. “Cannily Hid Zits” described the indignities adolescence held for all of us. “Satiny Zilch Din” would be an excellent band name.”Zany Chitin Slid” could caption many pulp cover image. And that’s more than enough of that.

> Now I begin to understand why KEW was such a big deal. I’d never really registered him as a presence
> in the genre until I became a regular reader here at BG.

He’s highly regarded for his fiction, too. His Kane stories aren’t to everyone’s taste, but if you get a moment, I urge you to read “The Dark Muse,” which I reprinted in BLACK GATE 1. I consider it the finest sword & sorcery tale I have ever read.

> On a completely frivolous note, I have to say that the name Nictzin Dyalhis looked so much
> like it had started as an anagram for something else, I had to go run it through an anagram generator.

LOL! OMG, I don’t know why no one has ever done that before. Genius.

The name Nictzin Dyalhis has instantly convinced more than one reader that it must be a pseudonym. That’s not helped by the fact that very little is known about him. (Read Sam Moskowitz’s “Nictzin Dyalhis: Mysterious Master of Fantasy” if you ever get the chance.)

He has just the kind of vague, almost contradictory biography that today screams “pseudonym!” But no one’s been able to prove it.

I recently used all three of these for references for an article I was doing. Lots of great stuff in this series.

Thanks for that link! For those of you too busy to click on it, it summarizes pretty much everything known about Dyalhis, with the very thorough detective work by Steve from Bear Alley Books.

Wkeil – Do you happen to know Steve’s last name? That’s a great little article, and it deserves more exposure. It would be good to get permission to reprint it.

What was the article for?

I was told by Jeff Betancourt himself that Wildside Press will be publishing a Nictzin Dyalhis Megapack eBook in the future. It’s yet to be determined whether it’ll be a part of their new Golden Age of Weird Fiction series or just a standard Megapack, but it’s definitely going to be published. I can’t wait!

Excellent news! I’ll be picking up the Megapack as soon as it becomes available …