While interviewing Associate Editor Jake Thomas of Marvel Comics for my last blog post (see Middle Child) , we also talked a bit about horror in comics and where it fits, what fans are looking for, etc. It turns out that until recently, I hadn’t gone all the way to thinking about comics as a horror medium, partly because I’d never found them scary.

The old saw is that, other than superheroes, comics chased movies and TV, so that when westerns were popular, the comic industry produced cowboy books, and when SF movies were popular, they made SF comics, etc. And the 70s of course was the era of The Exorcist, The Shining, Jaws, and so on.

Some of the grotesqueries of the 1950s drove the creation of the Comics Code, but I guess I’d looked at the post-Code books like Tomb-of-Dracula and Man-Thing and Werewolf by Night as monster books, rather than horror.

There’s only so much you can do within the code, which was part of the reason why Marvel experimented with magazine-sized black and whites in the 1970s, which, by today’s standards (ex.: Severed or Wytches, from Image) look like a tea party… the little kid play, not the political movement.

However, despite being not scary, there was a rich subtlety in some of Marvel’s spooky books, an unreliability of perception, that drew me in, as a pre-teen and teen, and probably helped form some of my tastes.

In the summer of 1981, my mother gave me four comics, one of which was Doctor Strange #43. Doctor Strange was soooo wierd, but good, knock-off Chthulhu good.

And I hunted down Doctor Strange everywhere I could find him, which led me to the Defenders, another oddball child of the 1970s.

The Defenders, of course, introduced me to Daimon Hellstrom, one of the most Jungianly-conflicted characters in the Marvel universe, the guy with the king of daddy and identity issues, who glowered at things under the moniker of Son-of-Satan. 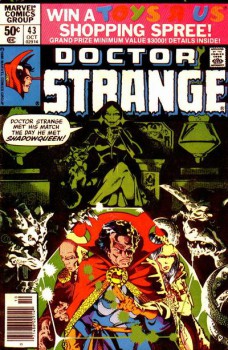 I was also lucky enough in my grade 7 year for my school to be close to a second-hand book shop that, among other things, sold comics at half their cover price. Seeing as how I was spending allowance money, 25¢ cover-price comics hit my affordability pretty well and there seemed to be a steady stream of second-string 1970s Marvel titles like Marvel Premiere, Marvel Spotlight, Son-of-Satan, Amazing Adventures, Tales to Astonish that filled in the genre portion of my collection.

So, I scooped up a whole lot of Son-of-Satan stories. Daimon’s story drew me in because unlike Tomb of Dracula or Werewolf by Night or It, the Living Colossus, there was a vast philosophical and cosmological world behind him, that made even his smallest adventures seem like side-voyages in an epic.

I mean, think about it: Daimon was rebelling against the greatest rebel in the Judeo-Christian culture. Not only that, his father was all ambiguous motives. For a while, it would be persecution and pursuit, then pride, then anger, and behind it all, my certain knowledge that this is the Prince of Lies, and it all could be a put-on to trick Daimon for some deeper reason.

I would have loved to have seen the sales numbers for Marvel Spotlight, where Daimon starred for over a year. Because it seems to me the numbers must have been good, because they graduated him to his own title.

But then Son-of-Satan lasted only 8 issues. I don’t know if it was the switch in titles, or shifts in the creative team.

It’s too bad. The Marvel Spotlight run seemed to my mind darker artwise and tone-wise, and maybe the new series didn’t cleave close enough to Daimon’s raison d’être, which was to oppose his father.

Daimon’s conflict did play out powerfully in the Defenders. In seven or eight issues leading up to Defenders #100, Satan maneuvered the non-team and his son like chess pieces, employing feints, decoys, lies (like Patsy Walker was his daughter), to culminate in Hell merging with the Earth.

And, all of this, all of it, was just a big diversion to get Daimon to agree to come to Hell and take up his birthright as his father’s son. And in the end, we’re still not sure if it was a family play motivated by love or another chess play within a chess play.

Daimon did have a couple of later incarnations. In 1993, Hellstorm starred Daimon, his rise to power and the eventual overthrow of his father. It was definitely more mature in every way and featured the writing of Garth Ennis for the last half of its some 2-dozen issues.

As well, in the mid 2000s, Marvel launched a 5-issue limited series that was a brilliantly-done detective story, with quite a bit of humour, that, tone-wise for me, was a departure too far from his original conception. Still, very enjoyable.

The Son-of-Satan has continued to make appearances here and there, but the core conflict of father-versus-son in a moral, cosmic, epic way hasn’t been the focus of a series for a while, which makes the early issues, with their energetic creativity so valuable, despite the occasional dud that most comics in the 1970s suffered from from time to time.

Derek Künsken writes science fiction, fantasy and horror in Gatineau, Canada and tweets at @derekkunsken. His February, 2014 hard sf story “Schools of Clay” from Asimov’s is available as a free podcast through StarshipSofa.

Defenders was a fun comic ahead of its time, bringing these somewhat oddball, outsider characters together in their own joint — give me Doctor Strange’s Manor over the Avengers Mansion any day!

[…] Detectives edited by Paula Guran The Son of Satan from Marvel Comics The Dance of Death by Algernon Blackwood The Casebook of Sexton Blake, edited […]