I’m having an e-conversation with Jake Thomas, an Associate Editor at Marvel Comics. 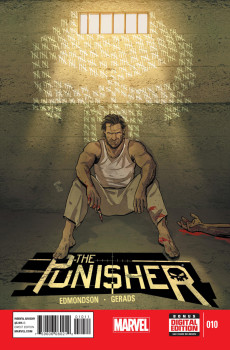 He’s got a ton of editorial credits, as Assistant Editor on titles like Captain America, Avengers, Age of Ultron, and many others, as well as Editor on Iron Fist the Living Weapon, Deadly Hands of Kung Fu, The Punisher and others.

Marvel editors are involved in a lot more than just production.

A main Editor helps develop projects, gives story and art notes, helps with the marketing of the books, all kinds of things. The nuts and bolts of production are by and large the purview of the Assistants. Assistant Editors keep files moving, track schedules, write recaps, do ad lineups, gather reference, run proofs through our various checks and balances, a bunch of the behind-the-scenes work that allows the machinery of comics to keep functioning.

They also act as another set of eyes; they can give script feedback to their editors, check the art as it comes in to make sure the storytelling is solid and everyone’s in the correct costume. Important stuff!

After Assistant Editors have earned their spurs, they get tried out on their own projects as Editors. I was looking at your Assistant Editor work vs. your Editor work. As an Assistant Editor, you were handling the top heroes of the MU, titles associated with a bright, heroic, world-saving tone and a pure superhero heritage. As Editor, you’ve got an assassin who doesn’t know he’s an assassin (Deathlok), a mystical kung fu warrior (Iron Fist) and a brutal vigilante (Punisher). How did that tone shift happen? Did you drive towards it, or was someone saying that they needed an Editor for the darker, grittier side of the MU?

“A bright, heroic, world-saving tone and a pure superhero heritage”? Someone hasn’t been reading New Avengers… 😉

The books that most need Assistant Editors tend to be the bigger, more mainstream titles, as there are a lot more moving parts to keep track of in an Avengers book than there are in Punisher, and the Senior Editors in charge of those titles also have a lot more on their plates. Those big titles are the trial-by-fire for Assistants, you’re essentially thrown into the deep end and have to keep both yourself and the book afloat.

What’s important for any Editor is to establish your voice. While you will certainly be called upon to edit all kinds of books and should be able to do so, you and everyone around you should know what your strengths are.

I love a wide breadth of comics, but I have a particular love for grindhousey action, crazy high concepts, and anti-heroes, and I certainly wasn’t shy about letting that be known. So when a new Punisher book was launching, you’d better believe I told everyone I could that Punisher was my favorite character.

Or when they were looking to do some kung-fu books, they knew they had a guy who understood the language of the genre and would hustle his tail off on those books. And hustle I did! To the point where, sadly, I no longer have a tail.

And as much as I’m (hopefully) building my name on these gritty, largely street-level stories, one of my favorite things I’ve done at Marvel was the 2013 Avengers Annual with Kathryn Immonen and David Lafuente, which was this super silly, heartwarming Christmas story that I absolutely adored.

On Iron Fist, Kaare Kyle Andrews writes and draws Danny’s adventures. In other titles, the duties are often split up. Is a Writer/Artist set-up easier or harder for an Editor? Is the process the same: Step #1 script approval, Step #2 art?

Every book is different, but Kaare’s books are INCREDIBLY different. I don’t get scripts from Kaare. We get on the phone, and we’ll talk big picture stuff, where the story’s going to go, how it’s going to get there, and some particular visual flourishes he’s looking to put into the book. And then, instead of a script, he sends me a full issue of layouts with the dialogue on them, and I give him notes from there.

It’s an insane way to work, but for the book we’re doing, it’s perfect. He’s really feeling his way through this book in this incredibly organic way, pushing himself to try all these crazy ideas, it’s invigorating to be a part of that guy’s work.

In a panel podcast of the Marvel Editors done by Nerdist Comic Panel (listen to it here), you mentioned that you liked genre stuff – specifically citing Westerns and Kung Fu. What do you like about genre stories? For the comics of today, does genre do better when mixed with a superhero angle, or do you dream of trying a full-on western or a real monster book (like the comic field saw in the 1950s and 1970s)?

I love genre stories because I believe they encourage abstract thought. They play with ideas and iconography. They can sneak up on you with big questions in a way a more straightforward story can’t. Often, straight drama deals in “reality” and genre deals in “truth,” which I find the trickier and more interesting concept.

Being a super hero comic company, it’s certainly easier to get a genre story made if there’s a super hero in it. I’ve managed to do Kung Fu stories with Deadly Hands of Kung Fu and Iron Fist, gonzo zombie horror with Marvel Zombies Destroy, and Punisher and Deathlok have allowed me to do both action and war. 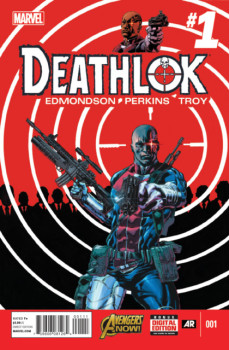 I’m assisting on a project that will be announced soon that is crazy exciting and will scratch another of my big genre itches, as well as another project that will give me a ton of room to play in a bunch of different types of stories.

In all those books the super hero-ness has rarely ever overwhelmed the genre-ness, so I’ve never felt particularly shackled by the Marvel-ness of those heroes in those books.

All that being said, I’m constantly pushing for more crazy genre content, so anywhere I can find to practice my particular breed of madness, I’ll take it. I’ve got ideas, man. IDEAS.

That sounds really cool. Everyone in creative fields is constantly growing in their craft. How have you grown in the last couple of years and where do you want to grow as an editor?

Tom Brevoort, Marvel Editor Supreme and my old boss, always says that 90% of a successful book is casting. If you put the right Writer and Artist on a book, you’ve done most of the heavy lifting. Consequently, casting a book as always absolutely scared the crap out of me, but I think I’ve gotten better and more comfortable with it recently.

There are a couple of teams I’ve put together that I’m particularly proud of. I’m sure I’ll still screw up on that front time and time again, as this whole business, and particularly casting, is more of an art than a science, but I’m certainly getting more stable with it.

I’ve also been doing my genre books for a while now, and while I think those genre books are my home, I’d love to be able to pull off a real, honest-to-goodness SUPER HERO book.

I’ve gotten to assist on some absolutely incredible super hero runs and events, like Hickman’s Fantastic Four and Avengers, Jason Aaron’s Incredible Hulk, Kieron Gillen’s Young Avengers, Avengers vs X-Men, Infinity, Original Sin, just to name a few. I stand in absolute awe of those books and the Editors who put them together.

Handling stories that massive, with characters that beloved… that would be a HUGE honor. So I keep training my eye for art and my story sense, day in, day out. It’s a pretty incredible process to be a part of.

Thanks for the interview, Jake. It’s been cool to look into a part of the comics world we don’t normally get to see. Keep us up to speed on news of your new projects!

Thanks for giving me a platform to talk comics, Derek!

For readers who want to know more about Jake and his work, check out www.marvel.com, @JakeGThomas, the play The Dead Dream Machine, and Raging Squid Ink.

Derek Künsken writes science fiction, fantasy and horror in Ottawa, Canada and tweets at @derekkunsken. His story Dog Paw was recently selected for inclusion in Ellen Datlow’s Best Horror of the Year Volume 6 and was also podcast at Pseudopod.org with British accents. You can listen to it here for free.

That was a good “in the kitchen” interview to see how comics are cooked up. I’d like to have heard more about bad casting problems. I find it interesting that the industry terms the word casting meaning the artist and writer whereas Hollywood and other look at the actors playing the parts of the characters. I think the big difference is that the actors don’t usually do their own script writing, but comics do. That is why I and the vast majority of my friends no longer read comics. In recent history Marvel writers have interjected their personal politics into the stories to grandstand their own political platform. Most of what I read was swill and I dropped reading a line that I had read since I was twelve years old. Comics are more like political narratives and in my opinion they’ve lost the story telling quality they once had. The Hollywood writers seem to understand their audience and the characters much more than the actual writers in the comic industry. It is sad really.

I would like to have asked him about Todd McFarlain. I understand that Todd left Marvel to do his own thing at Image largely because he was fed up with the politics at Marvel. It would have been interesting if he knew something about that but that was a long while ago back when Marvel comics were worth reading.

Thanks for talking about Iron Fist. That was one of my favorite characters and I felt he never got a serious chance. I might give it a shot after I see the movie. I don’t know much about Kaare’s work.

Hey WildApe! Thanks very much. It was a fun interview to research and interview. I agree on Iron Fist. I think he’s become incredibly interesting as a character since the Fraction/Aja run around 2007-2009 with the Seven Cities, and it’s fascinating to watch Kaare toggle between two artistic styles, a more typical one for the present, and a sepia-toned, dreamy one for the past seen through young Danny’s eyes.
Derek

I like the Arrow series and Gotham. I think they capture the style of Iron Fist if given a dash of Bruce Lee. I don’t mean to take credit away from the Dark Knight by Miller but before the new take on Batman there was the Iron Fist storyline. This has become the “how they learned how to fight” origin.