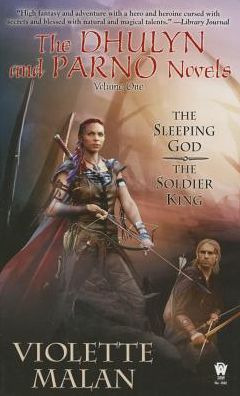 When Amazon created a mobile Kindle app a few years ago, the very first book I bought and downloaded to my mobile phone was The Sleeping God, the first Dhulyn and Parno novel by Violette Malan, our Friday blogger here at Black Gate. It proved a marvelous diversion during slow moments while I was working the floor of the NACHA banking conference in 2013.

I’ve wanted to read the other books in the series ever since, and now DAW is making that easy with a pair of omnibus volumes collecting all four novels. The first, The Dhulyn and Parno Novels: Volume One, containing The Sleeping God and The Soldier King, was released last week.

Dhulyn Wolfshead and Parno Lionsmane are members of the Mercenary Guild, veterans of numerous battles and missions, and masters of martial arts. But more than that, Dhulyn and Parno are Partners, a Mercenary bond that can only be broken by death. And though one’s past is supposed to be irrelevant to a Mercenary Brother, who they’d been might make the difference between success and failure in their missions.

As far as she knows, Dhulyn is the last of her tribe, the sole survivor of a terrible massacre when she was a young child. Sold into slavery and rescued by a pirate, Dhulyn has learned the hardest lessons life has to teach. What she has not learned is to master her Visions, glimpses of the future.

Parno never mentions his past. Yet his manners and speech give him away. Parno has been raised in more civilized lands, and obviously comes from a family of some importance. Why he’s abandoned them or been cast out, neither Dhulyn nor any Mercenary Brother would ask.

After saving one of the Marked — those gifted with such powers as the ability to Find, to Mend, to Heal, to See — the two Mercenaries realize that those bent on the Marked’s destruction appear to be under the influence of a priest of the Sleeping God.

Soon not even Dhulyn’s Visions can prepare them for the fate that awaits them, as they become tangled in wars against invaders, royal surrenders, and enemy prison camps.

The Dhulyn and Parno Novels: Volume One was published on February 3, 2015. It is 896 pages in paperback, priced at $9.99. There is no digital edition. The second omnibus volume, containing The Storm Witch and Path of the Sun, is due May 5th.

This is so much fun! I never thought I’d be in a New Treasures post. Thanks John!

You’re very welcome, Violette! I was very excited to see this finally arrive. 🙂