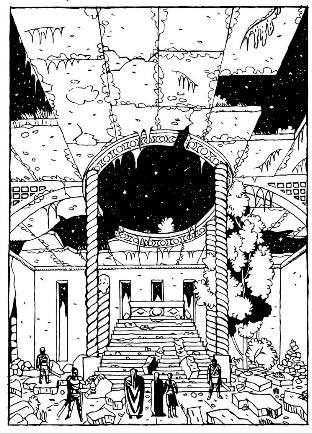 Dusk was overtaking them as they neared the Old City. Next to Opyros rode Ceteol; a high collar masked her bruised throat.

Fired with the spirit of the venture, Opyros was in a voluble mood, and eventually he succeeded in stirring Kane from his choler. Kane declined from further argument over the poet’s design, and as the other spoke of his hopes for the evocation, of his eagerness to explore the unknown wonders of dream, he found himself sharing Opyros’s enthusiasm. To unlock’the gates of dream… Kane, too, sensed deep fascination for such an exploration. True, there were risks, unknown risks – but what great adventure had ever been free of danger? In fact, by definition, how could there be adventure without danger? Security equals boredom equals stagnation equals death. Kane listened and nodded, added thoughts of his own, so that by the time they entered the forest-buried walls of the Old City, Kane was contemplating the onyx figurine with a thoughtful brow.

“It’s gone again,” she said with a frown. The girl pointed. “See how our shadows are all strung out in a line?” The declining sun cast light enough yet to throw the riders’ spindly, misshapen shadows against the trees which crowded the unfrequented road wherever there was sufficient clearing to let them pass from under the shadow of the trees opposite.

“I’ve seen it a couple of times,” Ceteol continued, “just out of the corner of my eye. When we come to a sunny spot, I’ve noticed how all our shadows writhe alongside us. But a couple of times I thought it was strange, because I can tell my shadow, and there’s two men riding behind me — except I saw three shadows following my own.”

“What sort of shadow?” Kane wanted to know. “Like another horse and rider?”

“No, not like that.” She jammed the heels of her palms together and wriggled her fingers. “It was sort of … crawly.”

Opyros laughed and looked at her eyes. “Your eyes are still bedazzled from the drug, love. It’ll clear away before long.”

Tossing back her brown hair, Ceteol made a tight face. “I may see shadows, but I don’t half kill a girl and then go off and get drunk with thieves and killers. So don’t laugh at me, damn it.”

“Tell me next time you see it,” suggested Kane. Then to Opyros: “You did say nothing untoward took place after I left you.”

The poet shook his head, trying to tell how much of Ceteol’s sullenness was only affected. “No, nothing happened. After I… ah… told Ceteol of our plans, I slept until not long before you called. I remember that damned pack of dogs started yelling – woke me up.”

“Didn’t see them when we rode up,” mused Kane.

“Somebody else chased them off, I gathered. But where in all this ruin is the temple of Shenan?”

“Not far, though it’s a little past the main body of the ruins.”

The Old City had a certain ghostly beauty in the twilight, the melancholic serenity of ancient walls returning to dust with their secret memories of another age. Compared to its sprawling offspring Enseljos, the Old City had been but a town. Most of its buildings had been of timber, and these were long since weed-shrouded mounds of earth-forgotten graves in the forest. Here and there a low stone wall or heap of broken masonry indicated the site of some antique structure, but more often, there was only an overgrown depression along the fading streets to mark the foundation of a long-toppled dwelling. Still, there were places where the walls of one of the Old City’s more impressive buildings yet rose in tired defiance of time. As the dusk deepened, the darkness within these mouldering skulls seemed to flow from staring windows and yawning doorways and mingle with the gathering shadows of the forest.

“Here,” announced Kane, and he urged his horse between the closely hemmed brushy barriers. A late morning rain had drenched the forest, so that progress through the brush left their legs sodden against their mounts’ flanks.

The waning light fell upon a grey stone structure standing in gloomy solitude among the shouldering trees. Its walls rose to almost clear of the encroaching branches; buttressed and vaulted after the southern fashion, portions of the temple yet retained an arched ceiling. The deeper Shadow within had spared its interior the rank undergrowth which strangled much of the Old City’s ruins, although age had stripped the walls to bare stone and littered the floor with crumbling debris. As twilight closed upon the ruined temple, the velvet-leather curtains which festooned its high-vaulted ceiling spread a thousand wings and flapped cluttering through the broken apertures.

Kane dismounted and directed his men to clear away some of the rubble which barricaded the entrance. The poet pressed forward in excitement; Ceteol, aloofly curious, followed him, her calf-length pleated skirt slapping against high riding boots. As soon as he had kindled a pair of links, Kane joined them, and while his men shoved away the rotting tangles of anonymous debris, he spoke further on the temple’s history, raising his torch to point out some item of architectural interest. Opyros again sensed an uneasy wonder at Kane’s nonchalant familiarity with the ruins.

Moonlight poured molten silver over the brooding grey stones by the time Kane judged their work sufficient. Showers of silver light fell through the high, narrow windows and jagged rifts in the walls, gathered in a deep pool about the altar, where a vast circular skylight showed the same night skies to which priestesses centuries dead had raised their chants. In a few areas where the litter had been cleared away, the damp stone tiles yet bore traces of strange mosaic patterns.

At Kano’s orders, Levardos saw to posting the men outside. They were well paid, and if their leader chose to waste the night pursuing a mad poet’s unhallowed whim, that was Kane’s affair. Theirs was to watch for Eberhos, in case the alchemist had followed them with another band of hirelings. That he had fled Kane’s anger was their consensus, but if not … their blades were ready.

Kane turned to his friend. “Well,” he said, half in question.

The poet’s eagerness was undiminished. “I’m ready if you are, Kane. This place is perfect — really it is! The atmosphere – it’s . . . hell, I’ve tried to capture it again and again in my verses! What dreams hover about us here! Kane, if the muse will only come to me tonight. . . I feel I can . .. can … I feel I can grasp the inspiration I’ve searched for so long! Night Winds and a hundred more could soar from my soul tonight!”

A bitter smile twisted his face. “As you wish, then,” assented Kane. He extended his hand, “The simulacrum.”

Opyros thrust the carving into Kane’s hand. “No musty tomes? No evil-fumed braziers and elder-glyphed pentacles?” But his levity was more bravado than banter.

“As I’ve said, a simple spell,” returned Kane levelly. “I’ll need a drop of your blood.”

And while Ceteol watched with unfathomable eyes, Kane led the poet into the pool of moonlight; there by the forgotten altar of dark, flawless stone he performed those things which the ritual required.

The complete version of “The Dark Muse” appears in Black Gate 1.