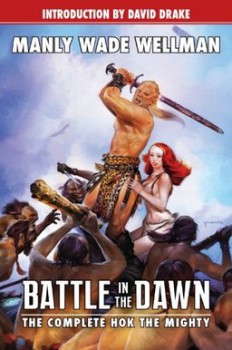 Historical adventure fiction is one of the primary roots of swords & sorcery. From it you get the same fast-paced adventure in exotic settings.

Manly Wade Wellman spent his childhood in a primitive village in Portuguese West Africa. Till he died Wellman spoke of a young boy forced to kill a leopard in order to protect cattle. Other boys had been less lucky and had fallen prey to leopards. His time and experience in Angola was perhaps the greatest influence on his life, but most certainly on his prehistoric stories.

In 1939, after a decade of writing pulp science fiction with titles like “The Disc-Men of Jupiter” and “Outlaws on Callisto,” Manly Wade Wellman introduced his Cro-Magnon hero, Hok the Mighty, in the novelette “Battle in the Dawn.” Four stories followed before he retired the character. While there’s a strong anthropological component to the Hok stories, with footnotes explaining then-current thoughts on the discoveries made by early man, these five tales get progressively more fantastic.

In 2010 Paizo collected all the Hok stories, along with several fragments and the cavenmen vs. Martians mini-epic “The Day of the Conquerors,” in Battle in the Dawn: The Complete Hok the Mighty for their Planet Stories line.

Hok is the first born and mightiest son of the leader of a small, wandering family of Cro-Magnon people who have migrated north into Europe seeking game. Hok and his brother Zhik react with visceral disgust at their first encounter with a Neanderthal. Even after they frighten it away they’re still revolted by its lingering stench. The Neanderthals (dubbed Gnorrls by Zhik in imitation of their shouts) are too alien to be able to exist in any sort of comity with Hok’s people. For their part, the Gnorrls see no kinship with the newcomers either, to the point of viewing them as just another, albeit more dangerous, game animal.

“Battle in the Dawn” is a sprawling story. It starts with the first, bloody encounters between Hok’s family and the Gnorrls. It covers Hok’s journey south to find himself a wife. Finally, it builds to terrific bloodshed between the Gnorrls and the invading Cro-Magnon tribes. Hok is forced to use all his wits to forge some sort of alliance at a time when few people live in any sort of society larger than an extended family. 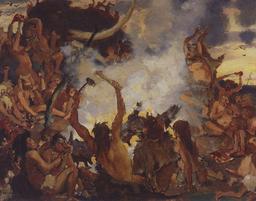 In the course of the story Wellman describes how flint tools and weapons were made and how Cro-Magnons may have come to live in caves. Danger of sudden violence is omnipresent and even the women of Hok’s time, the book’s terrible cover notwithstanding, are nearly as ferocious and deadly as the men. Constant vigilance is needed if the family is to survive, and the labor to secure food and water is never-ending.

The second story, “Hok Goes to Atlantis” introduces euhemerism, the idea that myths have their roots in factual events, one which Wellman believed. While out alone exploring beyond the furthest southern boundaries of his people’s lands, Hok is astounded by a party of warriors riding horses (which, Wellman informs the reader, might be the origin of the centaur). Led by a warrior woman named Maie, they are explorers from the city of Tlanis. Hok is half threatened and half cajoled into following the band of strangers to their home. Tlanis is a city walled on one side by a great wooden palisade and on the other by the as-yet-unbreached Straits of Gibraltar. Though Hok seems barbaric and backward to Tlanis’ people, Maie becomes becomes enamored of him and the ruler and priests of the city come to fear him.

Hok comes face to face with an opponent as wily and as inventive as himself in “Hok Draws the Bow”. During a potentially deadly encounter with a band of Gnorrls Hok is saved by the intervention of a red-haired Cro-Magnon named Romm. Hok’s gratitude soon turns to suspicion and then anger when Romm tries to openly undermine Hok’s leadership of the tribe.

Despite a dubious idea about the etymology of the word bow, there’s some fun speculation in this story. Hok is inspired to create what is possibly the first bow and arrow when he encounters the deadly accuracy and increased range of Romm’s javelin when used with an amentum (a leather strap used to stabilize the javelin). That the crafty Romm has red hair might connect him to dangerous figures like the Egyptian god Set or the Norse god Loki. 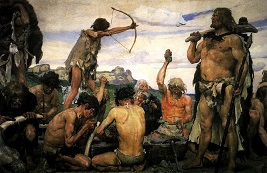 “Hok and the Gift of Heaven” is the weakest story in the book. Despite several high-tension sequences as Hok’s Flint Folk battle the Fisher Folk under their leader Djoma, there is a coincidence of such ridiculousness that it ruins the story. The “gift of heaven” is a chunk of meteoric metal. Hok’s usual curiosity and cleverness let him learn how to use it as a weapon. Wellman excels at packing a lot into thirty pages of writing and there is great stuff here but the utterly ridiculous finale is unforgivable.

“Hok Visits the Land of Legends” is the Cro-Magnon warrior’s last, and most fantastic, adventure. While tracking a woolly mammoth that he’s wounded (with a jury-rigged ballista!), he finds a hidden valley. In it is a mammoth graveyard, another species of man, and terrible survivors from the Age of Reptiles.

Despite, as David Drake points out in the book’s foreward, some bad science, this story is easily my favorite. Wellman may have become a master of folky spook tales with his Silver John stories, but here he’s a master of pure, pulpy action and adventure. Caveman fights giant wolves? Check! Caveman fights giant pig-monster? Check! Caveman fights flying horrors? Check! Plus a village in the treetops and endless miles of mammoth ivory? Yeah, this is an example of how the best pulp stories can deliver thrilling adventure even when they’re seventy years old. 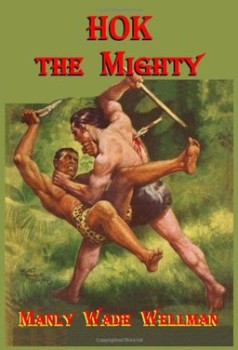 The bad science is pretty bad. The people Hok meets are Piltdown Men, a type of early man thought to be a precursor to the Cro-Magnons. Unfortunately for the story it turned out that Piltdown Man was actually one of the greatest hoaxes ever carried out and in 1953, forty years after he was “discovered,” he was debunked. There are a few more bits of wrong science but that’s easily the worst.

Battle in the Dawn is very pulpy. Pulp can mean bold, uncomplicated writing, and there’s plenty of that here, but it can lack subtlety and complex characterization, which is often the case in the Hok stories. Exciting as his adventures are, Hok’s a pretty thin character.

The romance, which really starts as a straight bride kidnapping, is clumsily written if I’m being polite. After Hok realizes the kidnapped Oloana would rather die than stay with him he frees her, but before he does:

His hands grasped her shoulders. Their faces were close to each other. His stare fastened upon her sulky mouth, as full and red as a summer fruit. How sweet that fruit would taste, he suddenly thought. His face darted down upon hers, their lips crushed together for a whirling moment. Clumsy, savage, unpredicted, it was perhaps the first kiss in human history.

That being said, there’s much more good writing in the book than bad. Seventy years ago Manly Wade Wellman looked back another 35,000 years and recreated our world as it might have been. There are ferocious duels to the death and dangerous hunts. Warfare close up and terribly savage. As much as these stories are great fun, there’s a believable aspect to the vivid and dangerous way they present our ancient past.

Wellman never forgot the boy who had to kill the leopard or be killed. That memory gave him a real sense of the tenuousness and harshness of paleolithic life that grounds the Hok stories, no matter how fantastic they get.

Great review article. This has been at the top of my TBR pile for a while, and now I’m really looking forward to it.

The Planet Stories line really is full of treasures.

The only Hok story I’d read before was “Hok Goes to Atlantis” and remembered liking it but I wasn’t sure what to expect from a whole book of caveman stories. Wellman brought the same skill at defining “place” to these stories as he did to Appalachia. I never once didn’t have a sense of how the land looked and even smelled. I don’t think I’m overselling that aspect of these stories.
On top of that, they are filled with fights and action sequences crying out to be filmed. I like Wellman’s Kardios S&S stories a lot but these reek more of blood and fire and the fight to survive.

[…] authors we feature here at Black Gate. Just three days ago Fletcher Vredenburgh reviewed his Battle in the Dawn: The Complete Hok the Mighty, and a while back new Black Gate blogger Alex Bledsoe offered a fine reminiscence of […]

[…] of Fu Manchu, Robert E. Howard’s The People of the Black Circle, Manly Wade Wellman’s The Complete Hok the Mighty, Donald Wollheim’s Tales of Outer Space, Isaac Asimov’s Before the Golden Age, and […]

[…] Battle in the Dawn: The Complete Hok the Mighty by Manly Wade Wellman […]

[…] Wade Wellman, Fletcher Pratt, and Appendix N: Advanced Readings in D&D Battle in the Dawn: The Complete Hok the Mighty by Fletcher Vredenburgh The Lovecraft Circle at the First World Fantasy Convention by James […]