We’re back to our survey of Ace Doubles, this time with a volume from 1960 containing lesser-known novels from two of science fiction’s brightest stars: Bow Down to Nul by Brian W. Aldiss and The Dark Destroyers by Manly Wade Wellman. Ace Doubles didn’t always have a clear connecting theme, but they did in this case, as both novels feature the struggle against brutal aliens who have conquered Earth.

Bow Down to Nul is a Galactic Empire novel, a fairly common theme in early pulp SF, made popular by writers like Asimov and Van Vogt. The empire in this case is a huge stellar realm controlled by the Nuls, an ancient race of giant three-limbed creatures. Earth is a backwater colony world, ruled by a Nul tyrant. The human resistance is disorganized, but aided by a Nul signatory attempting to bring to light abuses on Earth.

As Aldiss noted in his Note From The Author, the set-up strongly parallels the complex colonial relationships he witnessed first hand while serving in India and Indonesia in the forties.

Science-fiction stories featuring galactic empires have always intrigued me, partly because I had the chance of seeing at first hand the uneasy relationship existing between “imperialists” and subject races in India and Indonesia. So there’s a galactic empire in this book with Earthmen on the receiving end as subject race. The plot hinges on the notion that the further spread your empire is, the greater are the opportunities for graft therein.

So the villains of the piece are not so much the all-conquering “nuls,” as the size of the galaxy and the economics involved in its rule. At the same time, the fact that the four central characters each have good reason to mistrust the other three does complicate things.

I hope it doesn’t complicate things too much. Van Vogtian complexities of plot and sub-plot are not for me. This book aims at being a simple study of four pretty hard types each trying to out-think the other.

Bow Down to Nul was Aldiss’s second novel. It was serialized in the March, April, and May 1960 issues of the British magazine New Worlds Science Fiction, under the title X For Exploitation.

It was published under the title The Interpreter in a paperback edition from Digit Books in 1960 (below left), and reprinted three years later, with a much more colorful cover (below, middle).

The 1960 Ace Double edition marked its first appearance in the US. Here’s the book description from the inside front cover.

When Earthman Gary Towler is off work, he is a pariah. For his task as chief interpreter for the corrupt and tyrannical nuls makes other humans avoid him as a traitor.

Nor is he trusted by the three-armed mammoth rulers themselves, especially when they learned that an envoy was on the way from their distant planetary headquarters to investigate charges of corruption on Earth. For the leaders realized that Gary knew too much.

When the humans leading the underground rebellion demanded Gary’s aid or his life, he was caught between two untrustful forces. And his only way out was to make himself into a one-man third force against two worlds’ plotters.

The Four Square edition (above right), with a static but very colorful cover by Josh Kirby, appeared in 1967. I don’t have a copy, but I found the back cover copy online. I usually enjoy Don Wollheim’s blurbs for his Ace Doubles, but this time I prefer this one:

The time: thousands of years hence. The whole of the known Universe is dominated by the Nuls, a huge, three-armed race, almost as old as time itself.

A charge of Nul corruption on an insignificant planet called Earth sets off a dramatic chain of events.

With the impending visit of a powerful Nul investigator and the humans preparing for rebellion, Par-Chavorlem, the tyrannical commissioner of Earth, lays a devious plan.

And Gary Towler, chief interpreter to the aliens, finds himself in a desperate situation. But one in which he sees a chance to liberate Earth.

Ace reprinted the book in a standalone edition late in 1960, with a 40 cent price tag (below left). That was the last US edition.

The most recent printing of the book came from New English Library in 1973 (right), a British edition with a typically colorful cover by the great Bruce Pennington. The novel has now been out of print for 42 years.

Many Wade Wellman’s The Dark Destroyers first appeared under the title Nuisance Value in a two-part serial in Astounding Science Fiction, in December 1938 and January 1939. It was greatly expanded and retitled for its appearance in hardcover as The Dark Destroyers in 1959 from Avalon Books (below right; cover by Ed Emshwiller).

The Ace Double version is an abridged version of the Avalon hardcover. Donald Wollheim didn’t usually abridge novels for his Ace Double line; my theory is that he was looking for a suitable alien invasion novel, to pair with Bow Down to Nul, and The Dark Destroyers was simply the best candidate. It was substantially cut to make it fit, however — the Avalon hardcover is 224 pages and the Ace Double version is less than half that, at 111 pages.

Here’s the book description from the inside cover of the Ace edition.

One Against the Star Things

Slimy ice-cold creatures had taken over the world in one brutal blitzkrieg, and after fifty years of their domination the only humans left were living like animals in the deepest tropical jungles.

Among those tenacious survivors was Mark Darragh, a brash young man who dreamed of the world his fathers had lost, and who decided to make his dream come true.

Travelling by flimsy canoe, armed with hopelessly outdated weapons, Mark started out for the Cold People’s stronghold. Somehow they must have an Achilles Heel — all he had to lose was his life, but if he won, he’d win a world!

The 1960 Ace Double edition of The Dark Destroyers was the last version of the novel to see print until August 2005, when Night Shade Books reprinted the original serialized version of Nuisance Value in Strangers on the Heights (see below).

We’ve covered Brian Aldiss a couple of times at Black Gate, including: 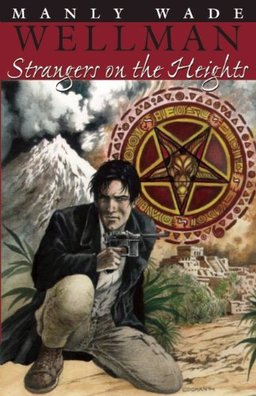 Manly Wade Wellman, Fletcher Pratt, and Appendix N: Advanced Readings in D&D
Battle in the Dawn: The Complete Hok the Mighty by Fletcher Vredenburgh
The Lovecraft Circle at the First World Fantasy Convention by James McGlothlin
Alex Bledsoe on “How I Discovered Silver John”
The Best One-Sentence Reviews of Manly Wade Wellman
New Treasures: The Complete John Thunstone
The Nightmare Men: “The Enemy of Evil” by Josh Reynolds
The Nightmare Men: “The Judge” by Josh Reynolds
Who Fears the Devil? by Ryan Harvey

I covered this in my Ace Double review series a long time ago:

Short version: The Aldiss is interesting, if not close to major Aldiss; the Wellman … not so much.

Thanks Rich! A fine review, as usual.

Any thoughts on if the Wellman suffered from the abridgment, or if it’s just a flawed novel?

Haven’t read the full thing so I can’t say for sure, but I doubt it was ever anything special.