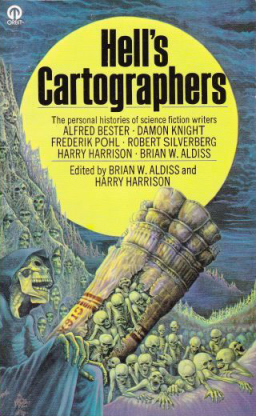 I’ve been enjoying writing my ongoing series on the Ballantine Best of… books. It’s nice to be able to celebrate all those classic SF and fantasy writers, sure, but it’s also an excuse to talk about how I discovered each of them and what their books meant to me personally.

I don’t think I’m unique in this. SFF readers love to talk about the favorite authors of their youth. Look at the comment threads for any of my Ballantine articles — it’s just a bunch of us old fans yakking about the good old days (and yelling at those kids with their Kindles to get off our lawn).

In truth, this is a long-established tradition. Respected, even. Lots of SF authors did it. Asimov and Damon Knight did it, in Before the Golden Age and Science Fiction of the 30s. So did Brian Aldiss, in Billion Year Spree, and Sam Moskowitz, in Seekers of Tomorrow, Under the Moons of Mars, and just about every book he ever wrote. Perhaps most famously, Kingsley Amis did it in New Maps Of Hell, his celebrated survey of science fiction from 1960.

But probably my favorite example is Hell’s Cartographers, a marvelous collection of “personal histories” from six top science fiction writers: Alfred Bester, Damon Knight, Frederik Pohl, Robert Silverberg, Harry Harrison, and Brian Aldiss. This book is packed with countless anecdotes, fascinating references to SF magazines and ground-breaking stories, and tales of awkward adolescences. And for those of us interested in the history of the field, there is treasure on every page.

There are numerous quotes I could tease you with, but I’ll limit myself to this one, from Damon Knight’s entry, “Knight Piece,” which effectively communicates just how hapless these accomplished young men were around women.

[C.M.] Kornbluth… was the least malicious of the Futurians. He told us stories about his relatives. Once, a female cousin stepped into the bathroom after him, locked the door, and said, “Well?” Cyril replied, “I’ll be through in a minute,” finished washing his hands, and left…

None of us knew any girls, or had any way of meeting them, except [Don] Wollheim, whose girl-friend, Elsie Balter, was part of our circle. Wollheim’s courtship was slow… Wollheim gave Elsie a friendship ring after about five years and after another three or four they were married (Telling me about the friendship ring, Elsie said, “And then, do you know what Donald did? He kissed me.”)

The tales they tell are as varied and surprising as the writers themselves, but the theme that emerges — the early love for SF and fantasy, and the way the field seduced them — recurs over and over.

[…] Black Gate Blog Archive Vintage Treasures: Hell's CartographersHell's Cartographers-small I've been enjoying writing my ongoing series on the Ballantine Best of books. It's nice to be able to celebrate all those classic SF and fantasy writers, sure, but it's also an excuse to talk about how I. […]