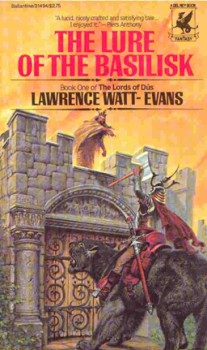 The eighties was full of epic fantasy series’ by the likes of David Eddings, Raymond Feist, Stephen R. Donaldson, Terry Brooks and Katherine Kurtz, to name a few. While many remain giants in the history of the genre, Lawrence Watt-Evans wrote a largely forgotten series: The Lords of Dus.

Watt-Evans has written quite a bit of fantasy, science fiction and horror and is probably best known for his Ethshar series. Ethshar was created as a role-playing game world and he ended up writing many novels and short stories using the setting.

Watt-Evans had flunked out of Princeton’s architectural school and had to wait a year before he could re-apply. He had heard (the possibly apocryphal story) that Larry Niven started his career by deciding to write for one year and if he sold something, continue on: if he didn’t, he’d give it up. Watt-Evans decided to do the same and wrote a slew of short stories, selling one.

He did go back to school, but he wrote a novel (The Cyborg and the Sorcerer) on a summer break and after two years of college, gave it up to make a living with the typewriter (as a writer, not a typewriter salesman).

Influenced by Robert E. Howard, Michael Moorcock and Lin Carter’s anthologies (Flashing Swords, anyone?), he was ready to spin a fantasy saga featuring a non-human (but less effete than a Melnibonian) hero. Thus, the race of overmen.

He wanted to write a ‘quest’ series, so he needed somebody to tell Garth what to do. He borrowed from Robert Chambers and came up with The King in Yellow (yes, people were influenced by Chambers before HBO’s True Detective). So, we had a sort of Elric meets the Labors of Hercules.

The new novel, titled The Overman and the Basilisk, was duly sent to Del Rey books. And silence. Crickets were chirping. Watt-Evans gave up on a writing career and went into the mail-order comic business. Then, ten months after he sent the story out, a buy offer arrived in the mail from Lester Del Rey (somebody here at Black Gate should write a post on the INCREDIBLE influence that man had on fantasy) for what was published as The Lure of the Basilisk. And a career was born. 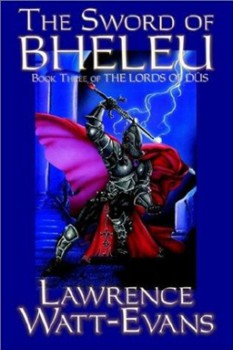 The fist thing to note is that his writing style wasn’t yet very polished and it reads a bit slow.  Hey: the guy was learning his craft.

His protagonist was Garth of Ordunin, an overman. Rather ape-like beings, they had lost the Racial Wars with humans and been pushed to the icy north, where they exist, but certainly do not thrive. The name Simon came from Simon Garth in Marvel’s Tales of the Zombie comic.

Garth is considered to be less than a human. This is similar to Howard’s Conan in that the ‘civilized’ humans viewed the northerner as a barbarian and their inferior. But the overman is more honorable than the humans he encounters; similar to Conan in comparison to those he squared off against.

Garth is more of an anti-hero than a hero, but one does think of ‘the noble savage.’ He doesn’t understand humans (and most of those he encounters aren’t admirable) and they are surprised that he acts better than they do.

He is a prince in his land but wants more, so he visits the standard trope: the old crone (two sisters this time) and laments that life is pointless, full of meaningless death. He’s a big fish in a small pond and will be forgotten. If he can’t change the world, he wants to be remembered forever.

The oracles tell him to travel to a human city and find The King in Yellow and follow his commands. So Garth travels to Skelleth (a dilapidated outpost that has fallen into decay since the end of the Racial Wars) and gets assigned to bring back the first live thing he finds in the crypts under the city of Mormoreth. He mounts his trusty warbeast  (a giant cat-like thing that is beyond deadly) and we’re off!

Watt Evans didn’t want to try the usual ‘kill a dragon’ task, so instead, his hero would have to capture a basilisk and bring it back alive (sounds like a cool module).  Of course, there are all kinds of obstacles: bandits, a power-hungry wizard, an insane local ruler, the beast itself. But Garth battles away.

You’ve seen lots of stories where someone makes a deal for whatever it is they want, then they realize that they framed their objective poorly. Garth realizes that notoriety is an undesirable type of fame and wants the deal changed so that he will be honorably remembered forever.

Since it’s a four book series, I’m not giving anything away to tell you that Garth survives his task. In book two, The Seven Altars of Dusarra, the King in Yellow commands him to bring whatever he finds on the seven altars of the gods in the city of Dusarra. You can imagine how well that goes over with the local clergy!

There’s an over-riding story arc that it’s the end of the Thirteenth Age and one of the items on the altar will be used to bring on the Fourteenth Age, which is the Age of Destruction.

I’m avoiding overt spoilers and sharing info from the book jackets.

The third book is The Sword of Bheleu. Garth had snagged the sword from the altar of the god of chaos and destruction. Bhelu was second among the seven Lords of Dus and the sword brings to mind Elric’s Stormbringer, showing Moorcock’s influence on the author.  Bheleu is to rule in the Fourteenth Age and he has chosen Garth as his avatar.  You know that’s going to get messy.

The series concludes with The Book of Silence.  The King in Yellow wants Garth to bring him that ancient tome, which contains spells that could bring on the Fifteenth Age, which could very well put an end to the world (at least Garth’s name would last until the end of time…).

The first book is pretty typical fantasy stuff. However, we see Watt-Evans growing as a storyteller in the ensuing books. Garth becomes quite an interesting protagonist and we get an understanding of the King in Yellow. The series grows well, as opposed to just muddling along.

In the first book, Garth’s feet a blistering mess from the basilisk venom, we read:

“Ruefully considering this, it struck him how little life resembled the tales told of past heroes. In the stories, when a quest had attained its goal and those opposing the hero had been slain, the story was at an end. There was never any mention made of difficulties in getting the object of the quest back home.”

I like that. It’s ‘The Return’ that Joseph Campbell spoke about in The Hero With a Thousand Faces. Side note: there’s merit in reading other people’s take on the hero’s journey, like Chris Vogler’s The Writer’s Journey, or James N. Frey’s The Key. But if you want to really learn it, read Campbell. I’ve done so several times and there’s nothing better on the subject. Start with that and then see what the others have to say.

Screenwriting talks a lot about conflict as a plot device. Garth runs into different types of conflict everywhere: at home, in Skelleth, with gods and their followers: his quest for immortality is never easy.

My Del Rey paperbacks total about 1,000 pages, which isn’t a whole lot more than an average volume of The Wheel of Time or The Malazan Book of the Fallen. So, you can check out the adventures of Garth the overman without locking up your free reading time for the next few years. I suggest giving it a try.

Back in the eighties, Watt-Evans plotted out a fifth book, but Del Rey wasn’t interested in it and he set it aside. It seems that the author is done with this series, but one never knows…

And he was reading swords and sorcery long before he discovered Holmes.

I mentioned that ‘conflict’ is an important element in movies. Bill Martell, my favorite screen writing guru, has an excellent piece on that in today’s Script tips.

Some really great covers accompanying this article. Darrel K. Sweet wasn’t always my favorite artist, but there were times when he could really deliver.

The Public Life of Sherlock Holmes – Catching Up | Almost Holmes

[…] Then, to kick off March, I wrote about Lawrence Watt-Evan’s Lords of Dus series. These four books aren’t nearly as well known as other efforts of the time by folks like Katherine Kurtz, David Eddings and Stephen R. Donaldson. But I liked it then and I still do. […]