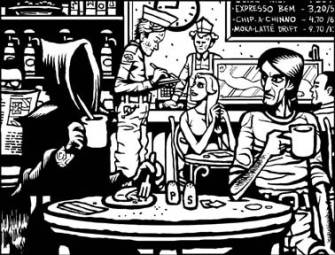 Over the weekend, Mark Shainblum pointed me towards columnist Timothy Callahan’s article in Comic Book Resources discussing the work of artist Bernie Mireault. It’s been around for a while, but I’d managed to miss it, so I appreciated the link. Here’s a snippet:

If we look around the axis of American superhero comics, at the groundbreaking Modern work produced in the mid-1980s, it’s the same four or five names that keep popping up in our conversations: Alan Moore, Frank Miller, Rick Veitch, Howard Chaykin, maybe Matt Wagner. These were the creators who changed the landscape of American superhero comics, for better or worse. They heralded the Modern.

Yet there’s one creator who doesn’t get mentioned nearly as often. A writer/artist who was combining the high Romanticism of the fantastic with the mundane life on the street as well as any of the others. A comic book creator whose visual style has rarely been duplicated… I’m talking, of course, about Bernie Mireault.

Mireault (rhymes with “Zero”) has been working continuously in the comic book industry for the past 24 years, but he gets almost none of the acclaim given to his peers… in the mid-to-late 1980s and early 1990s, Mireault produced or helped produce three essential texts of the Modern era, and it’s time those three books were given their due.

I first met Bernie in 1985, when he crashed at my home in Ottawa, Canada, while attending a local comic convention. I was impressed with him immediately — especially his groundbreaking work on the hilarious Mackenzie Queen for Matrix Comics. He’s extrememly gifted as a comedic artist, and his character design is second to none — as you can see from his marvelous panel illustrating “The Loiterer in the Lobby” by Michael Kaufmann and Mark McLaughlin for Black Gate 4 (above). I hired Bernie as an illustrator when I launched Black Gate, and he graced virtually every issue of the print magazine. I profiled him back in 2009, and Matthew David Surridge wrote a detailed review of his excellent comic The Jam last December. His other work includes Grendel (with Matt Wagner), The Blair Witch Chronicles, and Dr. Robot.