By Michael Kaufmann and Mark McLaughlin 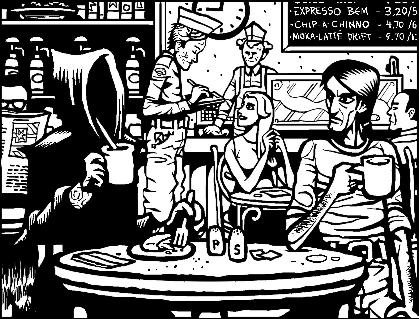 In my maddened ears still echoes the clickety-clack of frenzied digits pounding away at off-brand keyboards, and the drone of vile voices muttering strange litanies over static-ridden intercoms. When I close my eyes, I can see the furtive greenish glow of uncouth computer screens, and surely I can still smell the brain-blasting bitterness of simmering coffee-pots, whose contents were fresh back when the Earth was young. Strange are the ways of the Ancient Gods, but stranger still are the memos of hell-spawned office managers.

But let me start my story at the point most advantageous to the telling of all tales of extra-dimensional horror: the beginning. My name is Nathaniel Whereabouts, and in the Summer of 200-, I moved to the city of Arkham to attend Miskatonic University, to pursue a double major in Quasi-Religious Sociology and Quantum Metaphysics. But mine was not a rich family, and my scholarship funds began to dwindle at any astonishing rate.

One especially chill October morning, while reading the Arkham Coupon-Clipper, I happened to notice an ad that promised to augment my precarious finances:

This was followed by a local number. Yes, I needed cash — desperately. And I was a quick typist, available most evenings, well-groomed, professional, and well-versed in all matters computer-oriented. And I thought extra-dimensional devil-gods were pretty darned interesting, too. In short, I felt I was a surefire candidate for the opportunity at hand.

My call was answered before the first ring had time to finish.

“Forbidden Works. Miss Ghoorish speaking. How may I help you?” The low murmur of her voice was like the silken burble of a moonlit stream.

I introduced myself and added, “I am currently in search of employment, for my current monetary situation is worrisome to the extreme.”

“Broke, eh?” There was a faint rustling of papers. “Well, there’s plenty of work out there. I run a temp agency for a rather specific line-up of clients. Come on down to the office, we’ll hitch you up.”

“And how might I find your fine establishment?” I inquired.

“Directions… Well, let’s see…” She cleared her throat. “North of Arkham, the rolling hills echo at sunset with the languid cries of mournful whippoorwills. Follow the Snothman Turnpike through those hills, past the barren heath of which no one likes to speak. Turn left when you espy the red gleam of Mars and the mad twinkle of Antares over a forbidden barn in which an unspeakable act was committed over two-hundred and twelve years ago. Then go about a quarter of a mile, turn left at the bait shop, and look for a blue station wagon. Park next to it. Ring the melancholy doorbell of the strange dark house looming before you like an unhallowed monolith from some twisted dimension of dread.”

“I’ll be there in twenty minutes,” I whispered.

I followed her directions to the letter, and it wasn’t long before I was standing before that strange dark house, ringing that melancholy doorbell. I trembled when I read the message spelled out in a disturbing curlicue typestyle on the green plastic doormat — WELCOME, YOU FOOL.

I found it difficult to look directly at the woman who welcomed me into the vestibule. I suspected, based on my knowledge of Quantum Metaphysics, that the personage in question was skilled in an obscure form of stealth technology. I knew that such scientific premises have been applied to supersonic aircraft — but people? Who knew? It was as though her very presence warped the infrastructure of time and space, so that a glance in her direction only resulted in a glimpse of a little cherrywood table to her immediate left. I found it impossible to determine where I had to look to actually see her.

“Come into my office,” she said, and so I followed the slight creak of her footsteps into the depths of the house, past oak-framed portraits of people who must have been her family members, because I could not see them anywhere.

We entered a room filled with bizarre curios from ungodly dollar-stores. “You look like a good kid,” she said. “Clean-cut. Trim. Reserved. Love the velvet waistcoat. You should do well with my clientele.”

For the next half-hour, we discussed the terms of my employment. Her visual elusiveness began to grow on me, and I soon found it rather charming — coy, almost flirtatious.

“Let’s start you out with Piranha Health Foods,” she purred. “Piranha — yes, a good place for you to stick your toe in the water.”

Piranha Health Foods was located in an ill-famed strip mall off the Shoggoth Express. The store was part of an international chain that sold all-natural foods, homeopathic remedies, and hand-carved fetish dolls.

I began work there the next night, to help them to catch up with clerical duties after-hours. Basically, my duties included typing, bookkeeping, and preparing reports on a series of experiments being conducted in the Amazon rainforest.

My supervisor, Miss Blubb, was an obese woman with three chins, deepset green eyes, and short blonde hair highlighted a gentle sky-blue. She had an enormous belly and tree-trunk legs, yet her chubby arms and petite hands were far too small for her body, and she kept them folded tidily atop her mountainous bosom.

I had a black metal desk in a back storage room that doubled as a work area, filled with filing cabinets, bins of dried goods, and shelves of jars, bottles and boxes. Every few days, a branch office in South America would e-mail me the results of their rainforest experiments, and I would download the information, correlate various statistics, and present the results to Miss Blubb.

“These statistics related to the tikkuni vine experiments are fascinating,” I said to Miss Blubb one evening. “But I am not quite sure what they are hoping to achieve in applying the toxic juice of the berries to cell samples. One would think they were trying to encourage genetic mutation…”

Miss Blubb gave me a small smile. “The ways of research are complex. One must calibrate a far-flung assortment of theorems to arrive, ultimately, at the truth.”

“And what is the truth?” I whispered with nameless dread.

“How does one define truth?” she replied. “It is like trying to define ‘air.'”

Unfortunately, ‘def — ‘ merely provided a misspelled reference to the sort of ears my comments fell upon, for Miss Blubb had already slammed the door on her way out.

“Miss Blubb speaks very highly of you,” said Miss Ghoorish, the next time I didn’t see my temp service account manager. “If you like, I can also get you a few evening hours every now and then at Medusa Cosmetics.”

“But I don’t know anything about cosmetics,” I said. “Cosmology, yes. But not cosmetics.”

“You won’t be handling any of the make-up,” she said. “Just paperwork. Too bad you have such a good complexion — they also make flesh-tinted acne medication, and I could have arranged a discount for you. You’ll be working for Miss Vreck, a dear friend of mine. Who knows, it might lead to a permanent position. Yes, if you are interested in a solid career, you should take a look at Medusa.”

The corporate offices of Medusa Cosmetics were located on the thirteenth floor of a legend-shrouded bank building. They didn’t sell any of their beautifying wares in those offices — there they simply stored, updated and tabulated paperwork from salons worldwide.

Miss Vreck was a bone-thin woman with large, yellow eyes and cheekbones so sharply sculpted, I feared they might break through her skin if she smiled too quickly. She wore her thick black hair piled high, and her long nails were always painted bright neon-green.

One of my duties was to assist in monitoring messages sent by e-mail regarding customer complaints. I compiled and referenced the information by several categories, including the nature of the complaint and the possible side-effects of various products.

The majority of complaints were from customers who had misused their purchases, resulting in temporary irritation. Others were obviously allergic reactions that would pass with time. But some of the complaints were of a more insidious nature. For example, what could be done for the woman whose wrinkle concealer had caused gill-flaps to open up along her jawline? And were there any pat answers for the young Goth gentleman whose use of Midnight Mystery No. 7 eyeliner had resulted in transparent eyelids that actually served as optical filters, allowing him to see people’s auras?

I was worried that those cases might result in lawsuits, but Miss Vreck did not seem concerned. “Can these folks really claim damages?” she said. “Why, to my notion, both individuals were actually enhanced. Certainly neither has any cause for complaint.”

And so the days and weeks passed, well into winter. Some evenings, I put in my hours at Piranha Health Foods, and others, I tended to my duties at Medusa Cosmetics. During the day, I absorbed precious knowledge as I pursued my studies in Quasi-Religious Sociology and Quantum Metaphysics.

But during that long winter of busywork and scholarly endeavor, I began to notice subtle yet disturbing parallels between my various interests and occupations.

For example, well is it known among students of Quasi-Religious Sociology that the now-extinct K’tunga people of the Amazon used to worship a sloth-limbed, potbellied, praying-mantis-headed, web-spinning deity named C’zog-Kamog. Indeed, no meeting of any group of Quasi-Religious Sociologists is complete without an in-depth discussion of the serrated stone knives used by the high-priests of C’zog-Kamog to relieve their sacrificial victims of the burden of skin, their god’s favorite comestible.

Plus, rows of ancient symbols carved into the walls of a certain guano-streaked cave on the Yucatan peninsula clearly indicate that the god preferred to eat flesh that — to roughly translate an especially cryptic phrase — “grew like the beetle-swarms of the k’bongah tree.” Many Quasi-Religious Sociologists believe the phrase in fact refers to skin that is experiencing rampant genetic mutation.

In the course of my studies, I also chanced upon a shocking reference in a textbook by the esteemed Dr. Emil Matapathamos, suggesting that the K’tunga people, before regular sacrifices, used to smear their imprisoned victims with the juice of tikkuni berries.

I mentioned these matters to Miss Ghoorish at one of our regular meetings.

“Well, that’s all very interesting,” she said, “but what does all that have to do with the cost of sprouts in Brussels?”

“Don’t you see?” I said. “C’zog-Kamog enjoys eating the flesh of victims smeared with the juice of tikkuni berries. Piranha Health Foods is currently studying the chemical properties of that juice, which is roseate in color. In fact, the visual effect of that juice smeared on human flesh would not be unlike that of make-up.”

“You are missing the point! Medusa Cosmetics sells make-up — and sometimes, that very make-up brings about inexplicable physical changes. Or should I say, ‘mutations,’ Miss Ghoorish?”

“Nonsense,” she said, and she may very well have waved a hand dismissively, too. “You are raving like a talking parrot who has eaten a cracker covered with hallucinogenic mold. What utter poppycock!”

“Well then, cock your ears at the statement about to pop from my mouth!” I exclaimed. “I did a little digging … a little rummaging around in the malodorous bottoms of certain long-forgotten filing cabinets … and I learned this mind-reeling, little-known fact: Piranha Health Foods and Medusa Cosmetics are both owned by a corporation called SHATROCK Research. The very fact that SHATROCK is spelled in all capital letters has me aquiver with sinew-snapping terror.”

“Then you scare easily. You simply must abandon this ridiculous line of inquiry. No good can come of probing so deeply down such dark, twisted passages.”

I looked her straight in the supposed area of her eyes. “Be that as it may — but probe I must.”

The complete version of “The Loiterer in the Lobby” appears in Black Gate 4.