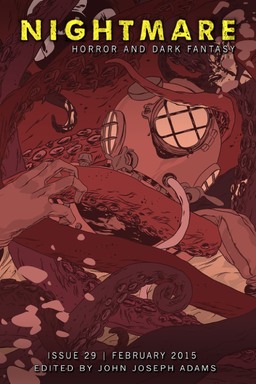 The February 2015 issue of Nightmare Magazine is now available. (Truthfully, issue 30 will be on sale any day now too, but I’ll get to that later.)

Nightmare is the sister publication of the highly-regarded science fiction and fantasy magazine Lightspeed. It’s an online magazine of horror and dark fantasy, with a broad focus — editor John Joseph Adams promises you’ll find all kinds of horror within, from zombie stories and haunted house tales to visceral psychological horror.

This issue has two pieces of original fiction:

“The Garden” by Karen Munro
“Descent” by and Carmen Maria Machado

As well as two reprints:

There’s also the latest installment of their column on horror, “The H Word,” plus author spotlights, a showcase on the cover artist, and an interview with award-winning author Chuck Palahniuk.

This month’s editorial from John Joseph Adams includes updates on the spectacularly successful Queers Destroy Science Fiction! Kickstarter campaign, which reached over 1,000% of its goal, as well as news on Adams new anthology Wastelands 2, the sequel to his bestselling Wastelands. Read the complete editorial online here.

Nightmare is edited by John Joseph Adams, editor of Dead Man’s Hand, The Mad Scientist’s Guide to World Domination, Epic, Wastelands, the upcoming The Best American Science Fiction & Fantasy, and many other fine anthologies. The mighty Patty Templeton interviewed him for us here. He has been nominated for the Hugo Award 8 times.

This is the 29th issue of Nightmare. Subscriptions are available for just $1.99 per issue, single issues are available in multiple digital formats for $2.99. Purchase copies and sample free content at the website.

We last covered Nightmare with the January 2015 issue.

The cover is cool and appeals to my inner ape. I like the deep sea scary stories with tentacles and things that slither beneath the sea. I hope it is a story in the magazine and not just a tease lifting my hopes up. I realize that covers are to establish the mood of the magazine.

John, I’m glad you illustrate in your blogs what makes a good editor.

I was buying Nightmare for the first year it came out. At least during that time, the covers had nothing to do with any story within. However, there was always a section where the cover artist had several more pages of his or her art. Most of these are available for free on their website. They are definitely worth a look.

> John, I’m glad you illustrate in your blogs what makes a good editor.

Thanks Ape! I think I just miss being a fiction editor. 🙂

I’m pretty sure you’re right. The editors like to choose covers for NIGHTMARE that tell a story, and this is one of them.

How many stories does a magazine get in its slush pile on average?

> How many stories does a magazine get in its slush pile on average?

Ape – that depends on the magazine. But I used to get about 300 per month for the print version of Black Gate. I understand Asimov’s gets about 800.