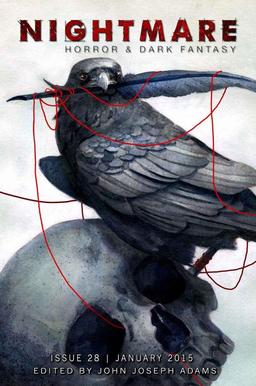 The January 2015 issue of Nightmare Magazine is now available.

Nightmare is the sister publication to the highly-regarded science fiction and fantasy magazine Lightspeed. It’s an online magazine of horror and dark fantasy, with a broad focus — editor John Joseph Adams promises you’ll find all kinds of horror within, from zombie stories and haunted house tales to visceral psychological horror. Fiction contents this month are:

“Returned” by Kat Howard
“The Trampling” by Christopher Barzak

In the non-fiction section, Stoker award-winning writer Lisa Morton explores the state of female protagonists in horror, and there’s an interview with legendary Canadian filmmaker and novelist David Cronenberg. Plus author spotlights and a showcase on cover artist Tran Nguyen.

Nightmare is edited by John Joseph Adams, editor of Dead Man’s Hand, The Mad Scientist’s Guide to World Domination, Epic, Wastelands, and many other fine anthologies. The mighty Patty Templeton interviewed him for us here. He has been nominated for the Hugo Award 8 times.

Most recently, Adams has become the editor of the new Year’s Best series, The Best American Science Fiction & Fantasy. The first volume will be published by Houghton Mifflin Harcourt this October.

This is the 28th issue of Nightmare. Subscriptions are available for just $1.99 per issue, single issues are available in multiple digital formats for $2.99. Purchase copies and sample free content at the website.