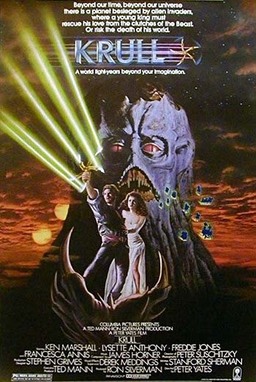 Over at Tor.com, Leah Schnelbach is having entirely too much fun ranking the major fantasy films of the 1980s. Here she is on Krull, which she ranks an abysmal 17 (out of 18):

What this movie’s actually about is the Glaive, but it only gets like ten minutes of screentime. This film was developed as a starring vehicle for the Glaive, the five-bladed boomerang-like weapon wielded by the hero. Unfortunately, the Glaive’s career never really took off: After one too many brawls at the Viper Room, and one two many sunrises spent waking up on the lawns of strangers, the weapon checked itself into a much-needed stint at Hazelden. Deciding that the Hollywood lifestyle just wasn’t enough to fill the void in its soul, the Glaive finally retired to Oregon, where it raises alpacas, and is said to be very happy.

I’m pretty sure her article is a lot more fun than watching Krull all over again.

If there was a decade of fantasy film tailor-made for impassioned fan debate, it’s the 80s. It’s ten years of classics, and stinkers, and classic stinkers, like The Beastmaster, Dragonslayer, Highlander, and many more. Schnelbach is hilarious, and even Excalibur doesn’t escape her snarky commentary (“Have you heard of an actor from Ireland or England? Yeah, he’s in this movie.”)

The article isn’t perfect (um, where’s the timeless S&S classic The Sword & the Sorcerer?) But she does give real movie fans the true gift of being dead wrong on several occasions (Master of the Universe is better than Highlander? Willow and Clash of the Titans both rank above Excalibur??), and we all know movie fans cherish nothing as much as a good debate.

Read the complete article at Tor.com, and leave your impassioned defense of Labyrinth or the original version of Conan the Barbarian in the comments.

I’m going to leave my impassioned defense right here, John. Willow and Clash might not be better than Excalibur, but they’re certainly less depressing. As for Krull, it’s about the Glaive and an invading alien overlord with a disappearing castle. At least, it was for me. 😀

First: DRAGONSLAYER was far, far from being a “stinker”

Second: EXCALIBUR is a classic, and widely acknowledged as one.

Third: All of this bullshit is entirely subjective. Rankings are worthless. The only ranks that count are the ones you set yourself.

I would rather be chained to a galley oar and lashed at ten minute intervals than sit through Krull, Ladyhawke, or Willow again. On the other hand, I watched Dragonslayer again not long ago and quite enjoyed it, and have fond memories of Excalibur, though I haven’t seen it in years. Now I know what I’ll be doing on Saturday…

I’m with you, John, on those two movies. Dragonslayer is one of the few fantasy films that not only doesn’t stink, but is a great, very dark-toned work. Excalibur is pretty sloppy plot wise, but who cares when it hits so many of the important parts of the legend perfectly?

I do admit to having a soft spot for Krull. I just rewatched it and it’s a lot of fun.

OK, Krull was the definitive ‘bad’ fantasy movie of the day – but Beastmaster? Highlander? Willow? To call these three films ‘classic stinkers’ seems an unduly harsh assessment to me.

* and yeah, I know Ron Howard directed Willow. I still think it was a decent enough effort.

The original Tor posting consists of poor rankings and is not nearly as clever as it is trying to be.

I should step in and clarify that I had no intention of classifying The Beastmaster, Dragonslayer, and Highlander all as “classic stinkers,” but rather that they were part of “ten years of classics, and stinkers, and classic stinkers.”

It was a poorly constructed sentence, and not even the Oxford comma saved me.

John R. Fultz: “All of this bullshit is entirely subjective. Rankings are worthless. The only ranks that count are the ones you set yourself.”

Please don’t hide your feelings. Tell us what you really think. 🙂

Didn’t mean to sound quite so earnest, John – I’m not sure if there’s any such thing as a ‘good’ 80’s fantasy movie, tbh!

Aw, man, I too must admit that Krull holds a special place in my heart — not too long ago I got it on DVD, although I haven’t brought myself to re-watch it yet. But when I was around 11, 12 years old, I watched that show again and again on cable. It resides fondly in my memory somewhere alongside the ’80s Flash Gordon (who — aaww-ahhh-aww — saved every one of us).

Labyrinth is one of my favorite films, and I routinely listen to the soundtrack CD when I’m driving around in my minivan. Yes, I am a child of the ’80s.

> It resides fondly in my memory somewhere alongside the ’80s Flash Gordon
> (who — aaww-ahhh-aww — saved every one of us).

Thanks for that — I needed that LOL this morning!

Dragonslayer is a perfect film. It perfectly realizes everything it’s trying to do, which is far more than anyone realizes until the film unfolds itself before them. One of the best films of the 80s, regardless of genre.

The Neverending Story always felt, to me anyway, like it was trying too hard. I could never disappear into the dream of the story, because the film kept doing cringeworthy things, and then I would notice I was cringing on its behalf. I don’t think I’ve ever managed to get through it in one sitting.

So, yeah, subjectivity and all that.