Before he became a regular artist for Black Gate, Bernie Mireault was already something of a Renaissance man in the comics industry. He’s been a writer, artist, letterer, and highly acclaimed colorist, and worked with Matt Wagner (Grendel), Joe Matt, Mike Allred, and many others.  His comics include Dr. Robot, Bug-eyed Monster, The Blair Witch Chronicles, and his masterpiece, The Jam.

Our first meeting (that we know of) was in 1985, when Bernie  crashed at my home in Ottawa, Canada. I was living with my parents while I studied at the University of Ottawa, and Bernie and his fellow creators with Montreal-based Matrix Comics were attending a local comics con. Bernie had just published the first issue of Mackenzie Queen, a marvelous piece of satirical horror featuring an exiled demon with a taste for dripping meat, who learns to be satisfied with Corn Flakes (“at least they drip.”)  It was one of the first comics to make me laugh out loud. I’d been corresponding with Mark Shainblum at Matrix for months, and when I learned he was coming to town, I graciously offered my parent’s home as crash space (pretty sure I neglected to check with my parents first, which is part of what made it so gracious).  Mark brought Gabriel Morrissette and Bernie Mireault, and the rest is history. 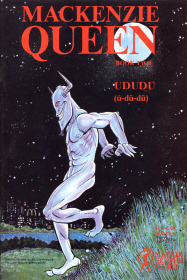 I say “first meeting that we know of” because Bernie and I were born in the exact same (and very small) place  — a Canadian Air Force base in Marville, France — only a few years apart in the early 60s.  Did we pass briefly as toddlers in the officer’s mess, and maybe compare our love for cartoons and comics while our fathers saluted each other over trays of french bread and beans?  Probably not.  But hey, man.  It’s possible.

We lost touch for a few years when I moved to the US to finish grad school (and meet a girl from California and get married, but that’s another story).  But I followed Bernie’s career closely.  It wasn’t hard — he was all over the place, from Wonder Woman to Mr. Monster to Tales of the Batman.  He even showed up — along with Matt Wagner — in Joe Matt’s autobiographical classic, Peep Show, as a minor character named only “Bernie.”  But I recognized him immediately. Who wouldn’t?

But enough of trying to describe how cool Bernie is.  To understand, you need to experience his work.  And now you can!

“I’ve been posting some “new” work [re-coloring old black and white strips] on CO2 Comics.com. It’s kind of like the reincarnation of Comico. One is a Flash-made interactive narrative called The Jam Demo. It’s my ambition to transpose a short Jam story into a hyper-limited animation thingie with sound and original music. I haven’t had the time to complete it, but the first bunch of scenes make a great ad for the work in general, and I’m proud of it.”

And he should be.  More than a decade after it first appeared, The Jam is still revered as one of the great independent comics, an homage to superheroes and an examination of the true power of a secret identity (and a girlfriend who can sew).  Check out the new animated version of The Jam‘s first appearance here.