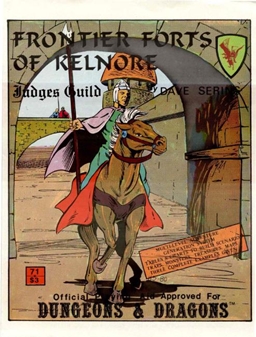 When I began playing Dungeons and Dragons in the late seventies, I was a Judges Guild fan. My friend, who had more money, would buy shiny TSR modules. And I would get the cheaper-covered Judges Guild products. F’Dech Fo’s Tomb, Ravenscrag, Inferno (with a real cover), City State of the World Emperor, Wraith Overlord… I loved reading those things.

Frontier Forts of Kelnore guarded the border of my kingdom of Troya, ruled by the great warrior, Astyannax (I got more creative over the years). I even subscribed to Pegasus magazine, right up to the day it was discontinued.

Now, I liked those Judges Guild modules and supplements, but looking back, many did not age well (though a few did). Gaming has changed a lot over the years and reading them is kind of like watching an early talkie from the thirties. They’re out of place.

Having said that, they can still be interesting. I recently considered updating Glory Hole Dwarven Mine to work with Forge of Fury as a Pathfinder dwarven adventure. However, converting those old AD&D/Universal modules would take a LOT of work. 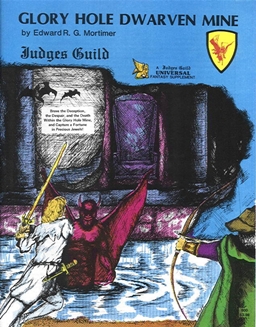 Fortunately, some of those old JG products were converted to third edition. Greg Geilman, author of an old favorite, Kelandor’s Gold, helmed a conversion of one of the all-time great modules, The Dark Tower. This was done by Goodman Games, who would also update Citadel of Fire and Thieves of Fortress Badabaskor.

A few years later, Necromancer Games would convert the campaign world, Wilderlands of High Fantasy, as well as City State of the Invincible Overlord and Caverns of Thracia, to third edition. Those were three of the most popular Judges Guild products. Both Goodman and Necromancer did fine jobs with these conversions: I think I have all but one.

A more current effort was the 2014 Kickstarter campaign for a Pathfinder/JG Universal version of City State of the Invincible Overlord, with some additional components. I backed this, and am expecting it by Christmas.

All of which leads us to a 2014 Gen Con announcement. Wizard of the Coast’s re-issue of classic Dungeons and Dragons sourcebooks in quality, hardbound editions was a smash success. So Judges Guild and Goodman Games are joining forces to issue deluxe, over-sized hardback editions of original Judges Guild products, along with the pages from The Judges Guild Journal that originally accompanied them.

They will be digitally restored and included at original size, which for the Journal pages, is actually larger than 11” x 17.”

The first volume will include Tegel Manor, Thieves of Fortress Badabaskor, and Citadel of Fire, as well as installments L, P, and S of the Judges Guild Journal. 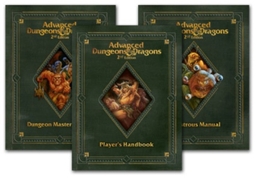 I have serious doubts that this undertaking will make much of an impact. The first and second edition Player’s Handbook are foundational books. Third Edition was massively popular among many current players.

The nostalgia appeal of the “premium” lines was huge. I’m a Judges Guild fan, but the line doesn’t have the same appeal. An expensive hardbound book including Tegel Manor in its original gaming system doesn’t strike me as something gamers will clamor for.

Now, I’d be interested in a Tegel Manor for Pathfinder (or maybe Fifth Edition or Dungeon Crawl Classics): Something I could play. But this seems like a costly curio. We’ll see.

The Dark Tower was probably the first ‘classic’ non-TSR module.

It’s got a Hyborian-era feel to it.

The Goodman Games updating for third edition is a fun read.

I picked up a lot of those on eBay after reading rave after rave about them. Found out that I’d played through GM rewrites of some of them and even had a character living in Tegel Manor. However, reading through the originals, I was unimpressed. Disappointed even (although I recouped my money selling them).

I’m nostalgic for the good ol’ days, but it was the GM and the players who made them good. I hope their product does well, but I won’t be buying.

@Jeff – At the time, the appeal was that they were basically the only alternative to TSR modules (which were also very much a mixed bag).

And Wilderlands, City State and World Emperor didn’t require you to create your own settings, which was great at the time.

But as I said, many didn’t age well. And comparing them to today’s detailed modules isn’t fair. Their strength is evoking nostalgia.

Of course ‘contemporary’ isn’t always a selling point for some of us.

Regarding the City State of the Invincible Overlord kickstarter, I guess I meant I was expecting it by Christmas of 2015. And at that, I’m more hoping than expecting.

So, this is finally happening. Good to see it’s Goodman Games. As Judges Guild is closing in on a YEAR AND A HALF overdue on its City State of the Invincible Overlord KS. I wouldn’t pledge another dime to them.

There are some vintage Judges Guild Game Supplements and Magazines for sale here!
https://forum.rpg.net/showthread.php?825050-for-lower-prices!-Vintage-Judges-Guild-Game-Supplements-and-Magazines-w-new-detailed-listing