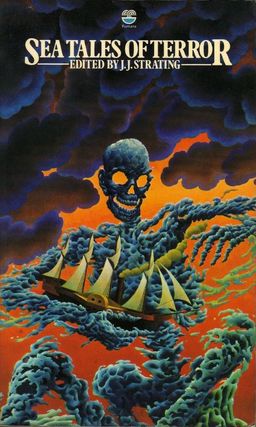 When you’ve been collecting paperbacks as long as I have, there aren’t a lot of discoveries left that really get you excited. Sure, there are still the occasional finds in a good used bookstore, or that opportunity to replace a lost book at a great price. But nothing like those unexpected discoveries you made when you first started collecting. The ones that made your pupils go big, and made you think, “I need this book right now.”

Of course, there are exceptions.

A few weeks ago, I spotted Sea Tales of Terror, a 1974 paperback from British publisher Fontana, on eBay. It was the first copy I’d ever laid eyes on. And my eyeballs got big, and I thought “I need this book right now.”

Mostly it was the cover, I think. Painted by Justin Todd, it shows a skeletal figure, made entirely of salt water and sea foam, clutching a full-masted schooner, against an angry red sky. That cover promised adventure and nights of delightful reading curled up in my big green chair.

With a little determination, I won the auction. (Truthfully, it wasn’t hard. The bidding fizzled above five bucks and I got it for less than seven. Vintage paperbacks — there just aren’t that many that cost as much as a new paperback.)

We’ve mentioned Fontana’s Tales of Terror anthologies before, but I really had no idea there were so many. I count a total of ten, although that’s not a firm number. Earlier this year, I wrote about Gaslight Tales of Terror, edited by R. Chetwynd-Hayes, who edited several others, including Welsh Tales of Terror (1973), and Tales of Terror from Outer Space (1975). J.J. Strating, editor of this volume, also produced European Tales of Terror (1968) and Oriental Tales Of Terror (1971). Clearly, I need to do some homework and report back on what I find.

One thing I enjoy about the Fontana books is that they mine more than just the pulps. Sea Tales of Terror includes two stories from the pulps (John Campbell’s Unknown and Adventure), but it also includes fiction from Edgar Allan Poe, Arthur Conan Doyle, H.P. Lovecraft, and others. It also includes six works original to this volume, including new stories from by R. Chetwynd-Hayes and Tom Hopkinson.

Here’s the blurb on the back of the book:

Sea Tales of Terror was edited by J.J. Strating and published by Fontana in August, 1974. It is 188 pages, priced at 35 p in the UK. It has never been reprinted and there is no digital edition. The cover is by Justin Todd. I bought a copy in excellent shape for $6.20 on eBay.

I must not be using eBay right. How do you find these things? (Serious question.)

It’s toughest to find the books that you don’t know exist. 🙂

The surest way I know on eBay is to use the “View seller’s other items” link whenever I stumble on something interesting. Often a collector will be selling a number of books, and you can browse through them that way.

I have a number of Followed Searches on eBay (any time you search for something on eBay, you have the option to save that search, and eBay will e-mail you when it gets fresh hits.) That’s a very useful way to find obscure books as soon as they’re posted as well.

Fletcher — isn’t it? It certainly grabbed my attention.