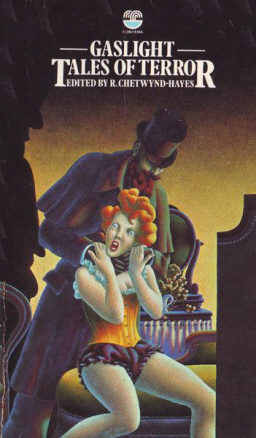 I don’t know much about British ghost story writer R. Chetwynd-Hayes. According to his entry at the Internet Speculative Fiction Database, he produced ten novels and two dozen short story collections between 1959 and 2001, the year he died. That’s a heck of a lot of ghost stories.

The last in the series was Gaslight Tales of Terror (1976), a marvelous mix of original and classic spooky tales. Here’s R., from his introduction:

Here are fourteen Gaslight Tales of Terror, including one or two oil lamps and a few guttering candles. With one exception all the stories have either a Victorian or Edwardian background… But although — if newspaper reports are to be believed — ghosts and other horrors have not been exorcised by the advent of space travel and colour television, one feels they were more at home during the reign of Queen Victoria. And I do mean at home: in pea-souper fogs, on gloomy streets where the lamp-lighter with his long pole trudged wearily from post to post, and a potential Jack the Ripper lurked in dark alleyways.

Eight tales are original to this volume, including contributions from J. Sheridan Le Fanu, Roger Malisson, Dorothy K. Haynes, Rosemary Timperley, and a vampire tale from Chetwynd-Hayes himself.

Introduction by R. Chetwynd-Hayes
“The Last Victim” by Roger Malisson
“A Tale of a Gas-light Ghost” by Anonymous
“The Pauper’s Feast” by Sydney J. Bounds
“Number 13” by M. R. James (reprint, from 1904)
“Up, Like a Good Girl!” by Dorothy K. Haynes
“An Authentic Narrative of a Haunted House” by Joseph Sheridan Le Fanu
“The Glass Staircase” by R. Thurston Hopkins (reprint,1956)
“The Maid, the Madman and the Knife” by Rosemary Timperley
“What Was It?” by Fitz-James O’Brien (reprint,1859)
“The Veritable Verasco” by James Jauncey
“The Silver Highway” by Harold Lawlor (reprint,1946)
“Mrs. Raeburn’s Waxwork” by Lady Eleanor Smith (reprint,1931)
“The Phantom of the Lake” by Edmund Mitchell (reprint, 1886)
“Keep the Gaslight Burning” by R. Chetwynd-Hayes

Gaslight Tales of Terror was published in the UK in 1976 by Fontana. It is 192 pages in paperback, originally priced at $1.50.

[…] were so many. I count a total of ten, although that’s not a firm number. Earlier this year I wrote about Gaslight Tales of Terror, edited by R. Chetwynd-Hayes, who edited several others, including Welsh […]

[…] of the Armada Monster Book and several of the classic Fontana Tales of Terror volumes. We featured Gaslight Tales of Terror, his 1976 anthology and the last one of the series, as a Vintage Treasure back in […]