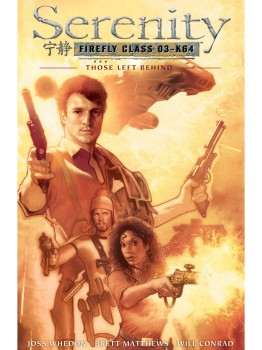 Fan passion for more Firefly stories led to the rare (unprecedented?) move of turning a failed television series into a feature length film, in the form of 2005 film Serenity (Amazon). As an attempt to bridge the narrative gap between the end of the series and the start of the film, Joss Whedon collaborated with Dark Horse comics to produce the three-issue comic limited series Serenity: Those Left Behind (Amazon). This review is based on the original hardcover collection of the series, published in 2007. (They’ve since published a 2nd edition.)

Here are the major jumps between the end of Firefly and the beginning of Serenity, which the comic series seeks to explain:

Serenity: Those Left Behind covers all three of these elements, and also brings back a villain from the television series who would have been recurring had it continued. I won’t ruin it by saying which one. As a hint, though, it’s someone who feels that they were wronged in their last interaction with Malcolm Reynolds, so that should narrow it down. This individual joins forces with the blue-handed operatives to move against the folks on Serenity. In addition to the mysterious recurring villain, there’s also a nice cameo by Mal’s contact Badger, who assigns them a job that doesn’t go exactly as intended. (Or at least not as intended by Mal and the crew.)

One of my favorite characters from the series was Shepherd Book, and his role in the film is important, but also sadly brief. He gets some real shining moments in the comic book, particularly as he explains to Mal that he’s leaving the ship. Book crosses a line and, in the closing section of the book, goes to talk to Mal about it. Here’s the high note of that particular exchange:

Book: Which is exactly why I need to be away from you. Because sooner or later, it won’t matter to me, either.

The series ends with all the pieces in place for the start of the film. For a fan of the series, this is a great element of the Firefly universe. The television series ended with Inara deciding to leave and Book was never intending to stick around forever, so having the canonical explanation of what finally drove them away isn’t strictly necessary, but that mixed together with the other elements – the re-introduction of an old villain, the resolution of what happened to the other agents seeking River – fills in exactly the gaps that fans like to see resolved in expanded universe storylines.

In addition to the comics themselves, the collected volume includes the various alternate covers from the original comics, an introduction by series and film star Nathan Fillion, an essay by Joss Whedon called “A Brief History of the Universe, Circa 2516 A.D.,” and a bunch of great concept artwork from the film.

[…] this is actually the fourth collection of Serenity comics. I previously reviewed the Serenity: Those Left Behind comic story, which was published before the release of the film Serenity. Two additional stories […]