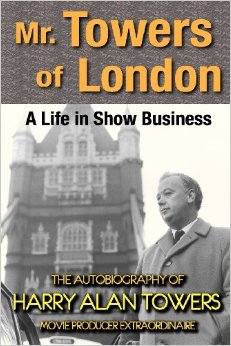 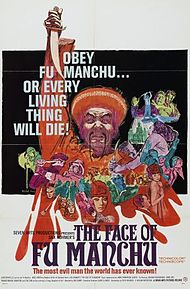 My main interest is, of course, in Towers’s role in writing and producing eight films based on the works of Sax Rohmer. The first of which, The Face of Fu Manchu (1965) gets my vote as the finest screen adaptation of Rohmer’s work. Now it is worth noting that the rights obtained were for characters only, as no adaptations of any of Rohmer’s novels or stories were attempted. Christopher Lee and Nigel Green gave the very best screen performances as Fu Manchu and Nayland Smith. Don Sharp’s direction and Towers’s original script were both taut and exciting. Sadly, the rest of the series failed to meet the same high standard. 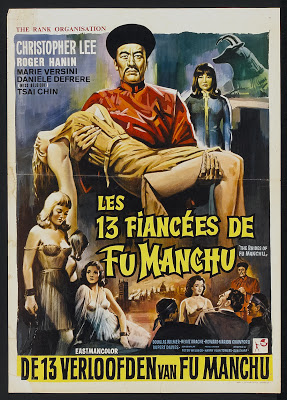 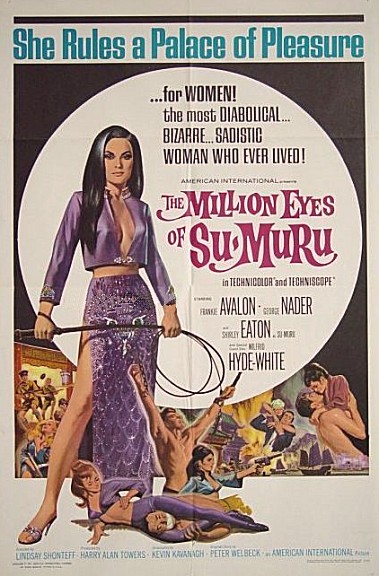 The Brides of Fu Manchu (1966) is the best of what came after. Douglas Wilmer, despite being an excellent actor, is miscast as Smith in this film and its immediate sequel. The story isn’t as good, nor is Don Sharp’s direction and the so-called brides (alleged by Warner Bros. publicity to be beauty contest winners, but I have my doubts about this fact) aren’t much of a selling point.

The law of diminishing returns really kicked in with the two Shaw Brothers co-productions made in Hong Kong, The Vengeance of Fu Manchu and The Million Eyes of Sumuru, both released in 1967. It’s hard to say which director fared worse: Jeremy Summers or Lindsay Shonteff. The former has Douglas Wilmer on hand for effortless class, while the latter has a woefully miscast Frankie Avalon. Christopher Lee and Shirley Eaton as the respective titular villains deserved far better material, a frequent problem for Lee at Hammer Films as well.

Of course, matters only got worse with the arrival of cult director Jess Franco for a pair of South American-filmed sequels, The Blood of Fu Manchu and The Seven Secrets of Sumuru, both released in 1968. The former abandons the family-friendly approach for an awkward attempt to combine Fu Manchu with a spaghetti western format and heavy doses of sex and a bit of nudity tossed into the mix. The latter sees Franco dive deep into expanding Lindsay Shonteff’s campy lesbian fantasy into something approaching Roger Vadim’s Barbarella (1968) and Philip Kaufman’s Fearless Frank (1967). The film is a full-fledged pornographic comic book with garish visuals and gobs of Vaseline-smeared nipples. If the dregs of sixties exploitation fare isn’t your cup of tea (and it certainly wasn’t for Rohmer’s widow, who was responsible for Sumuru’s name being changed to Sumitra in English-language prints in an attempt to distance herself from the soft-core comic book fantasy), you should best avoid.

Towers and Franco then teamed for The Castle of Fu Manchu (1969), which was shot in Istanbul. The remarkable locations were wasted, sadly, while Franco padded the running time by reusing a lengthy sequence from The Brides of Fu Manchu and adding stock footage from Roy Ward Baker’s A Night to Remember (1958). Towers’s script for this final effort for the sixties has elements that suggest it might have been his best since The Face of Fu Manchu, but the script was either in dire need of a further draft or Franco wandered too far from the page in producing this mess.

Towers himself returned to the material with Sumuru (2003), an unfortunate mess on the level of the worst SyFy Channel original productions. Alexandra Kamp’s Sumuru has nothing at all to do with Shirley Eaton’s portrayals, let alone Sax Rohmer’s fiction. The resulting film plays more like a cheap Planet of the Apes knockoff where the talking apes are replaced with supermodels. Yes, it really is that bad. The South African locations are, unfortunately, indistinguishable from the rock quarry as alien planet location work from countless sci-fi film and TV productions from the 1960s to the present.

Harry Alan Towers never gave up on Fu Manchu. A new film was in the planning for over forty years. His widow, Maria Towers (formerly frequent co-star of his films under the name of Maria Rohm) still holds the film and TV rights to Sax Rohmer’s works. There have been several false starts, but the legacy of Sax Rohmer and Harry Alan Towers may yet see the Devil Doctor returning to the screen. The world will hear from them again, as Christopher Lee would promise at the end of each film.

And of course, Towers would work again with Lee in the early nineties on two Sherlock Holmes films worth a watch.

William Patrick has done it again. A well-researched and well-written article about the latter-day films based on Rohmer’s characters rather than his novels or stories.