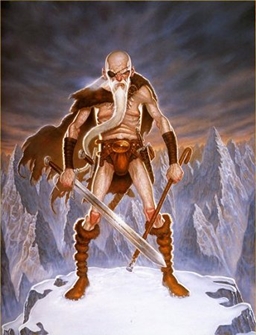 I am an unabashed fan of Terry Pratchett’s Discworld books. Along with a lot of Carl Hiassen’s work, they are the only reads that cause me to laugh out loud. Unseen Academicals was the first Discworld book that I wasn’t really happy with when I finished it; which isn’t too bad considering it was the thirty-third in the series for me.

Though I have a very fundamental difference with Pratchett’s basic worldview, I think he is an absolutely brilliant satirist. Discworld isn’t nearly as well known generally as The Hitchhiker’s Guides to the Galaxy books, but I tell folks that if you like Douglas Adams, you should like Terry Pratchett.

Genghiz Cohen, better known as Cohen the Barbarian, appears in a few novels. He is Discworld’s greatest warrior, though now he is an old man in his late eighties or nineties, and he leads a band of senior citizen barbarians known as the Silver Horde.

Cohen/Conan. The Silver Horde/The Golden Horde. See? Get it? Discworld is full of this stuff.

Cohen is a skinny old man with a long white beard, a patch over one eye and a dirty loincloth. He has a set of dentures made from Troll teeth, which are pretty much the only things he has left from a wild life.

Cohen is a fun character because he (in Pratchett’s over-humorous way) shows us what Robert E. Howard’s Conan would have been like in his golden years. The world is a bit more civilized and Cohen has to figure out where he fits in. Sam Peckinpah (The Wild Bunch, Ride the High Country) was a great movie director. He frequently used the theme of unchanging men in a changing world and the struggle that ensues. Pratchett uses Cohen as a symbol of that paradigm.

After taking over an empire, Cohen and the Silver Horde get bored and decide to return fire to the Gods: in their own fashion. That story is the subject of a sort of graphic novel (illustrated mini-novella?), The Last Hero, which will be the subject of an upcoming post.

Cohen shines in the short story, “Troll Bridge.” A mere nine and-a-half pages long, it shows what a good writer Pratchett (currently battling Alzheimer’s) has been.

It takes place on a bitterly cold day:

It was an old horse. It was an old rider. The horse looked like a shrink-wrapped toast rack; the man looked as though the only reason he wasn’t falling off was because he couldn’t muster the energy. Despite the bitterly cold wind, he was wearing nothing but a tiny leather kilt and a dirty bandage on one knee.

Cohen has come to defeat a bridge troll in single combat because decades ago, his father told him that he should. But Cohen finds a troll who is thrilled to meet the legendary fighter. Micah introduces his wife and kids. Poor Micah: his three troll brothers-in-law have found success as a merchant, a lumber mill owner and a bridge toll taker. His wife nags him constantly about their life, living under a leaky old bridge that nobody crosses anymore. He is proud of the job his father held before him and that he will pass on to his son. An unchanging troll in changing times.

Instead of a deadly combat, Cohen and Micah reminisce about how it used to be in the old days. Now, it’s all so civilized. Cohen laments that there aren’t forests filled with giant spiders or goblins attacking all over the place. This short story tells us what we learn about Cohen in the novels: his time has passed and he doesn’t know what to do.

This is an exchange with his talking horse (formerly owned by a wizard):

“You must have plenty of treasure stashed away…”

“No treasure. Spent it all. Drank it all. Gave it  all away. Lost it.”

“You should have saved some for your old age.” 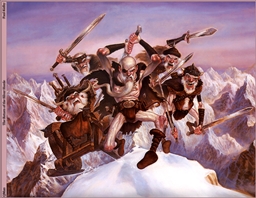 Cohen’s interchanges with the horse are full of the social and cultural commentary that makes Pratchett the Voltaire of fantasy.

Rather than robbing the troll of treasure that it doesn’t have, Cohen actually gives Micah all of his own gold! But he does get the addresses of the three brothers-in-law and Pratchett leads us to believe that Cohen is going to search them out for combat. And he’s unlikely to show compassion to them!

Cohen is a minor figure in the large cast of characters Pratchett has assembled over the course of the Discworld series. But he is a valuable one. Good, meaningful short stories are hard to write. Lawrence Block and Ed McBain are two of the best. Pratchett, in less than ten pages, shows what a fine writer he is. And we find a bit of sympathy in our hearts for Cohen the Barbarian.

Various books in the series feature recurring characters and are best read in order, but for the most part, you can just grab a book and go (though I recommend the City Watch/Sam Vimes stories be read in order).

Have the Discworld short stories ever been collected in a single volume? I know there are gems out there, but hunting them down can be problematic.

“Troll Bridge” is available in the Oxford Book Of Fantasy Stories. Not sure about where else it might appear. Oxford Book is well worth it, IMHO.

OK, to answer my own question:

Coming in March, at least in the US — it looks like it’s been out for a couple of years in the UK.

I don’t think all of the short stories have been collected. But some seem to be in this upcoming ebook.

“Cohen is a fun character because he (in Pratchett’s over-humorous way) shows us what Robert E. Howard’s Conan would have been like in his golden years.”

I have the feeling the only “Conan” both the article writer, and Pratchett, ever read was the Marvel “Savage Sword of Conan”. Now that Conan, yeah – if a “Civilized” disease didn’t get him first, or 1000 Paternity suits/revenge posses from women’s families… That was because “The Show Must Go On!” Marvel kept extending his adventures endlessly and Coz “King Conan” was too boring and intellectual to the mass audience they had to keep him a squandering wencher who couldn’t stay in one place too long.

Now, as a kid I loved every issue of Savage Sword of Conan, even have kept or re-bought some of the best to keep for the years. I, too, am working on some fun parody of some of the aspects of that.

I love “Groo” for instance, that’s a good parody of SW&SC. But in such a characterization meant to be Conan I detect the P.C. Hydra with heads of “Deconstruction” and “Base Mockery”.

I attended Torcon II in 1973 and Discon II in 1974, and at one of those cons, in the Masquerade procession, a very skinny young man walked on stage wearing an animal fur slung across his body, and a broad-brimmed black hat on his head, from which depended several braids of hair in the style worn by Hasidic Jews. He billed himself as “Cohen the Barbarian,” and he garnered for himself a lot of laughter and applause for his cleverness and originality. I wish I’d taken his picture.

[…] Cohen the Barbarian – A look at Terry Pratchett’s Conan satire. […]

And Alzheimer’s claims a great author. Terry Pratchett has passed away.
http://www.bbc.com/news/entertainment-arts-31858156

[…] the police force of Ankh-Morpork, the city-state that serves as the primary locale of the series. I just wrote a Pratchett post back in […]

Black Gate » Blog Archive » The Public Life of Sherlock Holmes: After the King

[…] in January, I wrote a post on Terry Pratchett’s Cohen the Barbarian. It was primarily based on the short story “The […]