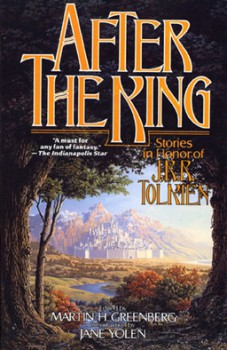 Back in January, I wrote a post on Terry Pratchett’s Cohen the Barbarian. It was primarily based on the short story “The Troll’s Bridge,” which was included in the anthology, After the King. That anthology was subtitled, ‘Stories in Honor of J.R.R. Tolkien.’

It included tales by nineteen fantasy and sci-fi authors, ostensibly all told in the style of Tolkien. The more cynical among us might view this as a cheap way to cash in on the Tolkien name (back in 1992, pre Game of Thrones, et al, Tokien still had a bigger grasp on fantasy publishing).

But not so much. The stories in this collection don’t bring to mind Michael Moorcock, Steven Erickson, Fritz Lieber or Robert E. Howard. My idea of a dragon hunt looks a lot more like a Dungeons and Dragons game than Patricia A. McKillip’s “The Fellowship of the Dragon.” Elizabeth Scarborough, Andre Norton and Jane Yolen don’t bring to mind Glen Cook. The stories in this collection do have more of a Tolkien, mythic, “pastoral” feel.

With the possible exception of Terry Brooks’ The Sword of Shanarra (which is the subject of an upcoming post by Fletcher Vrendenburgh), Dennis L. McKiernan’s Mithgar stories are as close to Tolkien pastiches as we’re likely to get this side of a novel commissioned by the Estate. He’s present with “The Halfling House.” I recently re-read his first Mithgar work, The Silver Call (written as one novel but issued as two books) and it’s as Tolkien as it gets (more on that in an upcoming Mithgar post).

An interesting story in this collection is Stephen R. Donaldson’s “Reave the Just.” It falls somewhere between his famous Thomas Covenant stories and the two-book Mordant’s Need tale.

But the purpose of this post is to talk a bit about Charles de Lint’s story, “The Conjure Man.” While he’s been quite prolific and won a World Fantasy Award, I’ve not read any thing else by him. And I don’t generally have much use for ‘new age-ish’ stuff. But this story stuck with me and I decided to re-visit it for a post. 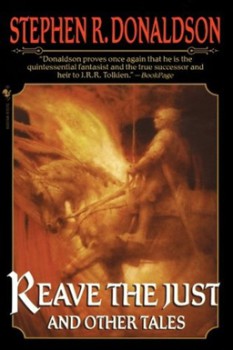 Wendy St. James is a poet who works as a waitress. John Windle is a local homeless-ish, colorfully dressed character that rides his bike around town with a ginger dog in the front basket. Really: the dog is made out of ginger. He’s known as the Conjure Man.

She somewhat unintentionally makes his acquaintance one day before work and he takes her to an open space at nearby Butler University, where she had gone to school. She notices that an old, giant oak tree is gone. John tells her that the library boss had it cut down: he didn’t like the shade it was throwing on his office.

John tells her the tree, which was ten thousand years old, had been his friend. It was a Tree of Tales and its destruction was symbolic of the world not having time for stories anymore. The wind would bring stories worth knowing and each one would make the tree grow.

He says that stories “become the voice of a country, or a race. Without them, people lose touch with themselves.” The stories that matter do more than entertain.

The tree is just a stump now, but a vision of it full grown, shimmering with light, appears before Wendy. Later, Wendy ends up with an acorn from the tree and her friend tells her she needs to plant a new Tree of Tales. Which she does. And Wendy tells the little potted sapling stories to make it grow. And it begins to catch stories on its own. 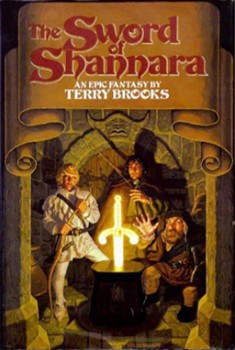 Obviously, de Lint weaves a spell with words as he tells the story. But of all the tales in this anthology, this one (along with Pratchett’s, just because I love his stuff) resonated enough to stick with me for over twenty years. It’s about the magic of stories. As writers, we know, when our work is good, there’s “something” there. It’s more than just words on the page or a pleasant diversion for someone. This story was about that. And it’s pretty neat.

Overall, I thought that his was an ok anthology. I’ve only read books by six of the twenty authors included Donaldson would use Reave’s tale as the title for a collection of stories a few years later, and the Cohen story is Pratchett in fine form. While I did like a majority of the stories, it hasn’t been a collection I go back to for re-reads. And I don’t know that this collection would give me a Tolkien fix, but “The Conjure Man” is absolutely a keeper.

Lin Carter famously savaged The Sword of Shannara in his The Year’s Best Fantasy Stories – 1978. His comments are actually rather amusing since he made a career off of riding Robert E. Howard’s Conan-sized back. Sword has been one of my five favorite fantasy books since I read it over thirty years ago. I like Moorcock, Erikson, Jordan, Cook and Kemp, among many others. But Sword remains near the top. And even haters will acknowledge that it is certainly a Tolkien-esque experience. More so than After The King.

And so are Dennis L. McKiernan’s Mithgar books, but that’s a discussion for another post.

Jeff – Dennis used to live here in a suburb of Columbus (OH). One day, I looked up his name in the phone book (we’re talking quite a few years ago) and called him. He invited me out to his house. He signed a bunch of his books that I owned and talked for a couple hours about other authors he liked and RPGing (he was an ICE guy, not D&D). Just a super nice guy.

I have mixed feelings about the Mithgar books. I don’t really care much about halflings/hobbits/warrows. And they’re mostly the center of his stories. But I still like the dwarves, elves, bad guys and world. So, I like Mithgar, but some books work better for me than others.

I think Dragon Doom rose above the rest and I’d like to write about that for a post some day.

I know. We had some…vigorous exchanges back in the day. Not Rolemaster vs D&D. (I was probably playing WFRP at the time, but I wasn’t fanatically for any system.) More Rolemaster vs not Rolemaster. (I was introduced to Rolemaster by a group with two rules lawyers. It was a bad experience.)

I also know about him being a super nice guy. Ego the size of a small moon, but super nice. Sent me unsolicited compliments on my writing, and he was specific.