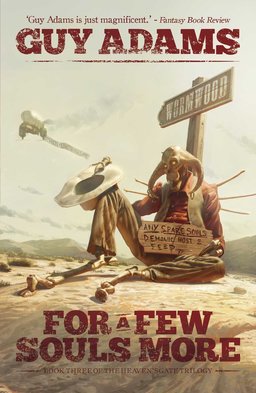 I’ve been waiting for the conclusion of Guy Adams’s Heaven’s Gate trilogy since the first installment, The Good The Bad and the Infernal, appeared in March 2013. The second volume, Once Upon a Time in Hell, was published almost exactly a year ago. It’s a gonzo Weird Western with demons, supernatural cowboys, and steampunk Indians.

In the third and final volume, For a Few Souls More, Heaven has fallen to Earth, joining the Union as the 43rd state… and the President sets out for the legendary town of Wormwood, the traveling community which appears once every hundred years for a single day.

The uprising in Heaven is at an end and Paradise has fallen, becoming the forty-third state of America. Now angels and demons must learn to get along with humans.

The rest of the world is in uproar. How can America claim the afterlife as its own? It’s certainly going to try as the President sets out for the town of Wormwood for talks with its governor, the man they call Lucifer.

Hell has problems of its own. There’s a new evangelist walking its roads, trying to bring the penitent to paradise, and a new power is rising. Can anyone stand up to the Godkiller?

This sounds a lot like some of the stories in John Joseph Adams’ Dead Man’s Hand anthology. The cover reminds me of Walter John Williams’ story within that volume called “The Golden Age.”

Ever since I played Pinnacle Entertainment’s Deadlands RPG, I’ve enjoyed Weird West settings … but you really had me at “steampunk Indians.”

That reminds me that DEAD MAN’S HAND should be a lot higher on my to-be-read pile. It had a great list of contributors, and I heard a lot of terrific things about it.

I never played DEADLANDS, but I was nonetheless quite taken with the system. It had a wide range of adventures that looked like a lot of fun.

Is is still being produced? I know there was a recent re-release.