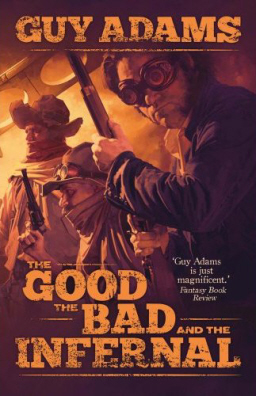 I’m pretty plugged in to the industry. Every week, I get a host of press releases, advance proofs, review copies, PR follow-ups, and other stuff that keeps me on top of the latest fantasy releases.

Or so I assume, anyway. Turns out there’s just no substitute for spending time in a good bookstore. Last Saturday, I was browsing the SF and fantasy section of my local Barnes and Noble and came across a number of surprises. Easily the most intriguing was Guy Adams latest: The Good the Bad and the Infernal.

Every one hundred years a town appears. From a small village in the peaks of Tibet to a gathering of mud huts in the jungles of South American, it can take many forms. It exists for twenty-four hours then vanishes once more, but for that single day it contains the greatest miracle a man could imagine: a doorway to Heaven.

It is due to appear on the 21st September 1889 as a ghost town in the American Midwest. When it does there are many who hope to be there: traveling preacher Obeisance Hicks and his simple messiah, a brain-damaged Civil War veteran; Henry and Harmonium Jones and their freak show pack of outlaws; the Brothers of Ruth and their sponsor Lord Forset (inventor of the Forset Thunderpack and other incendiary modes of personal transport); finally, an aging gunslinger who lost his wings at the very beginning of creation and wants nothing more than to settle old scores.

A weird western, a gun-toting, cigarrillo-chewing fantasy built from hangman’s rope and spent bullets. The West has never been wilder.

How the heck did I miss this? I may just have to clear the decks to try this one. Guy Adams released two other paperbacks through Solaris: The World House and its sequel, Restoration. The sequel to this one, Once Upon a Time in Hell, is scheduled for release in December.

The Good The Bad and the Infernal was published by Solaris Books on March 26. It is 318 pages and $7.99 in paperback, or $6.99 for the digital edition. Check out all the latest from Solaris here.

[…] covered several recent titles of note, including Juliet E. McKenna’s Dangerous Waters and The Good The Bad and the Infernal by Guy Adams. See? These guys are […]

[…] you noticed this burgeoning mini-trend of western-horror-fantasies, including Guy Adams’s The Good The Bad and the Infernal, Mercedes Lackey & Rosemary Edghill’s Dead Reckoning, and the Bloodlands novels of […]

[…] and Sherlock Holmes, The Army of Dr. Moreau (August, 2012). But it was his gonzo fantasy-western The Good The Bad and the Infernal, released in March, that really got my […]

[…] jazz club mystery Deadbeat: Makes You Stronger last October. But it was his gonzo fantasy-western, The Good The Bad and the Infernal, released last March, that really grabbed my attention and I’ve anxiously been awaiting the […]

[…] for the conclusion of Guy Adams’s Heaven’s Gate trilogy since the first installment, The Good The Bad and the Infernal, appeared in March 2013. The second volume, Once Upon a Time in Hell, was published almost exactly […]

[…] for the conclusion of Guy Adams’s Heaven’s Gate trilogy since the first installment, The Good The Bad and the Infernal, appeared in March 2013. The second volume, Once Upon a Time in Hell, was published almost exactly […]