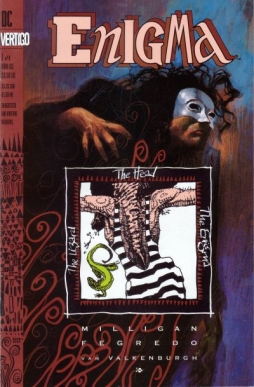 In 1990, the Walt Disney Company launched a new comics imprint, Disney Comics, to publish titles starring their cartoon characters; they’d previously licensed their characters to other comics companies, but the new imprint represented their own entry into the field. The venture met with some initial success and Disney began to plan further imprints, including one under former DC Comics assistant editor Art Young, which would be called Touchmark and feature creator-owned books for ‘mature readers.’ In this context, that meant something like ‘literary fantasy.’ At the time, DC had a number of books labeled for ‘mature readers’ which had gathered critical attention and good sales — among them, Neil Gaiman’s Sandman, Grant Morrison’s Doom Patrol and Animal Man, Jamie Delano’s Hellblazer, and Peter Milligan’s Shade the Changing Man. Young brought some of these writers over to the projected Touchmark line. Announced titles included a book written by Morrison with art by Steve Yeowell, Sebastian O, one by Milligan and artist Duncan Fegredo, The Enigma, and J.M. Dematteis and Paul Johnson’s Mercy.

Touchmark never published a book. Sales for the Disney titles had begun to drop, and all the projected imprints were cancelled. But the work wasn’t wasted. Young returned to DC, bringing some of the Touchmark books with him. There, editor Karen Berger was developing a publishing plan for DC’s ‘mature readers’ books, which would be grouped together along with some new titles as an imprint of their own, to be called Vertigo. The Touchmark titles fit in seamlessly, and helped increase the diversity of the new imprint: these weren’t just re-imagined DC characters, but something completely new. I want to write here a bit about one of those books: Milligan and Fegredo’s Enigma.

The Enigma is a difficult book to describe. It opens with a seemingly random sequence of events. A narrator — abrasive, confrontational, but unseen — fills captions with sarcasm and rhetorical questions. Improbable, bizarre things happen; characters react to them in weird, apparently inexplicable ways. But then as the story goes on things begin to link up. What seems deranged becomes coherent. Explanations slowly emerge. Even the identity of the narrator and the reason for that narrator’s tone become clear during the unwinding of the tale. It’s an incredible technical accomplishment that works as more than technique: the surreality breaks open your mind, and the slow-emerging explanations build around peculiar links, feeling like dreams or obsessions, all of it gaining inexplicable depth as it resolves itself into a kind of postmodern Freudian parable. With super-heroes. 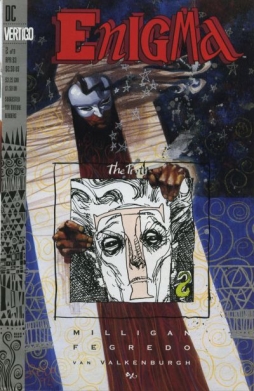 Let me try to be descriptive: After a prologue that hints at something bad happening twenty-five years ago, we’re introduced to Michael Smith, our main character. He shuffles through a routine existence, joylessly making love to his girlfriend every Tuesday, fixing phones and catching glimpses of more interesting lives. But the exploits of a serial killer called the Brain Eater fascinate him; he changes, making love with abandon, following a floating lizard to an apartment where he meets the monstrous killer and is saved by the strange masked figure called the Enigma — but only after suffering a near-death experience. Further villains appear: the Truth, Envelope Girl, the Interior League. Most of them coming from the pages of an old comic book Michael obsessed over as a child: The Enigma, of which only three issues were ever published. Michael tracks down the writer, a gay man named Titus Bird, now the centre of a growing cult. They try to understand what is happening, and why, and what it all means. And who is really a hero: the Enigma, you see, has killed the Truth.

Which last statement seems to move us closer to the main concerns of the story. I said above that it’s a postmodern play, and I’ll stand by that. Its subtext is its text: who or what is the Engima? What is the Truth, or interiority, or any of the things we think are at the heart of ourselves? As the book goes on, it calls into question identity and sexuality, suggesting that we build worlds and personae for ourselves out of desperation, shielding ourselves less from chaos than from emptiness. Religion and art and sexual politics and love affairs and the sense of self are all more or less sophisticated evasions. At the heart of all we think we know, there is really only an enigma.

In the end, the book lives up to its name. You can read it in many different ways: as nihilism or conversely as an insistence on the importance of humanity and human contact. As an affirmation of love, or a bitter mockery of the idea of choice and consent. Can childhood fascinations lead to potential salvation, or are they illusions that must necessarily be shattered? It is not surprising that the characters go off to a final confrontation and leave the narrator behind. The point, from one point of view, lies in the choices they have made to get to that point — but what choices have they made, really? The power of the Enigma is vast, influencing minds. What value any choice we think we make? 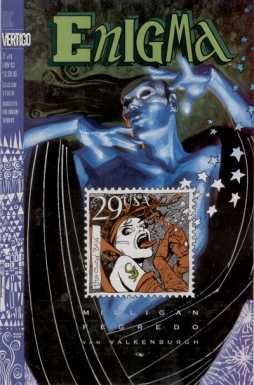 In retrospect, I think Milligan might have been the most uncompromising of the first wave of Vertigo writers. Most of them were working with cultural references — to literature, politics, alternative culture — which other American super-hero writers were either uninterested in or chose not to use in their mainstream comics. But Milligan I think went further than most in bringing a kind of Pynchonesque postmodern sensibility to his work, quite different than Gaiman’s interest in myth or Morrison’s fascination with pop. Milligan was not only unrelentingly strange, he demanded more in terms of active involvement from the reader. (And if you had told me when The Engima was coming out that he’d be taking over X-Force at the same time as Morrison was writing X-Men, I would not have believed you for a moment.)

Duncan Fegredo’s work on The Enigma was perfectly appropriate to the book, filled with odd angles and scratchy sketch-like lines that define shapes with a casual felicity. His character work is strong; his characters have a human reality to them, in their facial expressions and posture and acting, that helps anchor the book. Fegredo’s sense of character gives The Enigma an emotional heft that the glacial wit structuring the work perhaps needed. His fight scenes were sometimes unclear in their staging, but even that tended only to emphasise that the fights were not the heart of the work. Worth noting here is the work of colorist Sharon Van Valkenburgh; computer colouring was still a relatively new technology at the time, and Vertigo as an imprint swiftly became known for muted (or dull) palettes — but I felt Van Valkenburgh worked well with the line art, growing subtler as the book went on, adding clarity and supporting the emotional tones of the scenes.

The Enigma feels like a creature of its time, in terms of its approach to storytelling, but that’s not to say it’s dated. It’s worth remembering, not because it’s an easy book, but because it’s difficult and asks difficult questions. In a way, I wish it had been the spearhead of an imprint like Touchstone promised to be — it might have benefited from the attention, and I wonder whether having two Vertigo-style imprints from two separate major publishers might have been more beneficial for the comics field in the long run. In the end, it wasn’t to be. But at least the comic itself came out, and is a thing that exists in the world: something troubling and difficult to define, the engima it names itself.

I remember following this series when it originally came out and it’s still one of my favorite comics of all time.