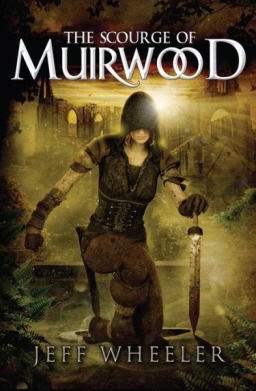 Over the last few months, 47North has become a publisher to be reckoned with.

Founded in October 2011 as the seventh imprint of Amazon Publishing, 47North — named for the latitude of Amazon’s headquarters in Seattle — publishes science fiction, fantasy, and horror. In just 18 months, they’ve created an extremely impressive catalog, including a lot of terrific fantasy.

Recent releases include Ania Ahlborn’s Seed, B.V. Larson’s Technomancer, Megan Powell’s No Peace for the Damned, the anthology Oz Reimagined: New Tales from the Emerald City and Beyond, edited by John Joseph Adams and Douglas Cohen, all three volumes in Jeff Wheeler’s Legends of Muirwood trilogy, and many others.

One of their most ambitious endeavors is The Foreworld Saga, a multi-volume historical fantasy epic chronicling the birth of Western Martial Arts by Neal Stephenson, Greg Bear, Mark Teppo, and an ensemble team of authors. Begun as a series of online stories, the complete saga has been re-packaged in three handsome novels and an ever-increasing number of shorter works.

47North has also heavily supported Amazon’s Kindle with Kindle Serials, a group of serial novels instantly delivered to readers as they’re published. So far they include Gooseberry Bluff Community College of Magic: The Thirteenth Rib by David J. Schwartz, The Outer Rims by Clint Morey, and The Scourge by Roberto Calas.

Near and dear to our hearts, 47North have also proven to be avid supporters of short fiction, publishes a fine assortment from a number of writers, including “Oz Reimagined: The Boy Detective of Oz: An Otherland Story” by Tad Williams and “Seer: A Foreworld Sidequest” by Mark Teppo.

Their website also highlights some very intriguing upcoming fantasy, including Romulus Buckle & the City of the Founders by Richard Ellis Preston Jr, the first volume in The Chronicles of the Pneumatic Zeppelin: Ania Ahlborn’s The Shuddering: and Mark T. Barnes’s The Garden of Stones.

With all the recent bad news in the publishing world, it’s good to see some innovative and exciting work coming from relatively new publishers. Try them out, support the writers you like, and help 47North have a long and storied career in fantasy.

[…] Amazon’s new fantasy, SF and horror imprint, launched with considerable fanfare in October 2011, and I’ve been watching it with interest ever […]