Talisman is a fantasy board game that first came out about twenty years ago. There have been a couple editions and multiple expansions. In December of 2008, Fantasy Flight Games released a revised fourth edition, for which expansions are still being produced.

In 2012, Thumbstar Games released Talisman: Prologue, a sort of ‘Talisman Light’ ipad app. It was a one-player game and was a decent translation of the board game, though not very absorbing.

In 2014, however, Nomad Games released Talisman: Digital Edition, which is a full-blown, 1-4 player game. It’s a fine adaptation of the original.

In Talisman, you move around a board, usually drawing an adventure card when you land in a space. You might encounter an enemy, an ally, a spell, an item, or an event. The goal is to work your way into the center of the board, where you can claim the Crown of Command. There are variations, but that’s the gist of it.

The game comes with fourteen characters to choose from. Each has a few characteristics. For example, the knight starts with a sword and armor, can add up to 2 to a die roll after praying and can’t have his alignment change. The characteristics generally reflect the character type, be it assassin, troll, or wizard. 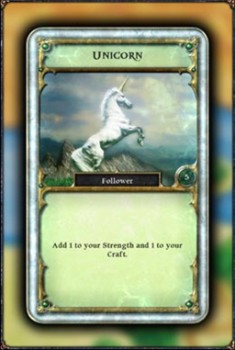 There aren’t levels or hit points, per se. When in combat with an enemy or another player, characters roll a die and add it to either their Strength (melee) or Craft (magic). Items, allies and spells can be added to your score as well.

Win, and you get the monster, which has an encounter number between 1 and 3. When you’ve got seven encounter levels “in hand,” you can trade them in for one Strength or Craft point, as appropriate. That’s essentially how you level up.

If the dice roll ends up in a tie, it’s a stand off and the turn ends: no harm, no foul.

Lose the encounter and you lose one life.

Basically, you roll the dice, decide where on the board you want to go (you can go clockwise or counter-clockwise and sometimes you can move between the Outer, Middle and Inner regions). The space you land in tells you whether to take an adventure card or roll the dice to determine some outcome; such as be turned into a frog or gain one gold.

You resolve whatever that space requires and then the other person goes.

There have already been three expansions. In addition to some creepy cards in the usual categories (Enemies, Spells, etc) The Reaper adds the Grim Reaper to the game, which players may encounter to differing effects. This pack includes four new characters among its 133 cards.

The Frostmarch expansion adds an Ice Queen theme to the game. There’s the usual mix of 135 new cards, including four new characters and three alternate endings.

The just-released The Dungeon pack has over 150 new cards, including five new characters. More noteworthy is that it includes a new board that affixes to a corner of the base board. This gives a new area to explore, though game play is essentially the same.

Visually, I like this game. The board is an accurate reproduction of the original game and it looks as if it is floating; gives it a magical feel. It’s big enough on the ipad and you can zoom in on spaces and cards, which helps.

Game play is pretty simple: you’ll figure this one out pretty quickly. I usually play for fifteen or twenty minutes then start again with a different character, just to try them out.

I like the clean look of this game, the readability of the cards, the variety of things to encounter in the adventure deck (especially with the three expansions added in) and the sound of the dice shaking and rolling: reminds me of backgammon.

I have one major complaint. I have not yet finished a game. It seems like a perpetual loop of going around the outer board, trying to build myself up. And that takes quite a while. Well, it does for me, at least. It’s just kind of an endless pattern. If I got serious about it, I suspect I could figure out how to do better in the middle region and try to work to the Crown.

As far as board game adaptations go, this is a pretty darn good one. If you like the board game, I think you’ll absolutely be pleased. I never played it on a board, but I give this two thumbs up as a solid fantasy board game app.

At $4.99 for the base game, it’s reasonably priced: especially considering how many characters it comes with. Assuming that Prologue is even still available, I wouldn’t recommend it, as the Digital Edition is certainly the better of the two.

I’m almost certain there will be more expansions coming, so the value of the base game should only increase in 2015.

So, pass on a triple grande Tasmanian dairy free frappa-latte at Starbucks one day this week and plunk down $4.99 and see what you think of Talisman.

Also, just before Thanksgiving, another Fantasy Flight board game was released at the appstore: BattleLore Command. It’s a turn-based fantasy tactical game. You might give that a look as well.

And he’s been an RPG fan and gamer since the seventies.

Since writing this post, I gave the app for The Witcher board game a try. Maybe EuroGame RPGing isn’t my thing, but it didn’t do too much for me and I deleted it.