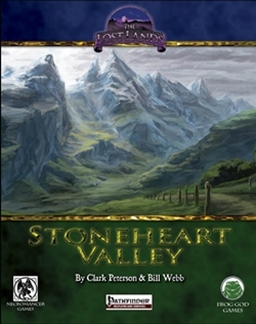 On the opening day of Gen Con 2000, Third Edition Dungeons and Dragons was unveiled. That same day, Necromancer Games released The Wizard’s Amulet, more or less the second OGL/D20 adventure (that’s another discussion).

Necromancer, working with other companies such as White Wolf, Judges Guild, and Kenzer and Company, became one of the most successful d20 companies. Their mega dungeon, Rappan Athak, is one of the best known Third Era adventures.

With the advent of Fifth Edition D&D, Frog God is now publishing for both lines (in addition to retro-clone, Swords & Wizardry). Necromancer and Frog God adventures and supplements had loosely been connected in that they took place in Webb’s personal campaign world.

Frog God is currently putting out that campaign world under the moniker The Lost Lands. It is going to incorporate nearly everything produced by Necromancer and Frog God Games. Some products, such as their Judges Guild updates and the Hex Crawl Chronicles, belong to other folks and won’t be included. But if you look at the long list of products, there’s an awful lot, including Gary Gygax’s under-appreciated Necropolis. 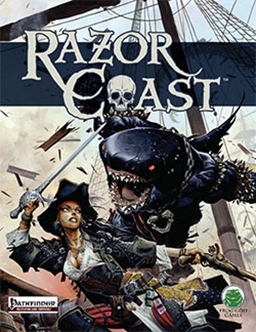 While the actual campaign book is due out sometime in 2015 (I believe), they’ve been releasing Lost Lands modules, such as Stoneheart Valley (which contains my all-time favorite adventure, The Tomb of Abysthor) and The Lost City of Barakus through Kickstarters. Recently, one of Necromancer’s long rumored projects, The Sword of Air, was funded for The Lost Lands.

Meanwhile, newer products such as the kickstarted Rappan Athuk (for Pathfinder), the epic Slumbering Tsar series and the ill fated but ultimately successful The Razor Coast, will all be part of this world.

There are several campaign worlds for Pathfinder, with Paizo’s own Golarion and Kobold Press’s Midgard two of the most popular. But with the back catalogue of Necromancer available, added to the impressive output of Frog God Games (check out the Northlands saga), The Lost Lands looks to be awfully meaty.

Though some of it is a bit dark for me, I’m a big fan of Necromancer/Frog God: especially the history they’ve built into their products. And because one can never have enough monsters, you should check out their Tome of Horrors Complete: all three of their third edition Tome of Horrors books, Pathfinderized, with over 800 pages of monster goodness….err, badness.

Without getting into all the sordid details, Razor Coast was Nick Logue’s eagerly anticipated, well (crowd source) funded project that vanished, leaving some loud, angry RPGers holding the bag.

When Lou Agresta and company revived the project, they worked diligently to make good to those who had gotten shafted during the initial Razor Coast.

It was actually a pretty impressive effort on Lou’s part.

Frog God produced another quality product and a once lost mega-campaign was out in the marketplace. If you like tropical islands and nautical-based adventures, it’s for you. It’s 546 pages and there are a few additional products related to it.

For anyone interested in Sword & Sorcery campaign worlds, I also recommend “Primeval Thule”. It’s a continent in the world of Kulls Atlantis and Conans Hyborea, set on tropical Greenland. It has it it’s own distinctive character and has close ties to the Old Ones and creatures of Lovecraft that Howard only occasionally hinted to. Quite well done and clearly worth a look.

Both Frog God and Necromancer are incredible companies, and Bill Webb is a great designer, person, and RPer. I can’t say enough good things about them.

The most pulp-like RPG setting (outside of Conan) that I’ve come across is the World of Xoth campaign. I think they evolved into Pathfinder rules, but aren’t too difficult to convert.

Frog God Games continues to develop the Lost Lands, with products for Pathfinder, Swords and Wizardry and D&D 5th Edition.

I’ve already received the kickstarted Quests of Doom, a collection of 18 adventures (6 Necromancer Games updates, 12 new ones) that are compatible with The Lost Lands.

[…] they make RPG products for Pathfinder, 5th Edition and Swords & Wizardry. Way back in 2014, I wrote here about The Lost Lands, the campaign world that would synthesize almost all of the Necromancer and […]

And, after Cults of the Sundered Lands successfully kickstarted, The Borderlands rolled out at KS. It’s off to a great start. The Lost Lands is shaping up to be a whale of a campaign world.