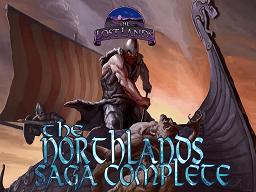 The Vikings are coming!

I’m a fan of Frog God Games. Rising from the ashes of Third Edition D&D’s Necromancer Games, they make RPG products for Pathfinder, 5th Edition and Swords & Wizardry. Way back in 2014, I wrote here about The Lost Lands, the campaign world that would synthesize almost all of the Necromancer and FGG products — from classics like Rappan Athuk and Gary Gygax’s Necropolis to newer deadly adventures like The Slumbering Tsar saga.

I’ve happily backed several Lost Lands Kickstarters the past few years (including Sword of Air, Cults of the Sundered Kingdoms) and there’s been a ton of Pathfinder goodness for me (Don’t let the list price put you off — the PDFs are more affordable). The latest Lost Lands Kickstarter, which wraps up October 2 (and is 75% funded as I type this) is one I have anxiously been awaiting.

In 2010 and 2011, Frog God released the first four modules in Kenneth Spencer’s series set in the Northlands. The first two had a bit of an American Eskimo feel, then moved into pure Viking territory in the third and fourth. You can read my thoughts on the series here.

Then, the modules stopped coming. Greg Vaughan, Pathfinder Creative Director (and author of the previously mentioned Slumbering Tsar epic), told me that The Northlands was on hold and that it would become a separate campaign book for The Lost Lands. So, I waited… and waited…. and waited. Wait no more! Coming in at an estimated 850 pages, The Northlands Saga Complete will include a campaign source book with color map, the four previously published adventures and six brand new ones. And of course, there are stretch goals, which include even more adventures. The whole saga results in the standard Pathfinder 1st-20th level Adventure Path. About Vikings and the frozen tundra (no, not Lambeau Field)!

With names like Vengeance of the Long Serpent, Beyond the Wailing Mountains and The Death Curse of Sven Oakenfist, you know you’re in the Northlands!

Several Black Gaters are longtime fans of Necromancer and Frog God Games (hmm… a post on the companies’ history would be interesting reading) and will attest to the high quality of Frog God’s products. If you back this, you can be pretty certain you’ll get what you were promised in a timely fashion. And with the size of the back catalog available, The Lost Lands is shaping up to be an incredibly vast, detailed campaign world. Along with the epic, it will also host some great mini-campaigns, like the Kickstarted The Lost City of Barakus. Plus, you can drop in other Frog God adventures, such as the Kickstarted Quests of Doom, with no trouble at all.

If you’ve got a hankering for some good old fashioned Viking adventuring, check this one out. You won’t be disappointed. And if you ever find yourself wishing you had another good Bestiary, the only one you’ll ever need to add is Frog God’s The Tome of Horrors Complete.

Previous RPG-related posts by me (I hope to do a lot more, thus this tiny list!):

This project is at 96.7% funding with three days to go. If you like Pathfinder and Vikings, go check it out and think about backing it. I guarantee it will be top quality.

And, this has funded ($62,000!) and is moving towards stretch goals before closing at midnight on Thursday.

That famous “end of project” burst is coming through and three stretch goals have been met, with a fourth on the cusp.

Really, head over and give this a look. Today’s your last chance!