The Sands of Al-Kalim is one of the ‘big box’ expansions for Runebound. As opposed to the smaller, ‘card-only’ expansions, these come with a new board. You lay this board over the original game board and it completely changes the terrain. Islands, the frozen north: you get the idea. There are also other components that add to the mechanics, encounters, etc.

Not surprisingly, The Sands of Al-Kalim adds a desert/Ali Baba type of theme to the base game. There are several game play modifications (boy, does exhaustion become a factor!) such as choosing to move at day or night.

But one fundamental change is when you move onto a hex with an Adventure Counter. Now you have two additional options. You can roll the Story die or possibly undertake a Legendary Adventure.

The Story die is one Movement die. You roll it and for all the symbols that show (each side of a Movement die has either 2 or 3 symbols) you experience the effects from the Story die table. For example, if you rolled a road, there’s a paragraph that explains you found 1 gold hidden in the ground.

If there’s also a well, you refresh yourself and remove all of your exhaustion counters. You might even find a lost city with some nice benefits. There can also be negative story effects, but not many. 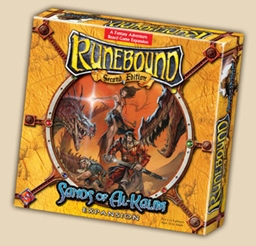 Problem is, you don’t get much needed experience when you roll the Story die; as opposed to taking an Adventure Card. However, if you’re beat up and not looking forward to a fight, it’s a nice alternative.

To win the game, you must complete four Legendary Adventures; each comes with a Legendary Treasure. Depending upon how much experience you’ve traded in, you can draw a Legendary Adventure card and set about resolving it. For example, you might have to resolve an Adventure Card in the Celestial Plateau and then succeed in three successive skill tests.

By changing the endgame and your options when you land on an Adventure Counter, The Sands of Al Kalim significantly increases the replayability factor of the original game. It also includes new heroes and allies along with all new monsters and encounters. It’s not an entirely new game, but it is certainly an expanded one. I mentioned that I like the different method of movement in this game and adding to the options after moving just increases that for me.

The Island of Dread brings ships and captains into the mix, while The Mists of Zanaga has a lizard man/swamp theme with an old god awakening. I like the smaller card set expansions for adding in new treasures, monsters, etc. But Fantasy Flight put a lot of thought into the big board expansions and they significantly add to the base game experience.

This PC won’t let me edit my posts, but here’s the link to the original Runebound post: http://www.blackgate.com/2014/08/04/the-public-life-of-sherlock-holmes-rpging-with-a-board-runebound/